Irvin S. Cobb was a famous writer. He was also in the movies, and he made two-reel comedies for Hal Roach.

Cobb was the second of four children born to Kentucky natives in Paducah, Kentucky. His grandfather Reuben Saunders, M.D., is credited with discovering in 1873 that hypodermic use of morphine-atropine halted cholera. Cobb was raised in Paducah, where the events and people of his childhood became the basis for much of his later works[citation needed].
Cobb was educated in public and private elementary schools and then entered William A. Cade's Academy intending to pursue a law career. When he was 16, his grandfather died and his father became an alcoholic. Forced to quit school and find work, he began his writing career.

He started in journalism on the Paducah Daily News at age seventeen, and became the nation's youngest managing news editor at nineteen. He later worked at the Louisville Evening Post for a year and a half.
His anecdotal memoir "Exit Laughing," includes a firsthand account of the assassination of Kentucky Governor William Goebel in 1900 and the trials of his killers.
Moving to New York in 1904, Cobb was hired by the Evening Sun. It sent him to Portsmouth, New Hampshire to cover the Russian-Japanese peace conference. His dispatches from the negotiations, focusing on the personalities involved (including President Theodore Roosevelt) were published across the country under the title "Making Peace at Portsmouth". They earned him a job offer from Joseph Pulitzer's New York World that made him the highest-paid staff reporter in the United States.[1]
Cobb covered World War I for the Saturday Evening Post, and wrote a book in 1915 about his experiences called Paths of Glory. He wrote numerous series in periodicals and also collaborated on dramatic productions.

Several of Cobb's stories were made into silent films. He also wrote the screen titles for a couple more, including the Jackie Coogan vehicle Peck's Bad Boy (1921). When sound came in, more of his stories were adapted into films, including The Woman Accused (1933), starring a young Cary Grant.
John Ford twice made films based on Cobb's Judge Priest stories: Judge Priest (1934), featuring Will Rogers in the title role, and The Sun Shines Bright (1953), based on the short stories "The Sun Shines Bright", "The Mob from Massac", and "The Lord Provides".
Cobb also had an acting career, appearing in 10 films between 1932 and 1938, with starring roles in such movies as Pepper, Everybody's Old Man (1936), and Hawaii Calls (1938). He was also host of the 6th Academy Awards in 1935.[2]

Cobb has been described as having a round shape, bushy eyebrows, full lips, a triple chin, and always having a cigar in his mouth.[1]
He married Laura Spencer Baker of Savannah, Georgia.
His daughter Elizabeth Cobb[3] (born 1902) was an author in her own right. She published the novel She Was a Lady and My Wayward Parent (1945), a book about her father. Her first husband was Frank Michler Chapman, Jr., son of the ornithologist Frank Michler Chapman.
Cobb's granddaughter was Buff Cobb, a TV personality of the early 1950s, and second wife of journalist Mike Wallace.[3] Cobb was honored in 1915 with the march "The War Correspondent" by G.E. Holmes, published by the John Church Company.

Irvin S. Cobb wearing a coonskin cap and smoking a cigar.
Illustration by Tony Sarg for "The Glory of the States: Kentucky" by Irvin S. Cobb, published in The American Magazine in May 1916.
When Cobb died in New York City in 1944, his body was sent to Paducah for cremation. His ashes were placed under a dogwood tree. The granite boulder marking his remains is inscribed "Irvin Shrewsbury Cobb 1876-1944 Back Home".
Cobb wrote a letter detailing his desired funeral arrangements. The document reads in part: "Above all I want no long faces and no show of grief at the burying ground. Kindly observe the final wishes of the undersigned and avoid reading the so-called Christian burial service which, in view of the language employed in it, I regard as one of the most cruel and paganish things inherited by our forebears from our remote pagan ancestors. In deference to the faith of our dear mother who was through her lifetime a loyal though never bigoted communicant of that congregation, perhaps the current pastor of the First Presbyterian Church would consent to read the Twenty-third Psalm, which was her favorite passage in the Scriptures and is mine since it contains no charnel words, no morbid mouthings about corruption and decay and, being mercifully without creed or dogma, carries no threat of eternal hell-fire for those parties we do not like, no direct promise of a heaven which, if one may judge by the people who are surest of going there, must be a powerfully dull place, populated to a considerable and uncomfortable degree by prigs, time-servers and unpleasantly aggressive individuals. Hell may have a worse climate but undoubtedly the company is sprightlier. The Catholics, with their genius for stage-management, handle this detail better. The officiating clergyman speaks in Latin and the parishioners, being unacquainted with that language are impressed by the majesty of the rolling, sonorous periods without being shocked by tressing allusions and harrowing references."

Cobb is best remembered for his humorous stories of Kentucky local color. These stories were first collected in the book Old Judge Priest (1915), whose title character was based on a prominent West Kentucky judge named William Pitman Bishop. Among his other books of humor are Speaking of Operations (1916) and Red Likker (1929).
Joel Harris wrote of these tales, "Cobb created a South peopled with honorable citizens, charming eccentrics, and loyal, subservient blacks, but at their best the Judge Priest stories are dramatic and compelling, using a wealth of precisely rendered detail to evoke a powerful mood."[1]
Cobb also wrote short stories in a horror vein, such as "Fishhead" (1911) and "The Unbroken Chain" (1923). "Fishhead" has been cited as an inspiration for H. P. Lovecraft's The Shadow Over Innsmouth, while "The Unbroken Chain" was a model for Lovecraft's "The Rats in the Walls".[citation needed] The former was described by Lovecraft as "banefully effective in its portrayal of unnatural affinities between a hybrid idiot and the strange fish of an isolated lake" in his essay Supernatural Horror in Literature.[4]

It's been said that today Irvin S. Cobb is remembered mainly for his famous horror story FISHHEAD, the tale of a black man murdered by two white men, who afterwards are eaten up by the catfish that had been Fishhead's friends.  But Irvin S. Cobb is also remembered for his contributions to classic comedy films as well, particularly those of his friend Will Rogers.


Here we see him with Hal Roach. 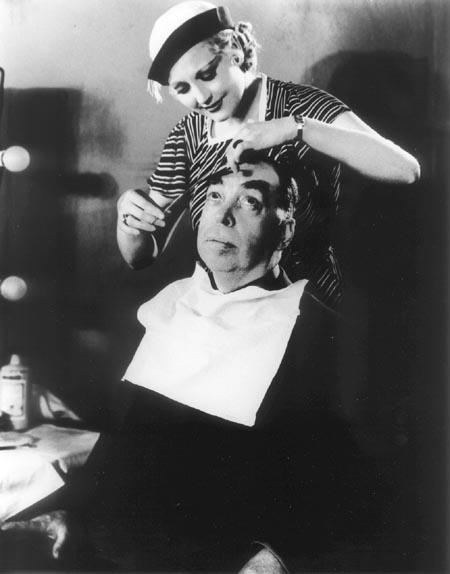 Another version with director Gus Meins. 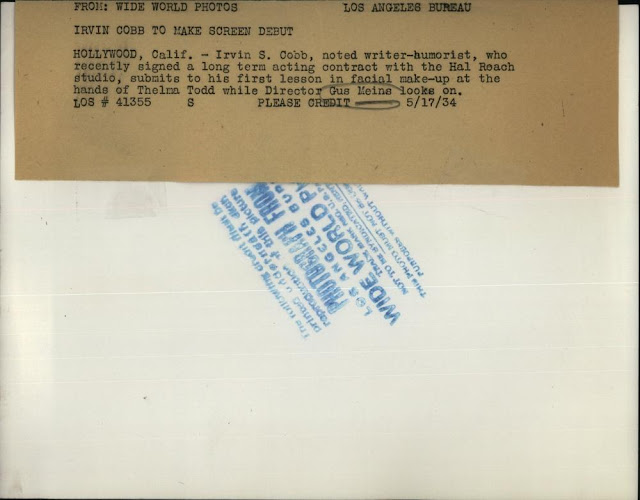 Gus Meins was also in the home movie footage of Thelma Todd and Patsy Kelly at the Brown Derby, and he turns up in a number of publicity pictures with Thelma Todd from this period.
The same picture was used again in an ad for the Irvin S. Cobb series. 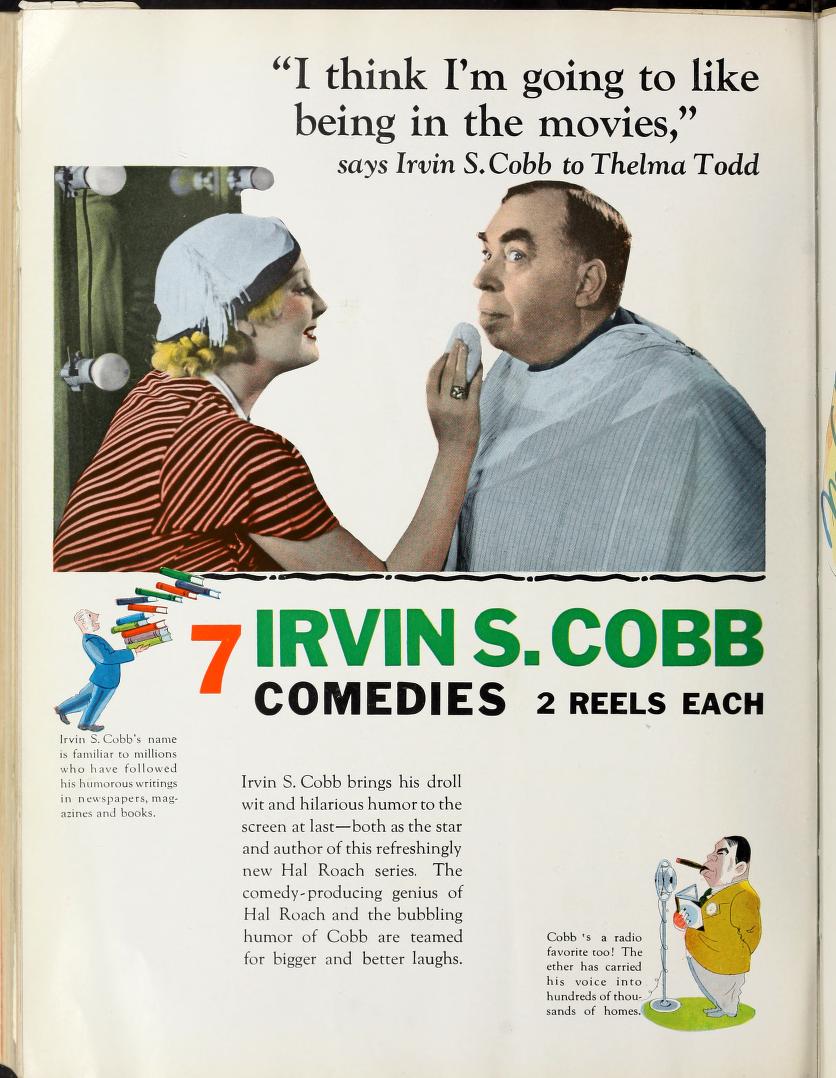 Another ad promotes the Irvin S. Cobb series along with the other series Roach was producing at the time. The Irvin S. Cobb series didn't last, but Roach was easing into features in the thrities, till finally only Our Gang continued at Roach. And then that series was sold to MGM. The era of two reel comedies would finally come to an end in the late fifties with the close of the Columbia short subjects department.
In 1935, theater owners voted Shirley Temple the No. 1 box-office star in America, and the Academy of Motion Picture Arts and Sciences presented her with a miniature Oscar. Here we see Irvin S. Cobb with Shirley Temple, who is holding her Oscar.

Irvin S. Cobb as one of a number of stars depicted in Disney's THE AUTOGRAPH HOUND ( 1939 ), a Donald Duck cartoon. 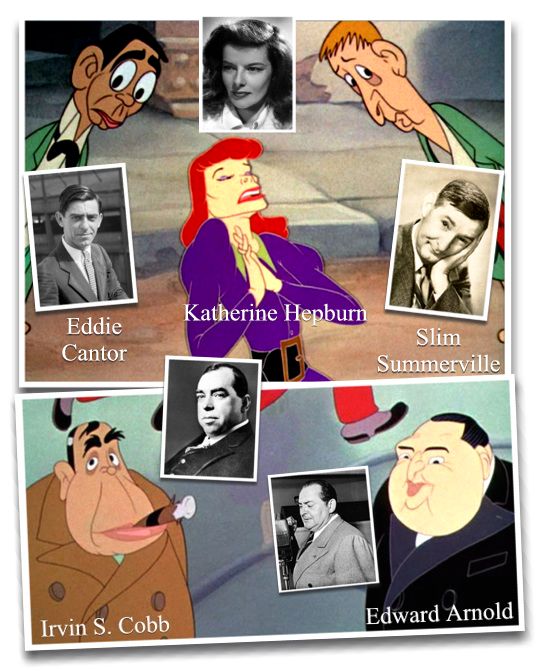 An autographed picture from 1940. STEAMBOAT ROUND THE BEND features a race between two steamboat captains, played by Will Rogers and Irvin S. Cobb.