YOU MADE ME LOVE YOU Item


YOU MADE ME LOVE YOU was a movie Thelma Todd made in England with Stanley Lupino ( the father of Ida Lupino ) in 1933. Here is a publicity item about this movie that was published in an Australian newspaper. 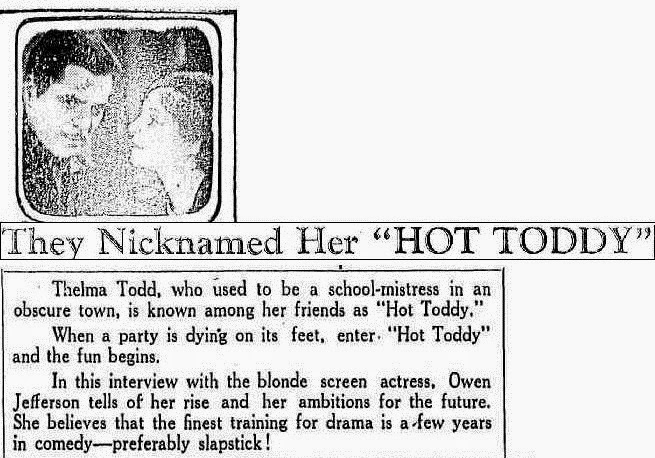 FROM a schoolroom in n little New England town to a beauty contest in Boston is a stop for any young girl. From there to Hollywood, geographically or otherwise, is a leap. But that is what happened to Thelma Todd. And my teachers didn't look like Thelma when I went to school ! Thelma won the contest, but that is not how she crashed into films. Somebody, is her home town recommended her to Jesse Lasky, who gave her a test in Boston. She signed a contract with him for pictures the day before she represented the local Elks and became Miss Massachusetts. It is difficult to imagine Thelma, chatting with her, as I did on the set between "shots" one afternoon, adding sums at the blackboard with a piece of chalk in one hand and a ruler in the other. It is equally difficult to imagine her stepping from a comedy on which she was working that particular day into the role of Dennis King's leading lady in the romantic opera "Fra Diavolo." Thelma is like that. One of the most varying girls I've met. From slap-stick to drama and back is all in the day's work. She first stepped from comedy to straight dramatic work as Chester Morris's leading lady in 'Corsair' (for which picture she called herself Alison Lloyd), and made good. She has played dramatic leads since, but they have not spoiled her sense of comedy or made her too much the grand actress to return to a physical entanglement with Zasu Pitts for the sake of a laugh in their slap-stick two.reel comedies.
Thelma, Zasu, and the director were engrossed in a heated argument about a story when I first reached the set. Thelma wanted Zasu to swing across the set carrying a shopping basket. Zasu was willing, but the director couldn't see it that way. I had missed most of the details. I did gather that next week's story was in the process of creation, They seemed to work informally — sort of improvise as they went along. We write our own stories, '"Thelma replied to my question; "At least, we suggest situations," Zasu put in.


"And you see how far it gets us," Thelma added. The director had already vanished, Zasu trailed off to lunch. Thelma and I sat on the side-lines to chat. Watching her several days before in a scene from "Fra Diavolo," I was inclined to think her a little affected. This impression was corrected almost as soon as I talked to her. "I have two more comedies to make under my present contract," she told me. 'Eventually I want to do straight dramatic roles entirely, but comedy is excellent training for that sort of thing. "I played several dramatic roles when I first entered pictures and I was awful.


I managed to look and act as I was supposed to," she explained, "but there was no feeling. Nothing up here,' she illustrated by pointing an index finger to her. head. '"It was like an imitation of an actress giving a dramatic performance. I hadn't the faintest idea what I .was doing or why. "Comedy is good training," she repeated, "because it teaches one to react quickly. A two-reel slapstick comedy has to clip off action every minute. Every situation calls for a reaction, A broad and quick reaction which everybody will understand in a flash. WHEN you come to a dramatic role later and you have reels in which in which to work up to a reaction, you can do it more subtly. You know the steps, the grades, of the emotion you are registering. You can suffer through an entire reel if necessary with varying changes, working up to your climax gradually. "Comedy,' she continued, " teaches one to act and think quickly, to be alert every moment. For example, if Zasu kicks me in the seat, I must look. both surprised and probably hurt . . . and then run after her . . . all in a brief second, I think it is the best training in the world, and I wouldn't take anything for my experience in comedies." At this point Thelma was called away for a close-up, and I lost her completely.
Hours later she returned to the set for another scene in what appeared to be an extremely smart tea-gown. The top was chartreuse green, the skirt black silk. It fitted her like paper on the wall. Thelma has one of those figures, anyway. Her colored maid handed her an immense powder puff to repair her make-up. Thelma has left Hollywood for the time being and has made one picture in England for B.l.P. so far. It is named "You Made Me Love You." Stanley Lupino has the male lead in this film, which will be shown at the Prince of Wales on May 25.


STANLEY LUPINO AND THELMA TODD in two scenes from 'You Made Me Love You,' commencing a season at the Prince of Wales Theatre on May 25. 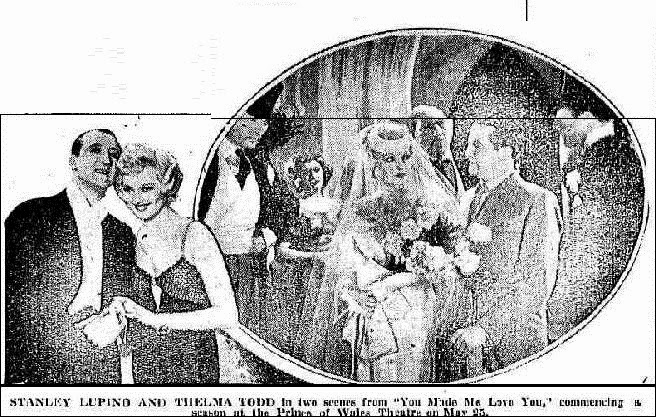 Thelma Todd and Zasu Pitts were no longer working together during the period when YOU MADE ME LOVE YOU was being made in England.

Email ThisBlogThis!Share to TwitterShare to FacebookShare to Pinterest
Labels: Stanley Lupino, YOU MADE ME LOVE YOU