Violence Against Women In The Comics 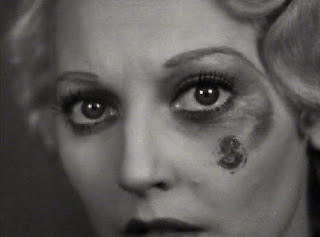 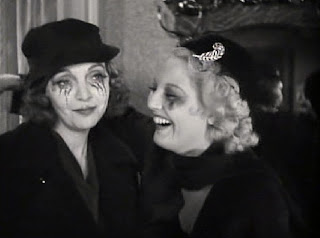 But she laughs it off, so we know it's not supposed to be serious. 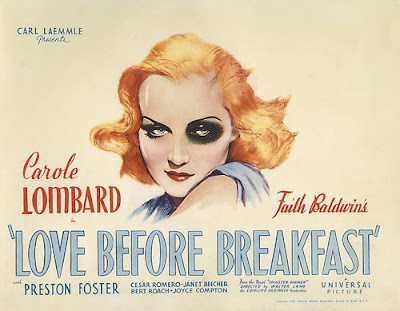 You had your choice of Black-eyed Carole in Landscape format 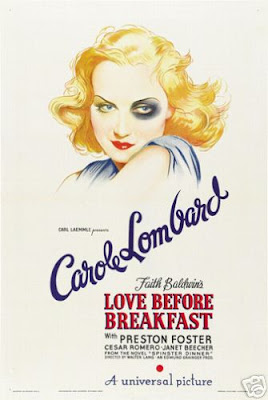 Then there's this even more unlovely version, which switches the black eye over to the other side: 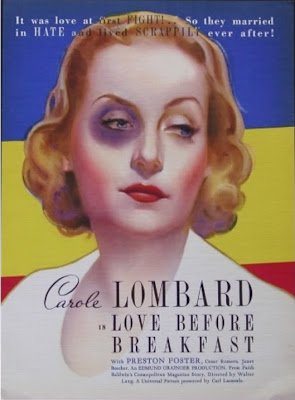 I wouldn't want to have to look at something like that across the breakfast table. Give me the good old-fashioned Carole Lombard with eyes the way they were meant to look, any day! 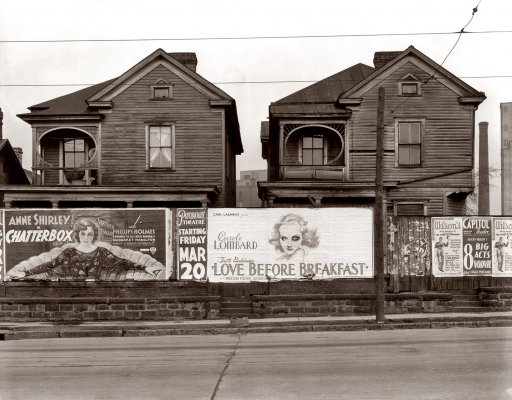 Period photograph shows us the view passers-by would have had of this poster.


"The Spirit"gave his girlfriend a black eye, too. I thought it was probably because of Carole Lombard, but I don't know if Will Eisner ever remarked on that business. 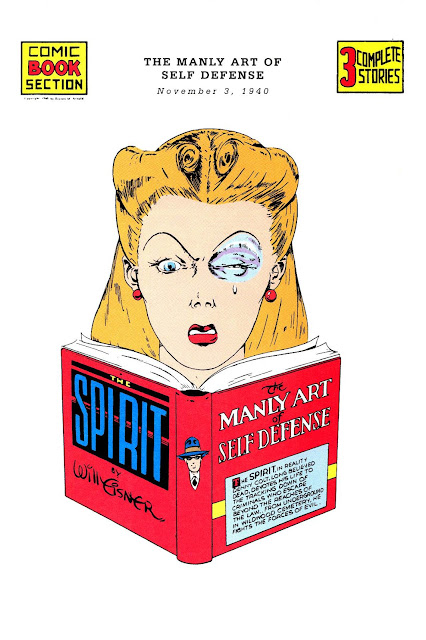 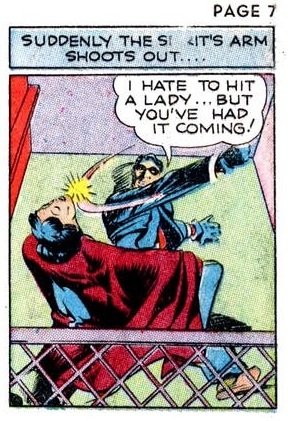 Unlike what happened in last issue, this girl was a villian. But if he didn't like to hit a lady, what did he keep doing it for?

Here are a couple of other scenes of The Spirit in action. 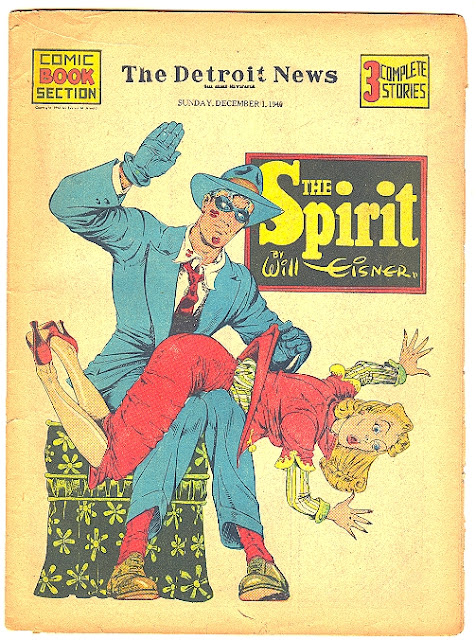 spirit_12-01-1940
An odd scene that seems typical of this character. The implication is that the girlfriend is being spanked for kissing "The Spirit". 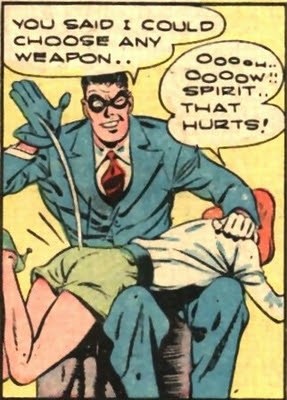 He's at it again. Of course, the expression on his face lets us know it's all a joke. Not that that really helps. The girl isn't supposed to think it's fun.
It is frequently said that his female characters were supposed to resemble glamour girls of the period, so Eisner probably did think he was doing something similar to what he had seen on the screen. The spanking business was in the movies of the time. And there was more than that. It was considered "manly" in the movies to slap the women around.

Are modern comics any different?

I don't think they use the spanking business any more, but there's still a lot of violence against women in comics. If anything, it's worse than ever. 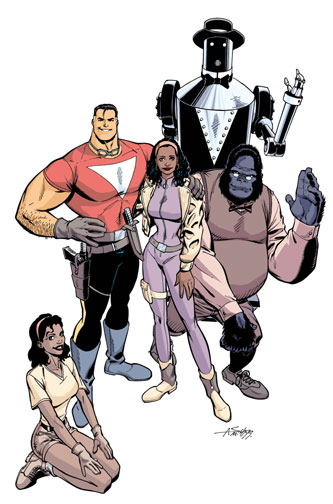 This is "Tom Strong", a sort of Doc Savage ripoff. What's wrong with this picture? It's not this one so much, it's what comes next. 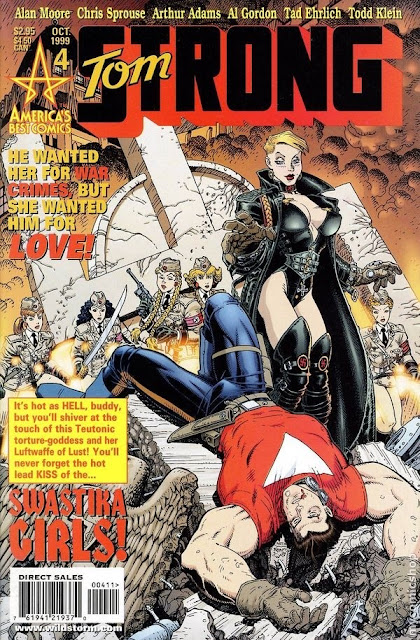 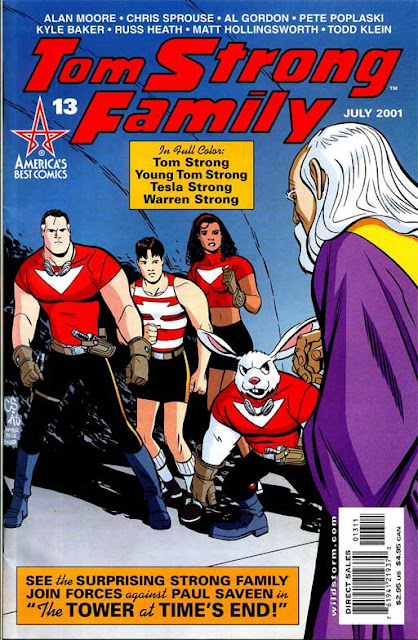 "Tom Strong" is also a Captain Marvel ripoff, which is why he has the red shirt and has a sort of bland-looking face, and even has a "Marvel Bunny" with him. But Captain Marvel comics were not hateful. They were supposed to be innocent kid's comics. Nothing like what was done in Tom Strong, where they had the black woman beat up the white woman. Which evidently is something from a blaxploitation film. And it's a depiction of violence against women, which is a recurring problem in comic books. These comic books are usually the work of men, so it can be considered discriminatory, sexist and anti-female.

Blondes were very popular in the movies during the prewar period. And thirties blonde Betty Grable went on to become the top pin-up girl of the war. Heaping abuse on a blonde character who's supposed to be in that period makes it look as if someone thought they were getting even with Hollywood glamour girls. Or possibly with women in general, since that was who the movie idols represented. 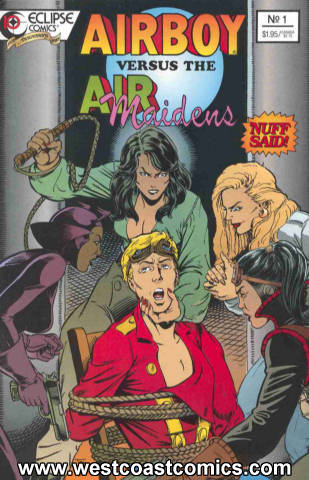 Airboy had adventures with a nazi villianess called "The Valkyrie" who had a gang of "Airmaidens". But the Valkyrie wasn't blonde. She was a brunette.

There were brunette nazis in real life, too. Hitler, for example. 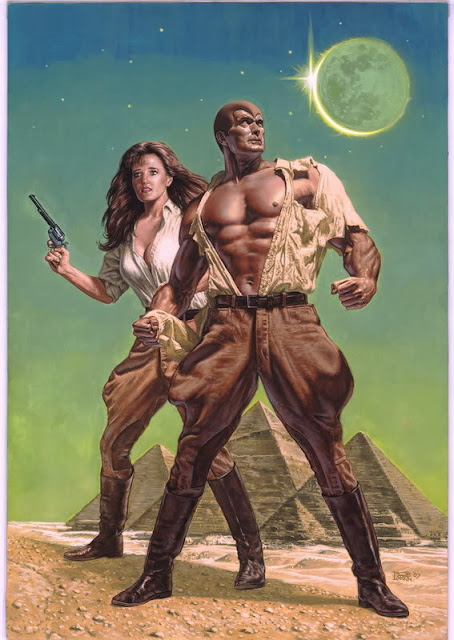 The main girl character in Doc Savage adventures was his cousin, Pat Savage. Pat Savage was supposed to have "bronze" hair, but I suppose that could be some shade of blonde.

To me, it looks like the "bad blonde" in Tom Strong is amoung other things, a slap at Pat Savage. But there's more. 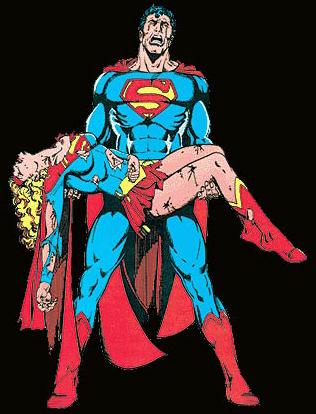 DC comics killed Supergirl, who of course is Superman's cousin, and occupies about the same position with Superman that Pat Savage occupied with Doc Savage. Of course, they did bring Supergirl back again eventually. But it begins to look like part of a pattern after a while.

DC comics also said Batgirl had been beaten up so severly that she was crippled and confined to a wheelchair. At least, until they decided to bring her back the way she was in the first place. 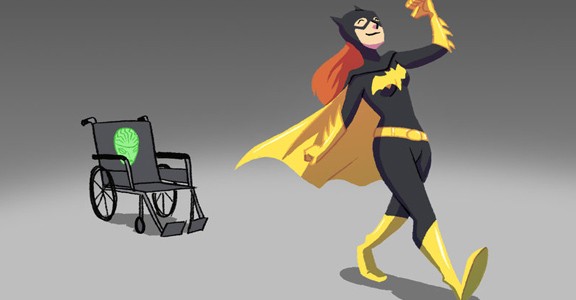 At least this story has a happy ending.