Dale thought that "Sherry Flippe" in this 1944 story might be Paulette Goddard. 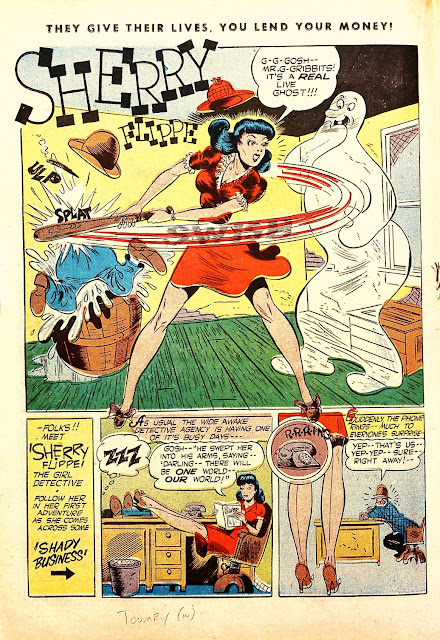 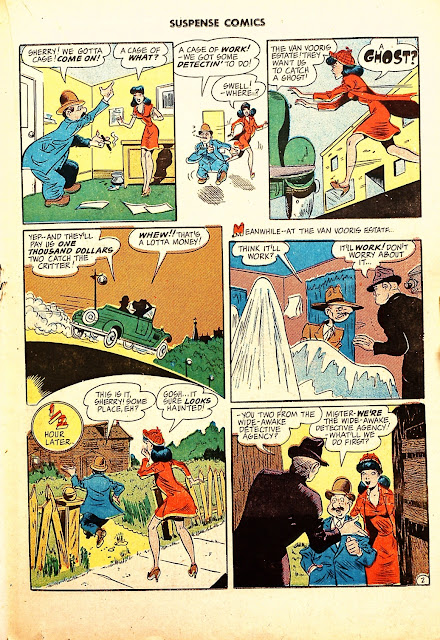 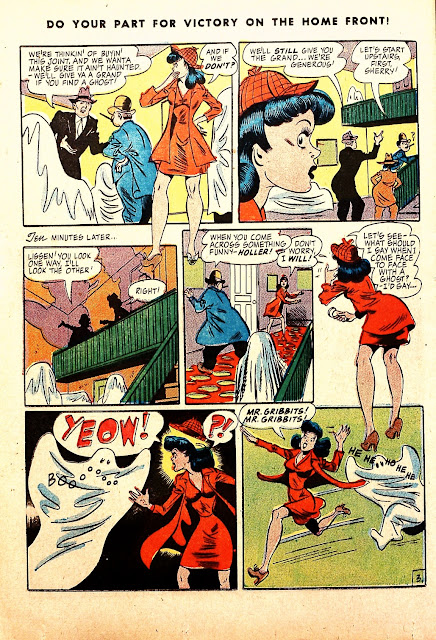 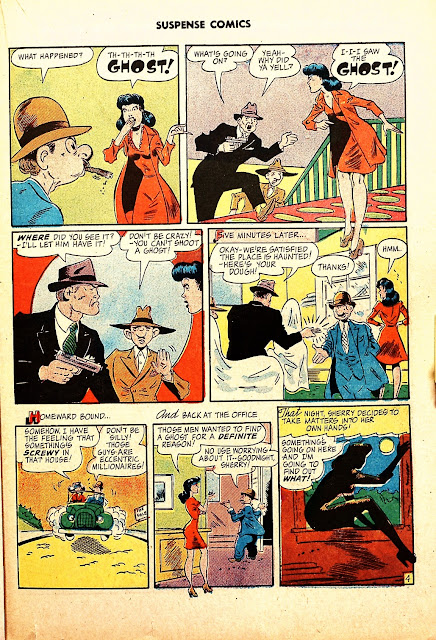 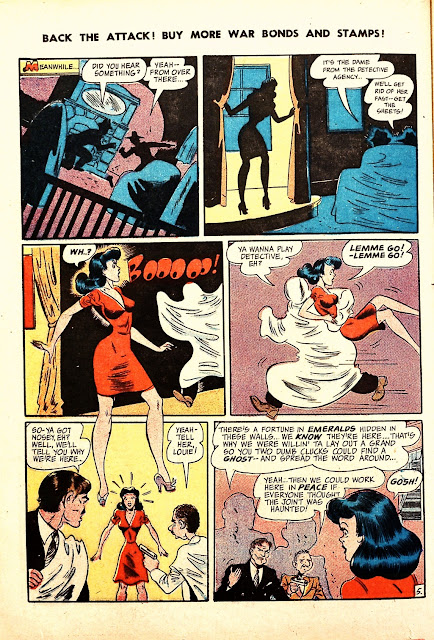 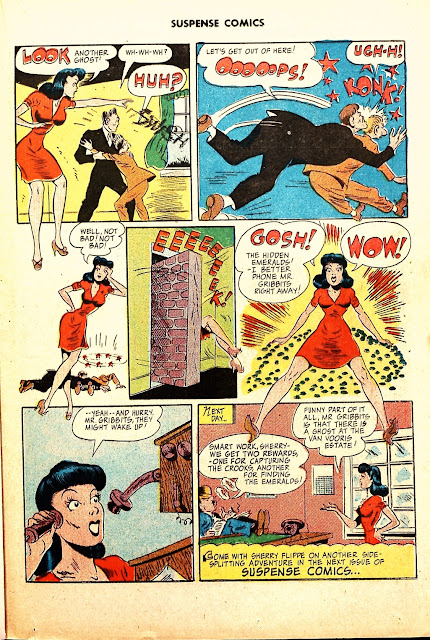 This story was originally published in 1944. And in 1940, Paulette Goddard had made a movie called THE GHOST BREAKERS.

The Ghost Breakers (1940) is a comedy film directed by George Marshall and starring Bob Hope and Paulette Goddard. The movie was adapted by Walter DeLeon from the play The Ghost Breaker by Paul Dickey and Charles W. Goddard, no relation to Paulette.[1][2]
Along with Abbott and Costello Meet Frankenstein and Hope's own The Cat and the Canary, it is cited as a prime example of the classic Hollywood horror-comedy.[2][3] The film opens in a Manhattan radio studio during a broadcast by crime reporter Lawrence Lawrence (Bob Hope)—"Larry" to his friends, as well as his enemies, who are many in number among the local underworld.
Listening in on the broadcast is pretty brunette Mary Carter (Paulette Goddard), whose high-rise hotel room goes dark as a violent thunderstorm causes a city-wide blackout. In the near darkness, a knock comes at her door. It is Mr. Parada (Paul Lukas), a suave, vaguely sinister Cuban solicitor. He delivers the deed to her inherited plantation and mansion, "Castillo Maldito," on a small island off the coast of Cuba. Despite Parada's discouragement, she impulsively decides to travel to Cuba by ship to inspect her new property.
During Parada's visit, Mary receives a telephone call from Mr. Mederes (Anthony Quinn), an even more sinister gent who warns Mary not to sell the newly inherited property to Parada. Mary agrees to meet Mederes later.
Meanwhile, after Larry Lawrence has finished broadcasting the evening's exposé of a local crime boss, he receives a telephone call from the crime boss, Frenchy Duval (Paul Fix). Frenchy invites Larry to his hotel to discuss the broadcast so he can "give it" to him straight.
Coincidentally, Frenchy is living in the same hotel where Mary Carter lives. Mederes arrives on the same hotel floor as Larry. However, Mederes is looking for Parada. Mederes confronts Parada and Parada shoots and kills him. Larry hears the shot and fires his gun at random. In a mix-up in the still-darkened building, Larry sees the body and believes he's killed one of Duval's henchmen. In the confusion he finds himself in the rooms of Mary Carter, who is already busy packing for her journey. Believing that he is being pursued by Duval's men, Larry hides in Mary's large open trunk. Unaware of Larry's presence, Mary locks the trunk and arranges for its transport to the harbor.
Later at the dock, Larry's valet Alex (Willie Best) searches among the luggage bound for loading and finds Larry among them. Although not in time to prevent the trunk's transfer to the ship's hold, Alex manages to get on board, hoping to extricate his employer before the ship sails.
Once in her stateroom, Mary is surprised to unpack Larry along with the rest of her belongings. Larry and Alex decide to remain on board, partly to act as bodyguards to the plucky beauty, but also to keep out of reach of Frenchy Duval and the police.
As Larry and Mary strike up a flirtation, they run into an acquaintance of Mary's, Geoff Montgomery (Richard Carlson), a young professorial type who regales them with tales of the local superstitions of their destination, particularly voodoo, ghosts and zombies.
Upon reaching port in Havana, Mary, Larry, Alex go to the island. En route they find a shack occupied by an old woman (Virginia Brissac) and her catatonic son (Noble Johnson), whom they believe is a zombie. The imposing plantation manor proves to be a spooky edifice indeed. They begin to explore the long-abandoned, cobweb-ridden mansion, and discover a large portrait of a woman who is nearly an exact likeness of Mary—most certainly an ancestor.
Soon they are terrorized by the appearance of a ghost, and the reappearance of the zombie. Are these real, or are they a ruse to frighten Mary away from her inheritance?

The Dickey and Goddard play The Ghost Breaker was filmed twice previously by Paramount, first in 1914 by Cecil B. DeMille, with stars H. B. Warner and Rita Stanwood. It was filmed again in 1922 by director Alfred E. Green, starring Wallace Reid and Lila Lee.[2] Both these silent film versions are now considered to be lost films.[4]
George Marshall, director of the 1940 version, remade The Ghost Breakers as Scared Stiff (1953), featuring Martin and Lewis (Dean Martin and Jerry Lewis). The remake featured cameos not only from Hope, but also from Bing Crosby. A year before Scared Stiff, Martin and Lewis appeared in the Crosby/Hope film Road to Bali.
The film was adapted for radio on Screen Directors Playhouse on April 4, 1949 with Bob Hope re-creating his film role and Shirley Mitchell as Mary. Hope appeared again on the program for an hour-long version on June 14, 1951.

The Ghost Breakers was a sequel of sorts to Paramount's 1939 hit The Cat and the Canary, also starring Bob Hope and Paulette Goddard. Paramount teamed the pair again, along with costar Willie Best, in Nothing But the Truth (1941).[2]
Cinematographer Charles Lang would go on to earn an Academy Award nomination for his work on another spook-filled Paramount release, The Uninvited (1944).
The Ghost Breakers, along with The Cat and the Canary, was an inspiration to Walt Disney for his Haunted Mansion attraction at Disneyland.[5]
Robert Ryan appears as an ambulance driver in the opening of the film. 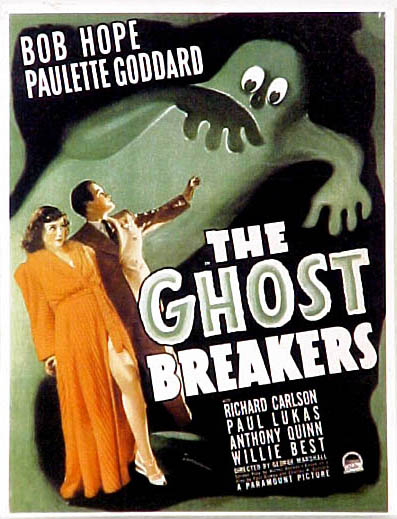 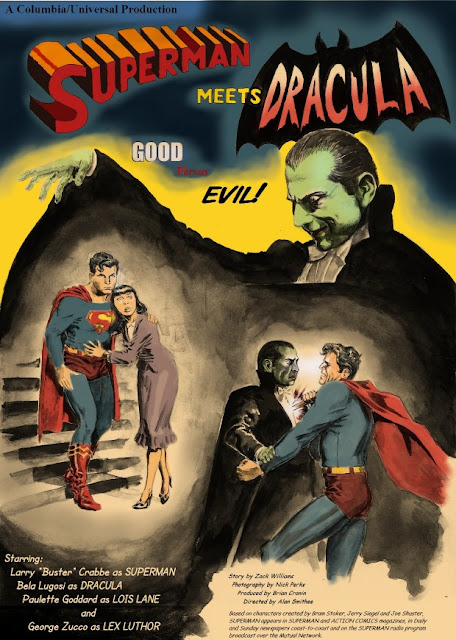 Somehow, I think I prefer Noel Neill ( who I have written about recently on my other blog ). It might be difficult for me to accept anybody else in that part.