Regular coverage of this story stopped in January 1936, but occasionally there would be more news items after that.

The sudden death of John Gilbert drew attention from the case of Thelma Todd, but coverage of that story would have ended in any case, as did the investigation itself.

An article that originaly appeared in the LA Times January 26, 1936. 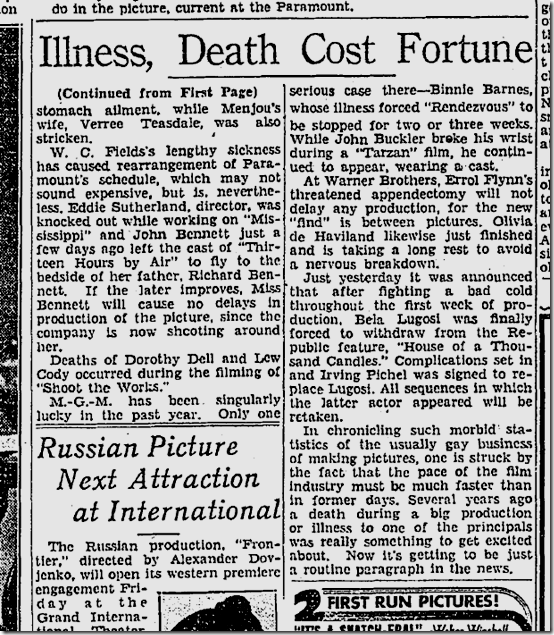 Thelma Todd's part was largely eliminated from THE BOHEMIAN GIRL because Stan Laurel was afraid that adverse publicity would hurt the picture.

Although there was no proof that Thelma Todd had been murdered, there likewise had been no proof of suicide. Some people complained about the way the authorities had handled the case. Sometimes they would point to this particular incident. It is mentioned in a number of books about Hollywood's Unsolved Mysteries.

After selling Thelma Todd's posessions, Mrs. Alice Todd went back to live in Massachusetts, where she would live for the rest of her days.

Posted by Benny Drinnon at 3:13 PM No comments:

The investigation drags on, the news reports drag on, but somehow they never seem to get anywhere.


Bruno Hauptman was in the news at the time.


Posted by Benny Drinnon at 1:52 PM No comments:

The investigation continues and so does the news coverage. But will it ever lead anywhere?

Busby Berkely was in bad traffic accident not long before Thelma Todd died, and his wreck doesn't seem to have been all that far away from the Sidewalk Cafe. Here we see stories pertaining to the two tragedies run side by side.
December 24, 1935 at lower magnification.


Sid Grauman had the Chinese theater where movie stars left their footprints in the cement. The others were all involved in Thelma Todd's Sidewalk Cafe. Rudy Schafer's son was the source of some of the information in Donati's book on Thelma Todd.
Thelma Todd's height had previously been stated to be five feet four inches, but this article gives a height of five feet three inches.

Czechoslavakia's invasion by Germany ( beginning in 1938 ) was another step that led to the second World War.


Rudy Schafer ( who had the same name as his father, pictured in an above article ) told us details of  gambling that was going on at the Sidewalk Cafe. These details were not made public at the time.
December 26, 1935

Posted by Benny Drinnon at 2:31 PM No comments:

The Other Thelma Todd

Thelma Todd had a niece named after her, so there was another Thelma Todd. 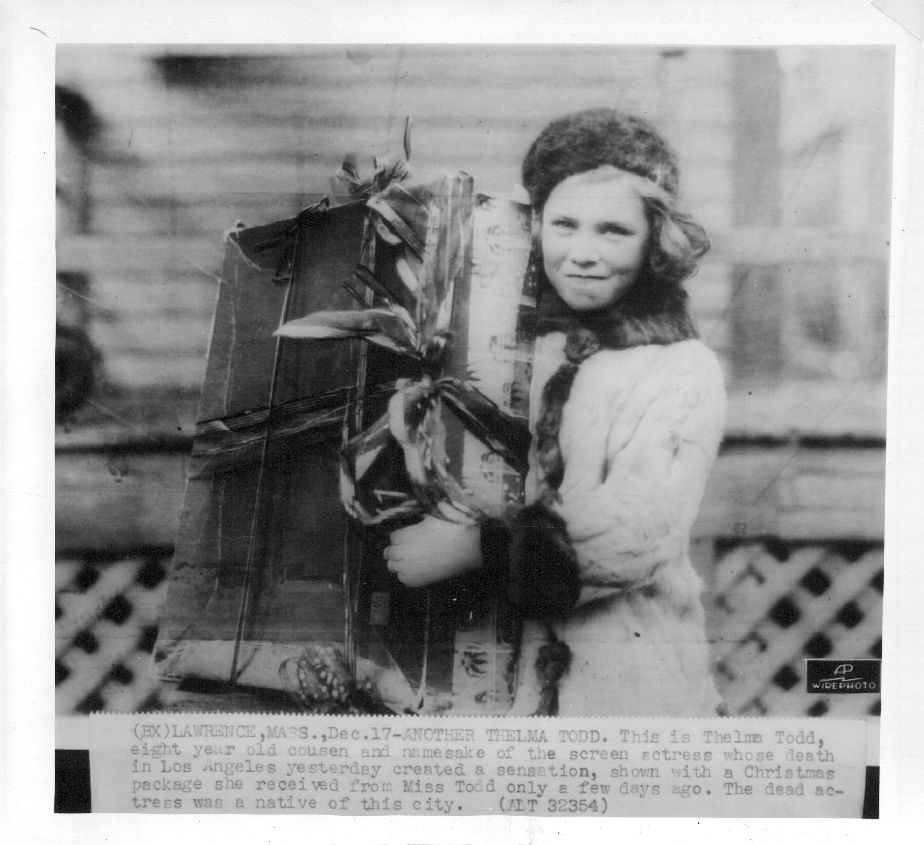 Thelma Todd had bought a lot of Christmas presents shortly before her death, this picture shows one of the recipients with one of them. Some other people recieved their presents after her death.

A sad development for her loved ones at any rate, particularly for little children, for whom the holliday was supposed to be a time of happiness.
Posted by Benny Drinnon at 6:57 AM No comments:

This issue announced the death of Thelma Todd. 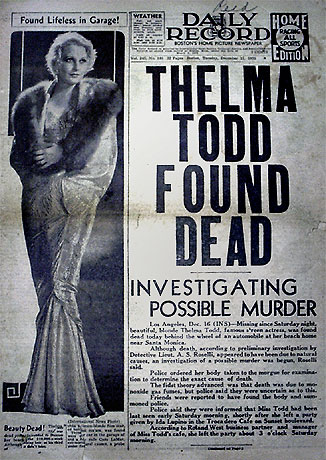 Reblogged from http://www.thefedoralounge.com/showthread.php?31537-On-This-Day-In-History..../page16
Posted by Benny Drinnon at 6:43 AM No comments:

The story unfolds further, but the outcome remains uncertain as the investigation continues.


Roland West, Mrs. Alice Todd, and May Whitehead - better copy of photo in next article.


Showing the Thelma Todd articles on this page at lower magnification to get them all in. 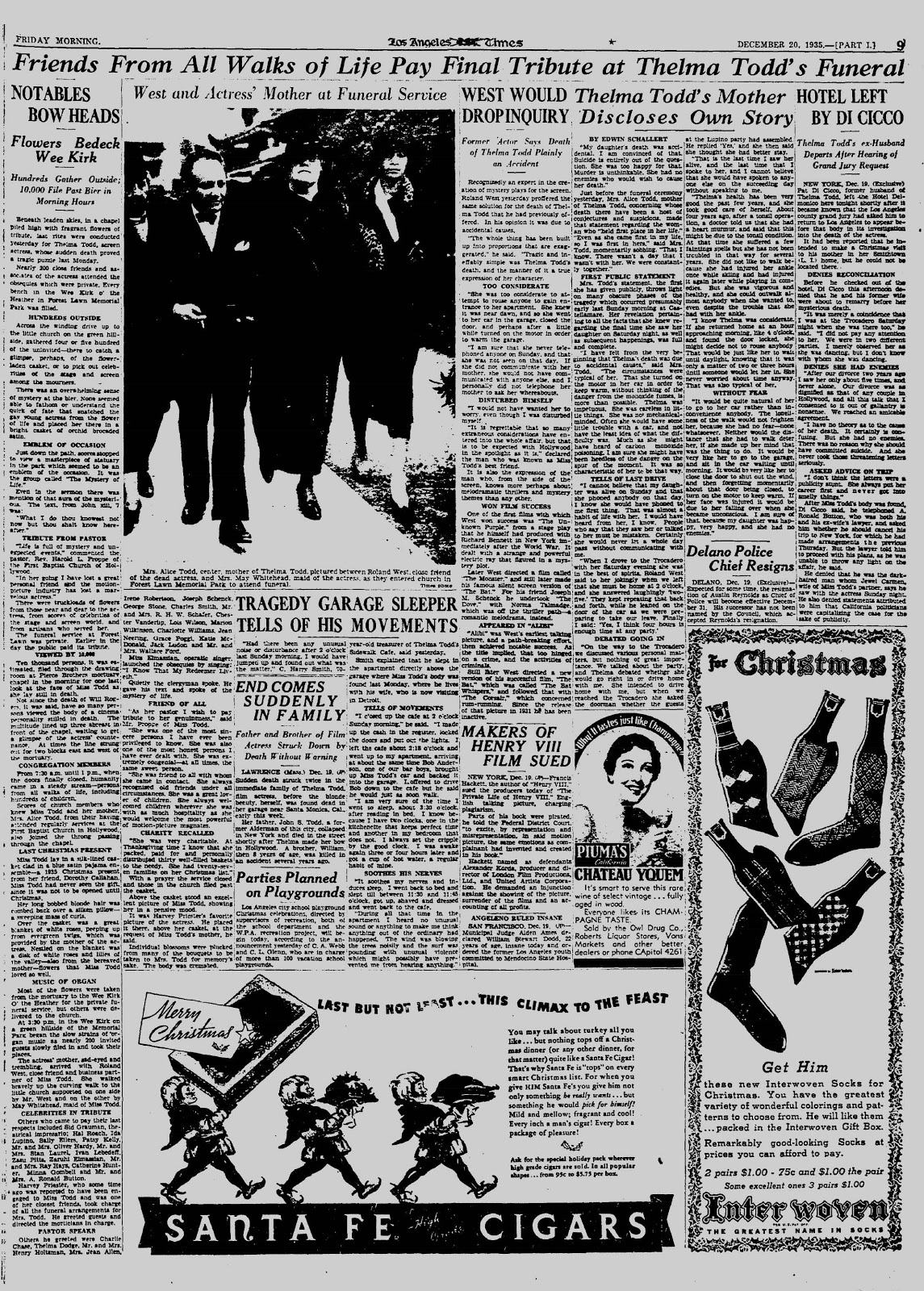 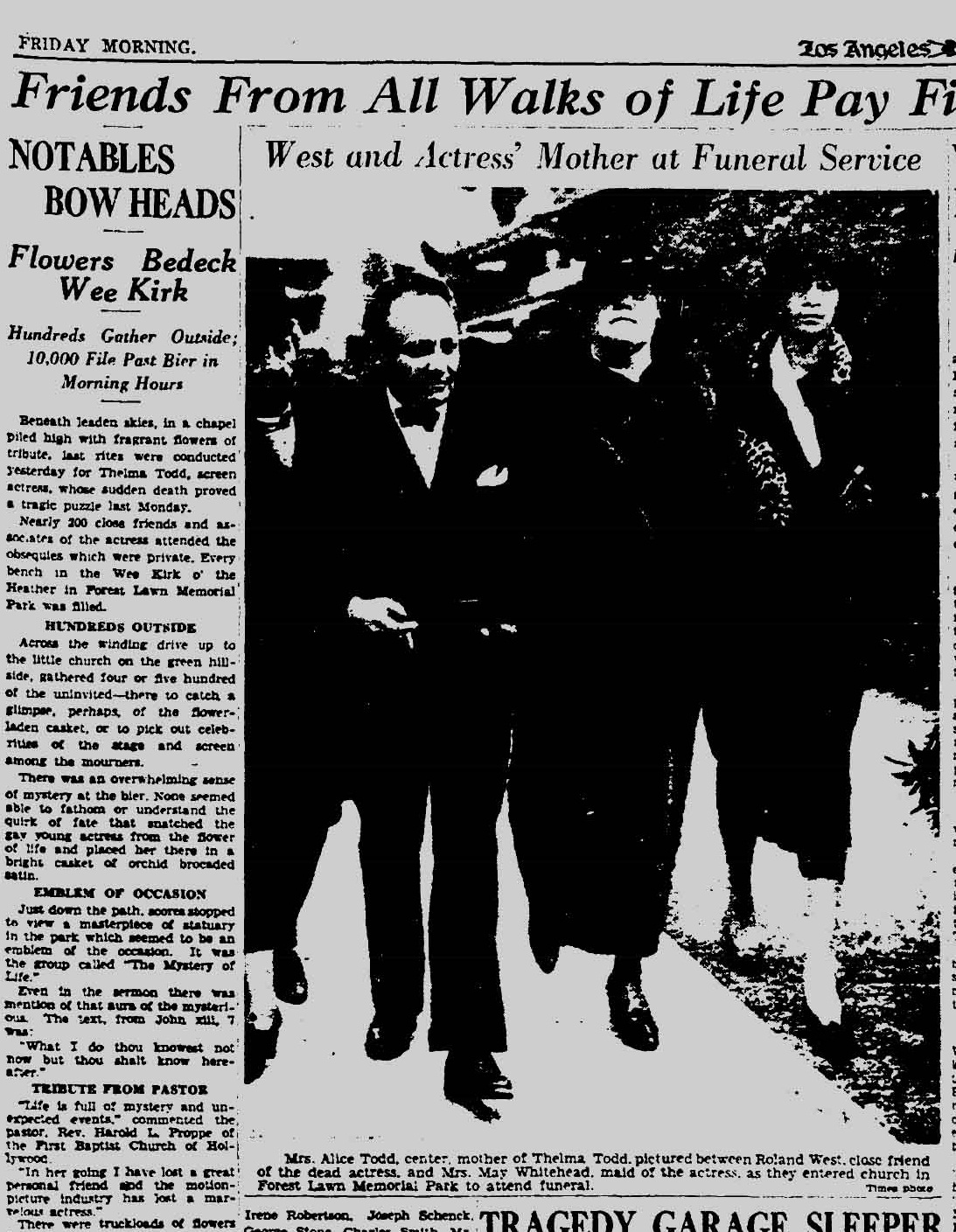 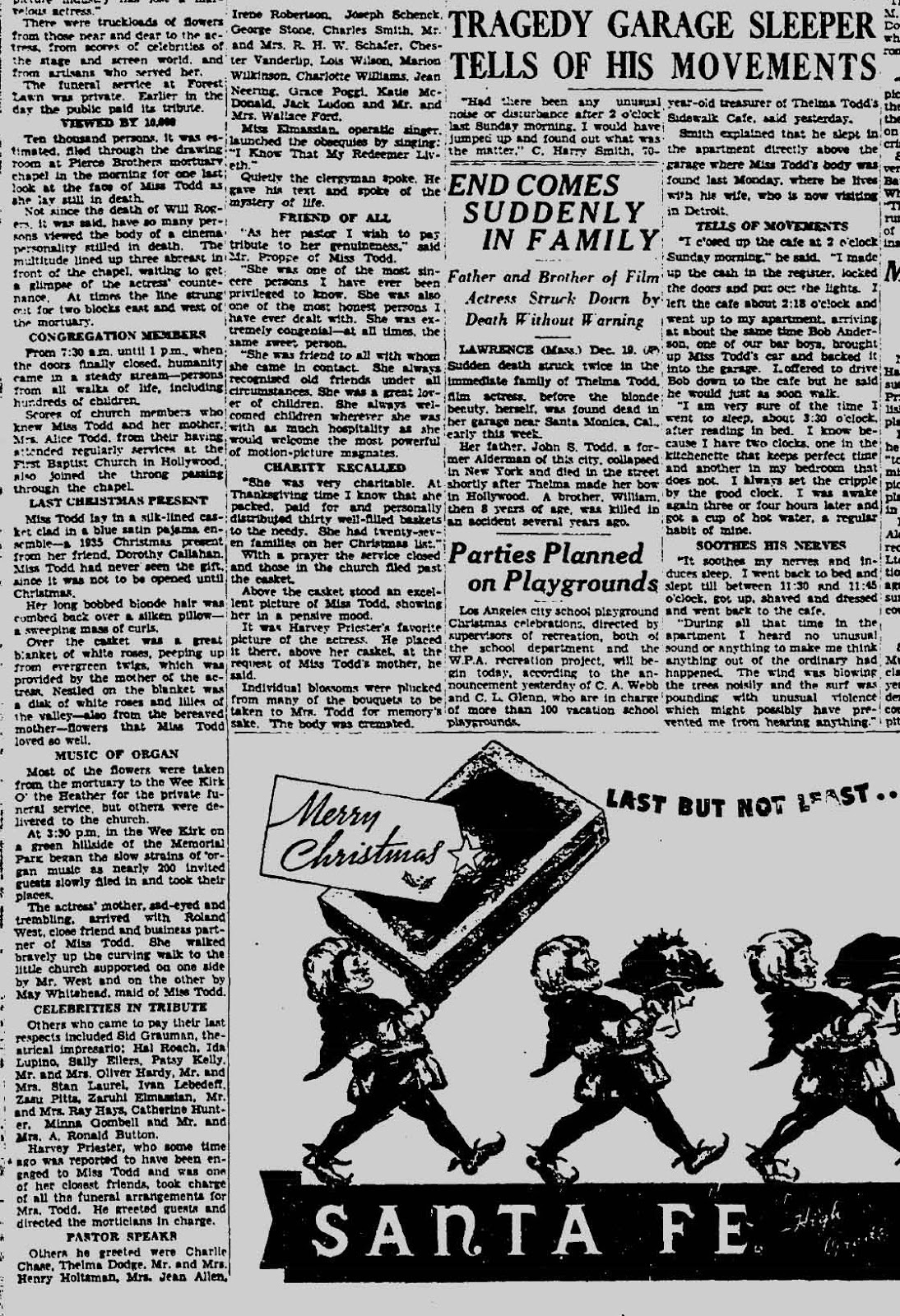 Section from the right shown at increased magnification. 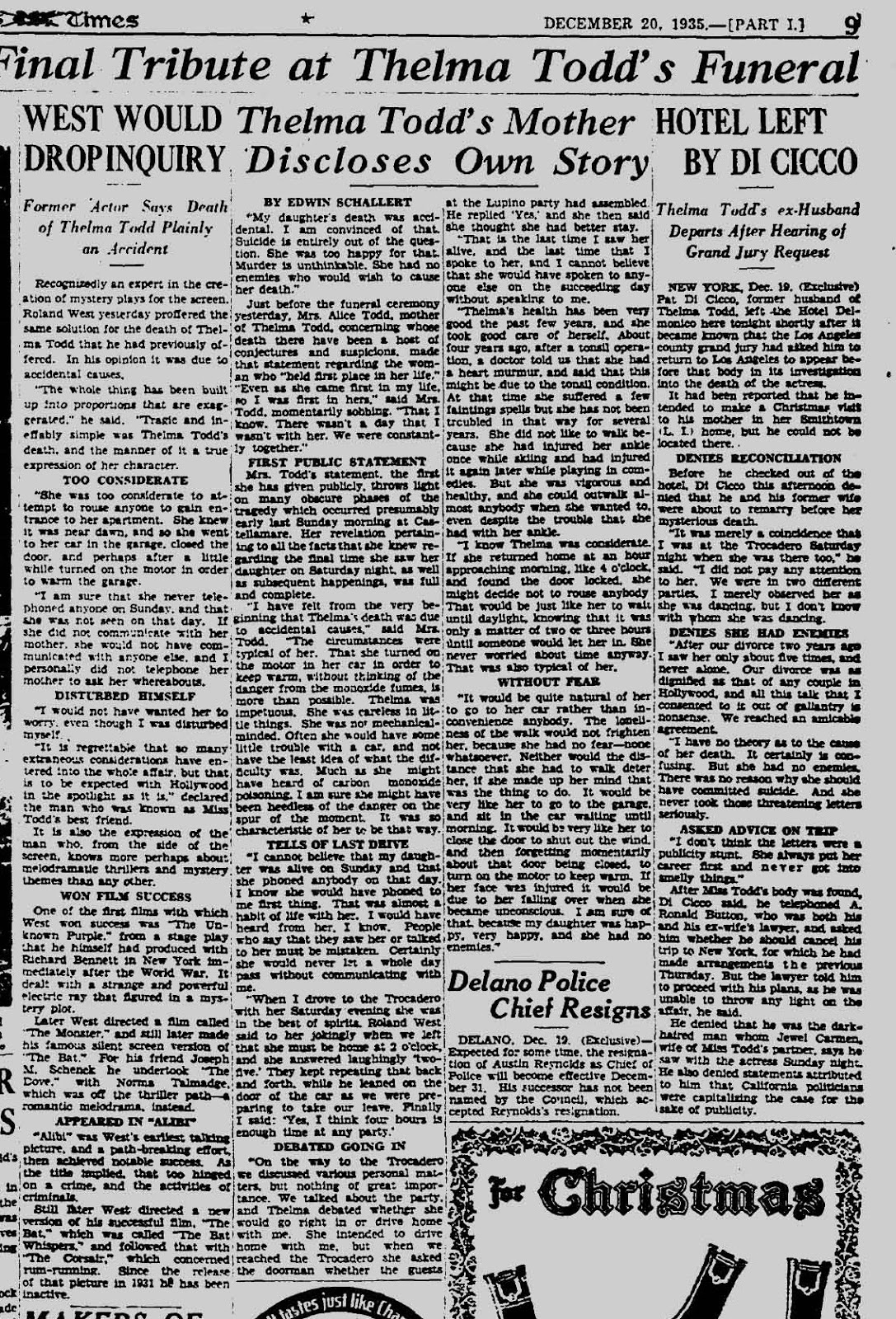 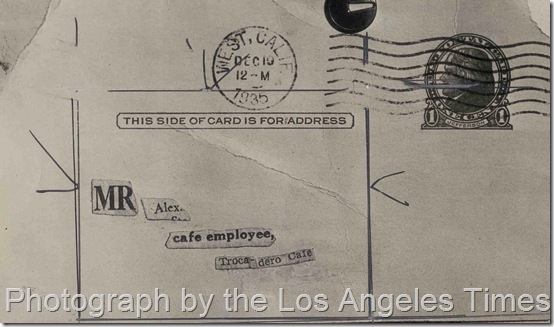 Threat to waiter Alex Hounie, made up of words cut from newspapers or magazines. 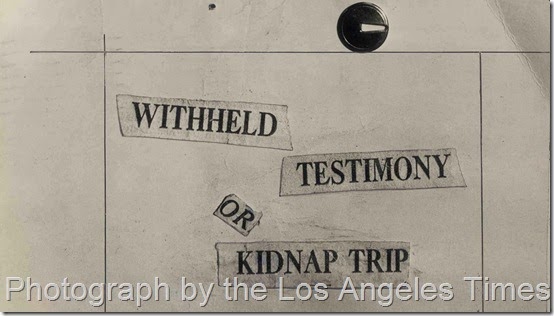 The items on the lower left of this section refer to Mussolini's war against Ethiopia. This was one of the actions that eventually led to the second World War.
Mussolini afterwards wanted Hal Roach to come to Italy to make movies and Rosina Lawrence would go to Italy to make one film. The rest of the movie industry had some complaints about the idea of Roach being associated with Mussolini, an Axis partner of Germany's Hitler.
Posted by Benny Drinnon at 3:26 PM No comments: