Darla Hood and Pete the Pup. 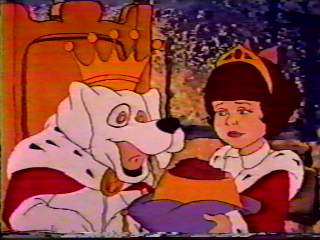 A
Posted by Benny Drinnon at 2:15 PM No comments:

Birthday Of Pete The Pup 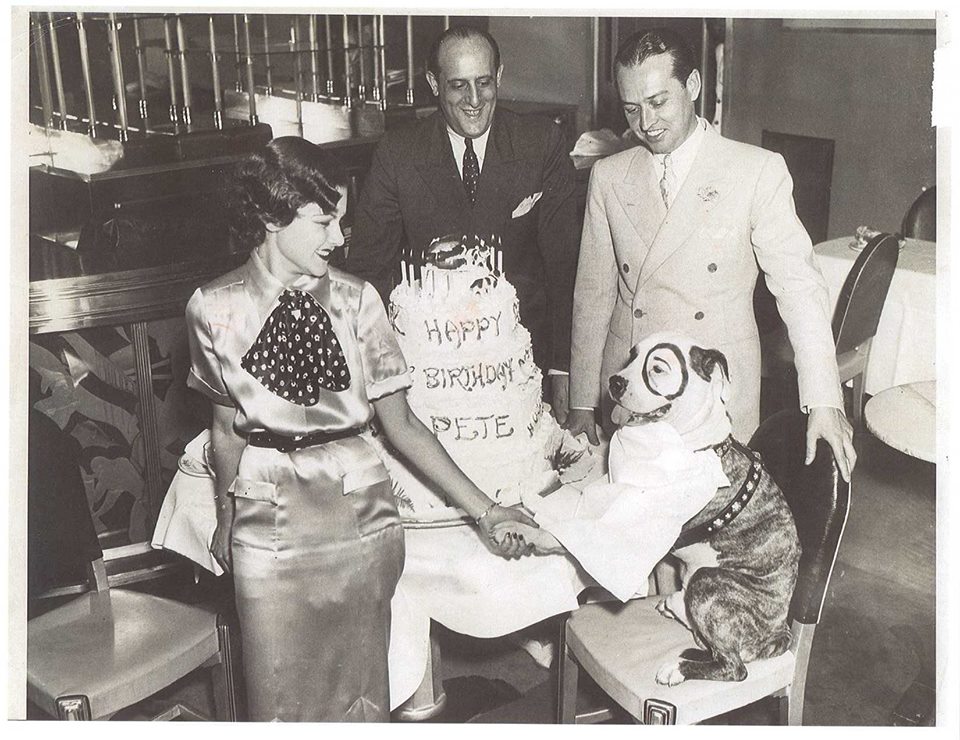 A
Posted by Benny Drinnon at 2:14 PM No comments:

THE BIG SHOW With Our Gang And Pete The Pup 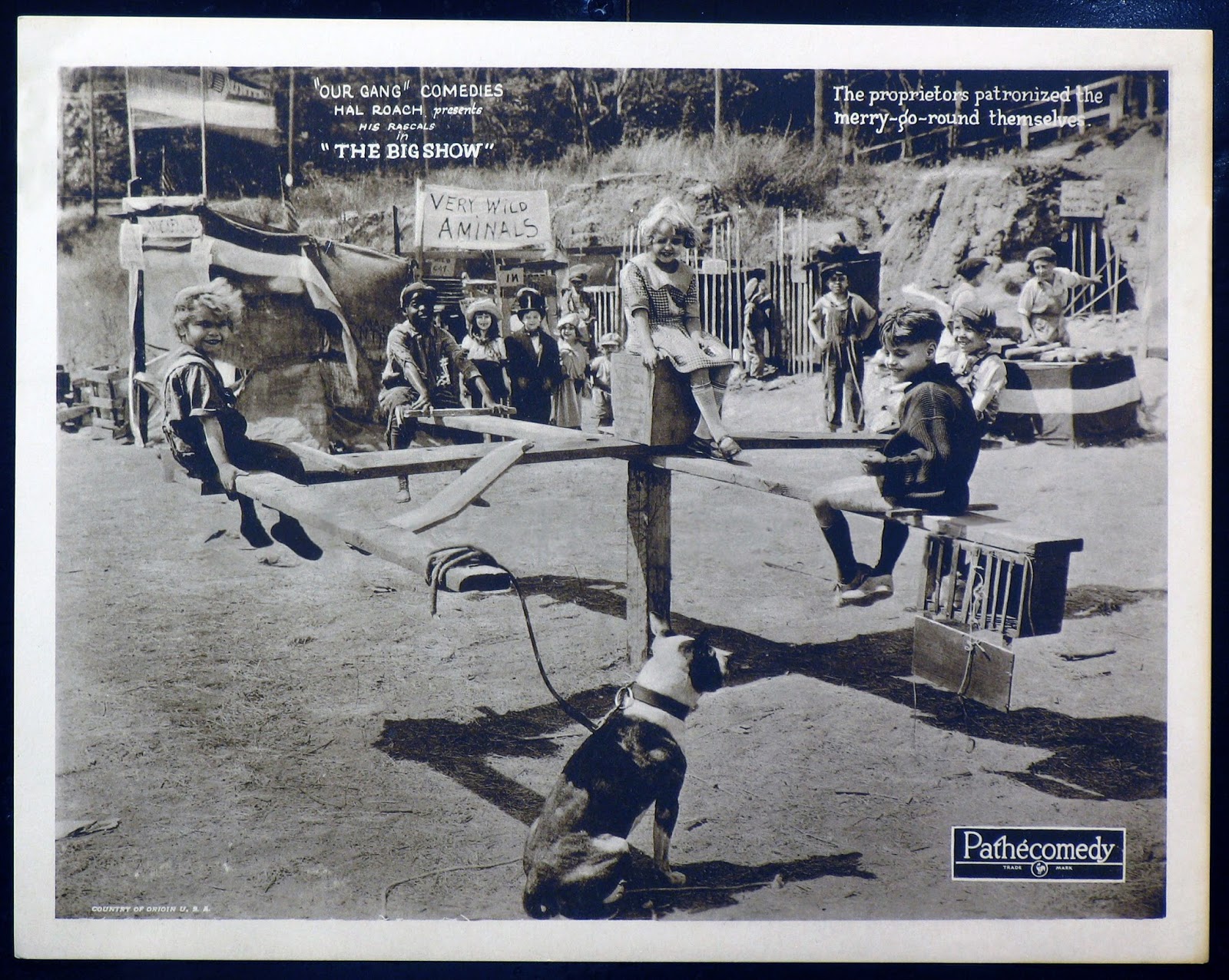 A
Posted by Benny Drinnon at 2:14 PM No comments:

Our Gang At The Beach With Pete The Pup

Pete the Pup was more important in the older films. 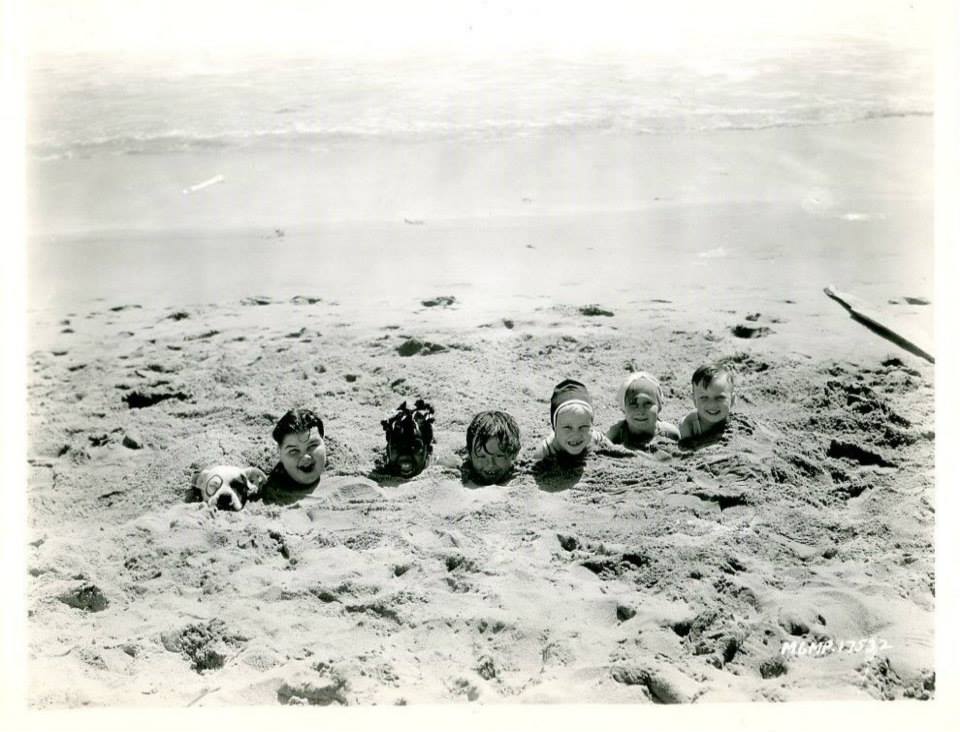 A
Posted by Benny Drinnon at 2:13 PM No comments:


On the set of "Wrong Again" with the Our Gang kids (and Pete). 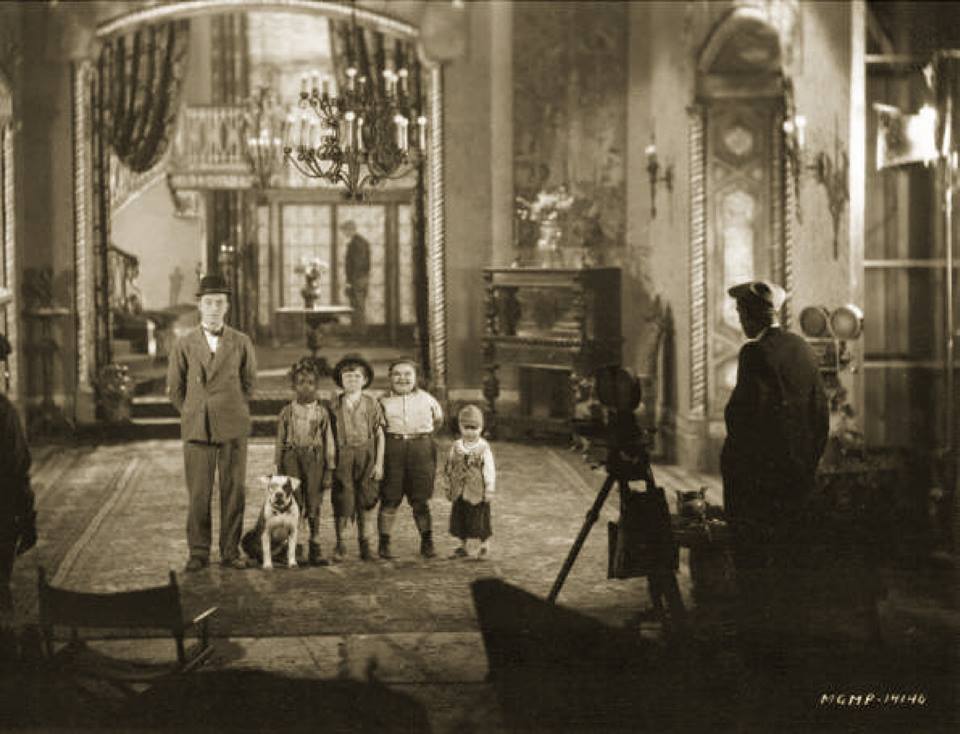 A
Posted by Benny Drinnon at 2:13 PM No comments:

Thelma Todd And Pete The Pup 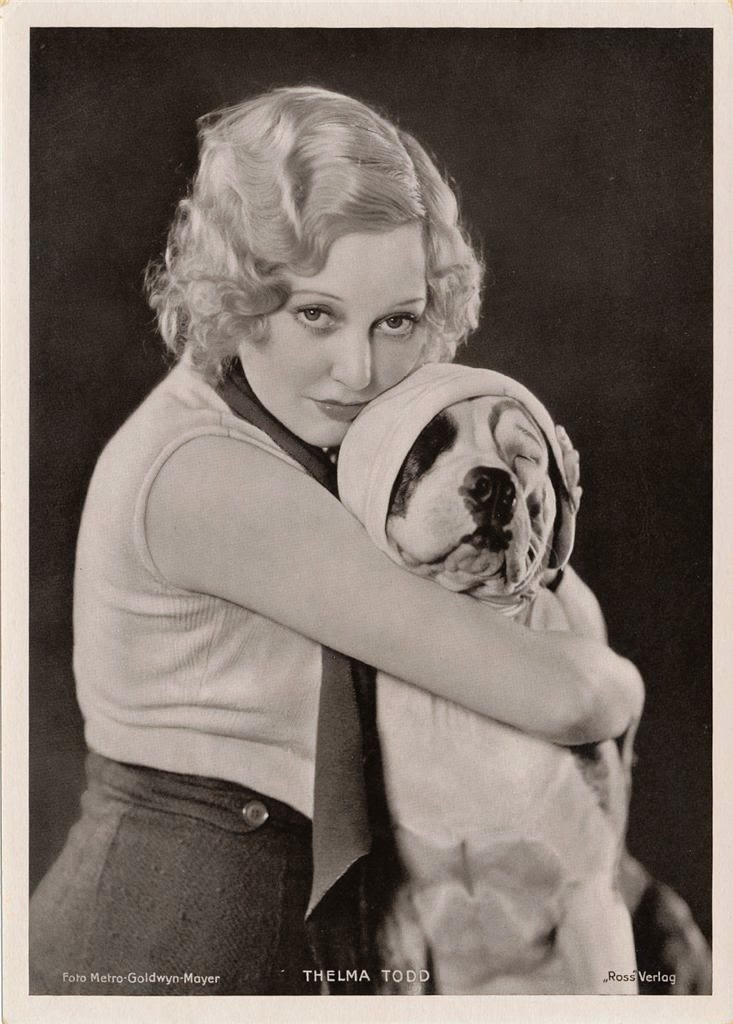 The story was that this poor doggie was suffering from kleig eye and the kind-hearted Thelma was trying to comfort him. Lucky dog. 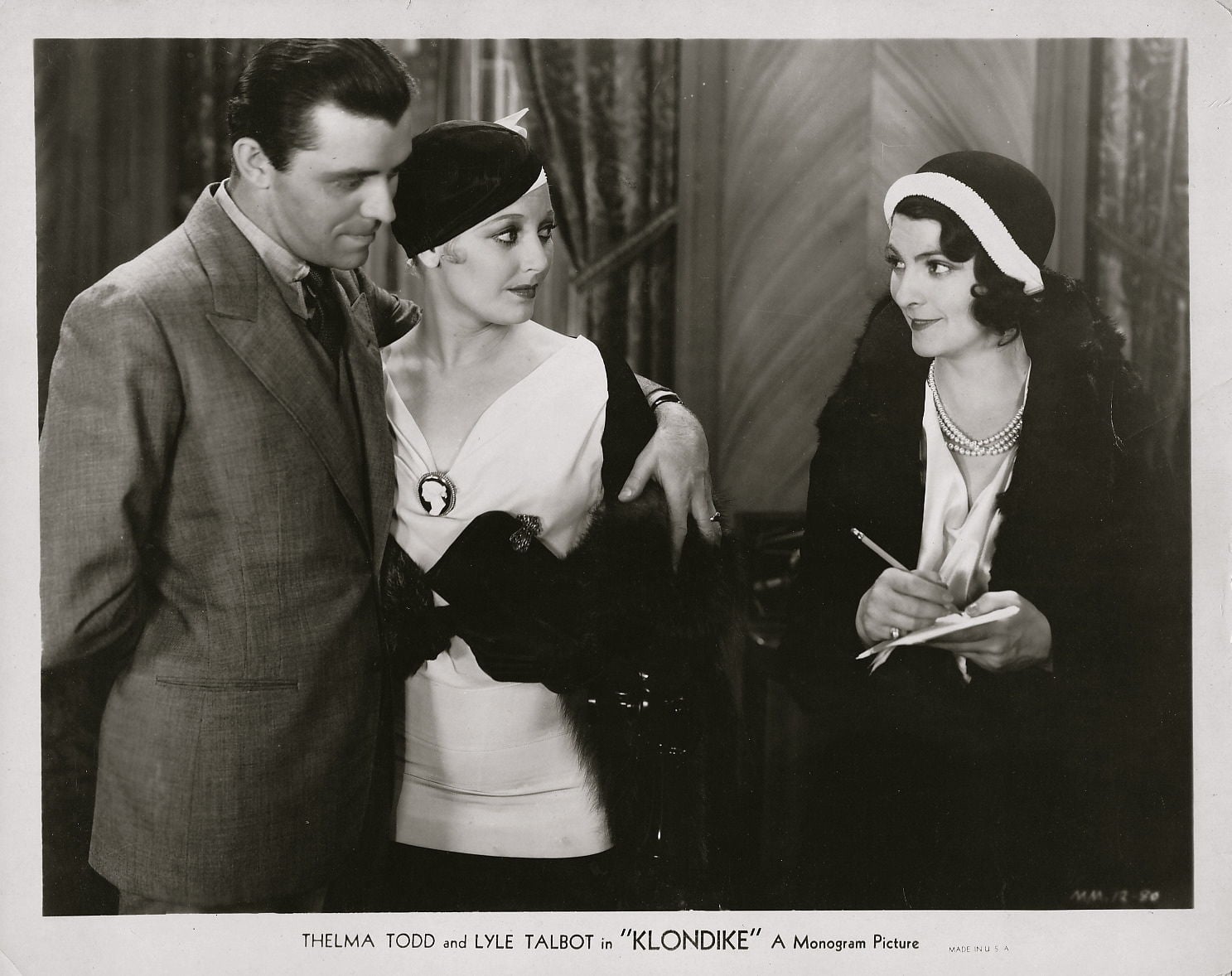 Posted by Benny Drinnon at 10:15 AM No comments:

Candid photo of Thelma Todd leaving the Trocadero Cafe. Marked "From the collection of Richard W. Bann", who is an authority on the Hal Roach Studio. 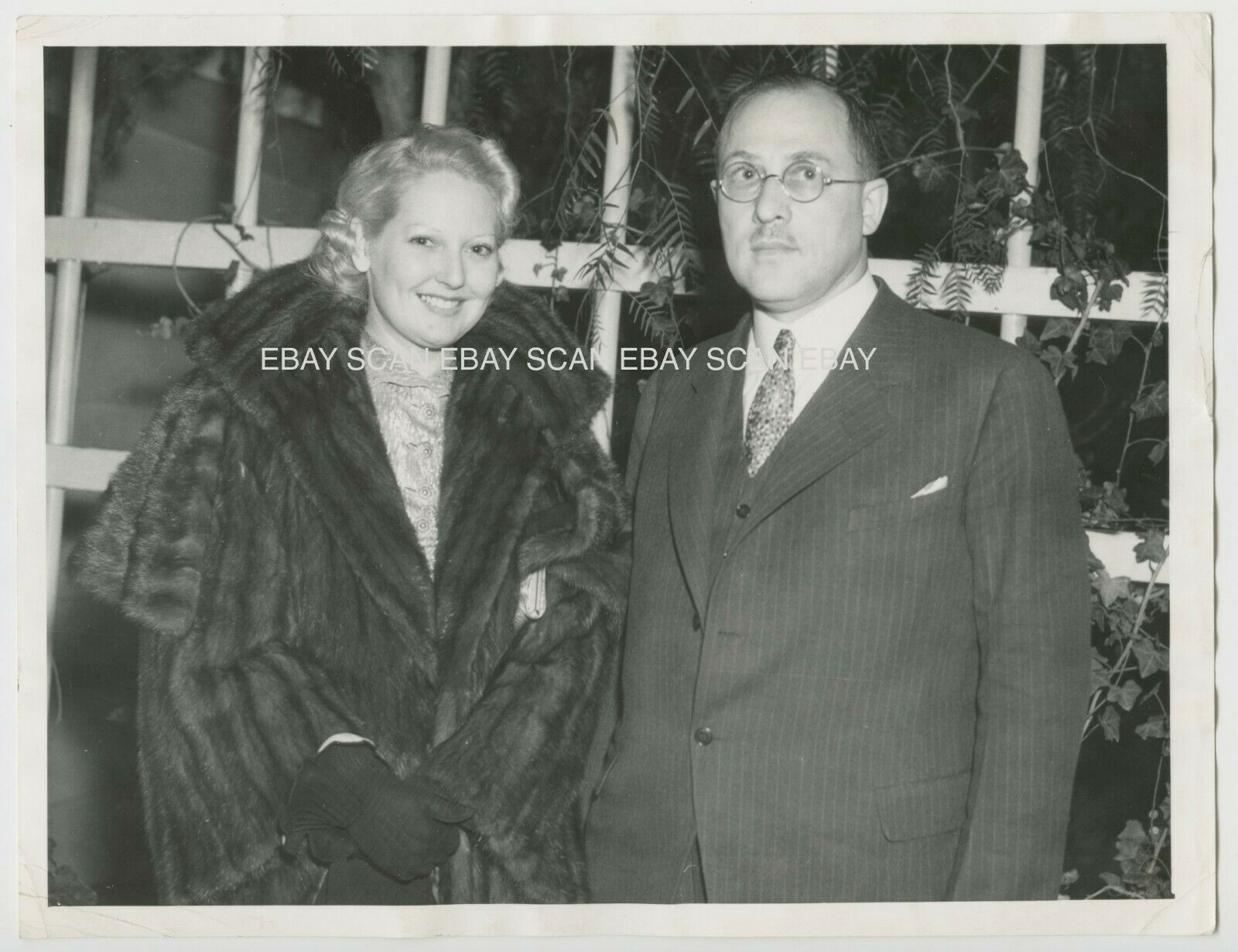 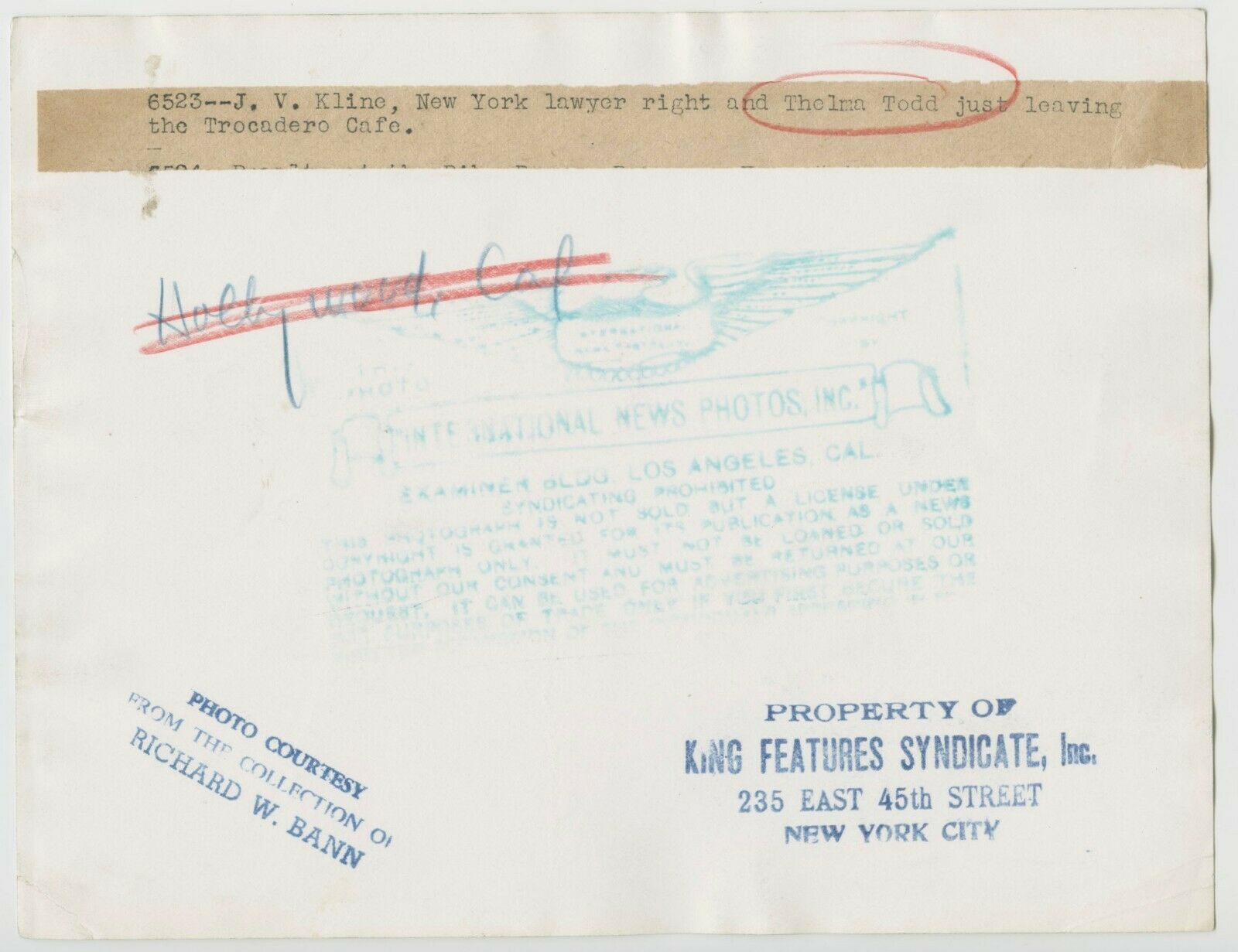 Posted by Benny Drinnon at 10:24 AM No comments:

Posted by Benny Drinnon at 11:24 AM No comments:

On July 29, 1906, Thelma Todd was born in Lawrence, Massachusetts. Shewould become one of the American screen's most scintillating, beautifulstars. A master of slapstick comedy in which her natural poise andelegance was hilariously counterpointed to the frenetic action, sheremains totally unique in her timeless appeal. In commemoration of hercentennial, I am posting a special "News Notes From Movieland" series.The first part consists of Thelma's own views on acting and her careeras she expressed it in interviews of the period.

NEWS NOTES FROM MOVIELAND (Tribute to a Lovely Lady--Part 1)Thelma Todd in Her Own WordsCompiled by William M. Drew

On working with comedians: "The woman who works with such comedians asthe Marx Brothers must take all situations seriously. No matter whathappens, her characterization does not permit her to laugh. The Marxesoften insert comedy we haven't rehearsed, which is one of the reasonsfor their success. I've had to train myself not to see anything funnyin these spontaneous bits, but I have spoiled many a scene by failingto suppress my sense of humor. The Marxes, moreover, know my weakness,and on the set make it a rule to do everything possible to make melaugh in the wrong places. I've almost bitten off my tongue onnumerous occasions in order to keep a straight face." (From "TheCharleston Gazette," July 31, 1932)

On beauty and acting: "I never heard of a beauty contest winner gettingvery far in any other line. I didn't crash the movie gate by way of acontest, because I was already under contract when I won my title. Thefact that I was Miss Massachusetts had nothing to do with it."Building on beauty seems to me the worst thing any girl can do. Ilike real people who are sincerely what they appear to me, and since Iam not unique, I believe that most people rate sincerity above looks."Did you ever see an emotional scene that really moved you whereinthe actress remained beautiful? No, and neither did I. People aren'tbeautiful under the stress of terror or grief or pain. Such scenesonly get over when the actress forgets how she looks and simply feelsthe emotion and so reflects it."When I first went into pictures, during the old, silent days, mypart called for me to cry. My father, whom I had idolized, had diedand left me to face the world alone."'Have you ever done a crying scene?'" my director asked me."I never had, and I hadn't wept over my own woes for several yearsbefore that."'You'd better go off by yourself and work it up,'" he advised."While I was sitting in a corner of the stage, thinking about theutter desolation of the girl I was to portray, the star of the picturecame up to me."'Haven't you ever had a little puppy dog who died, or a kitten whowas killed, or even a relative you loved very much who was taken away?'he inquired."'I don't know--what's that got to do with it?'" I returned."'Why, you think of that loss and presently you feel like crying,'he explained."I stared at him. I thought, 'I don't belong in the business ifthat's the way you cry!' So I said, 'What's the matter with believingin what you are doing? If I believe in the girl, I ought to be able tocry over her grief, not drag in a puppy dog.'"I went into the room and cried steadily from 10 in the morninguntil 6:30 that night, when I was so exhausted with emotion that I hadto be helped out of the studio." (From "Why Beauty Contest Winners areFailures," interview with Thelma Todd by Alice L. Tildesley, "TheOakland Tribune," November 1, 1931)

On sincerity and speech: "Sincerity shows in voices even more than itdoes in looks. I'm fortunate in coming from a part of the countrywhere women's voices are usually low pitched and rather sweet, andwhere we naturally use good diction. I've never had a voice lesson inmy life and have no intention of taking any. But I watch my voice morecarefully than I watch my facial expression."People used to say that truth could be seen in a person's eyes, butI know that I could look anyone in the face and tell the biggest kindof a lie without a blink. It's the voice that betrays you.Spontaneous sincerity is the necessary thing." (From "Why BeautyContest Winners are Failures")

On personality, hair color and independence: "I think I must have abrunette personality. I always think of blondes as soft and pliable,ready to cling to the nearest male for support and protection, justwanting to be taken care of and very sweet and easy to deal withbecause they are so amiable. None of which qualities belong to me."I am a fighter. I have made my way alone and can stand up formyself. I think I am the sort of person who can take a great deal fromone I care for and forget it, but there is a limit; beyond that, andit's all over. You see, I'm not a real blonde inside or I'd besteadfast under any circumstances. No brunette was ever a doormat."Anita Loos is to blame for all the fair heads you see bobbingabout. She said that gentlemen preferred blondes and girls took herseriously."It's silly, but it's true that complexions and hair follow thecurrent fashion. In earlier days all our vamps were raven-tressed:Theda Bara, Barbara La Marr, Nita Naldi. The little girls with goldencurls were all so sweet and good."Then along came the redheads. Clara Bow, Margaret Livingston andAlice White, among others. You thought of red-headed women asskyrockets. They were incalculable and therefore interesting."They even made Greta Garbo a redhead in her first picture. Whichwas a crime. Her personality is anything but red-headed."Then they got tired of flaming hair. Alice White became blondeand so did Margaret Livingston, let alone Bebe Daniels, Joan Crawford,and now even Clara Bow."The blonde hussy and the blonde heroine are reigning side byside--for the moment, anyway." (From "Why Beauty Contest Winners areFailures")

On her beginnings in films: "I didn't take pictures seriously at first.Shortly after I signed my contract the studio told me they wereputting me into the Paramount school. They needed a group ofyoungsters and I hadn't been cast for a production, so they thought Imight as well go to school."I was the black sheep of the class. My teachers thought me quiteterrible and I agreed with them. But I considered the class silly andthe things they had to do a waste of time. In the class picture theyhad Buddy Rogers doing a graybeard and me an old lady--parts we'd neverbe allowed to do on the screen. I still think they should have cast usall as extras and let us work up into bits and then parts. Actualexperience is real. The other was unreal. I rebelled."When I came to Hollywood I saw that fooling around was no way tostay in pictures. It took me a while to make up my mind to work, butnow I'm determined to learn my job and get somewhere. Watch me."(From "Why Beauty Contest Winners are Failures")

On her dramatic lead under the name of Alison Loyd in Roland West's1931 film, "Corsair": "I have always wanted to play dramatic roles.But you know how it is out here. Casting directors have a way ofkeeping players in certain grooves and never letting them out. Onceyou make a good impression in a certain type of role, there ispractically no chance of getting away from it."Everyone has always thought of Thelma Todd as a rowdy comedienne.She never could get a chance to do anything else. But as Alison Loyd Iat least have a chance of being dissociated from my past roles."If I happen to score a success in 'Corsair,' I am sure my new namewill identify me with dramatic roles. Yet, even after establishingmyself as a dramatic actress, should a comedy role come along that Iwant to play, I at least will be able to get some consideration becauseof the years I spent as a comedienne." (From "How Thelma Became a NewWoman" by Dan Thomas, "The Helena Independent," October 11, 1931)

On working at Metro-Goldwyn-Mayer: "Having played in slapstick comedyfor so long, I walked into the studio with a large chip on my shoulder,just waiting for a fight; I hoped someone would make some sort ofremark about my comedy days, but--probably to mydisappointment!--everyone was charming to me. They're a grand bunch,and I like them all here, although, of course, the little Roach studiois swell. We are like a large family there--without the familysquabbles!" (From "Please, Teacher!," an interview with Thelma by JohnPaddy Carstairs, published in the British magazine, "Film Pictorial,"September 10, 1932)

On Hollywood: "I think the picture game is grand. I love it, but thereare some queer people in it--and some funny ones, too. But if you getused to Hollywood, you kid them along, and pretend that you are alittle dumber than you actually are--as a matter of fact, you have tobe pretty smart in this business."One thing they tried on me was to come up with a sarcastic smileand say: 'Well, Miss Todd, we are working late tonight!' Then theyused to wait and see my face drop. Instead I would say, 'All right,that's fine!' They know how disappointed most artistes are if theyhave to work late, but I don't mind in the least. After all, I getpaid for it and it's my job, so what the heck?" (From the "FilmPictorial" interview, "Please, Teacher!")

On comedy vs. drama: "When I first started out on the screen I playedserious leads. Then I did comedy with the Four Marx Brothers andhaven't been permitted since to play anything but comedy in Hollywood.I did play straight roles in England last spring and discovered it'smuch more difficult to make an audience laugh than to cry. So perhapsI'd better be content with my burlesque roles. I want to change butthe public won't let a comedienne change." (From "The Hammond Times,"February 21, 1934)

Posted by Benny Drinnon at 11:22 AM No comments:

A scrapbook of  Thelma Todd photos, which was on an online auction site. 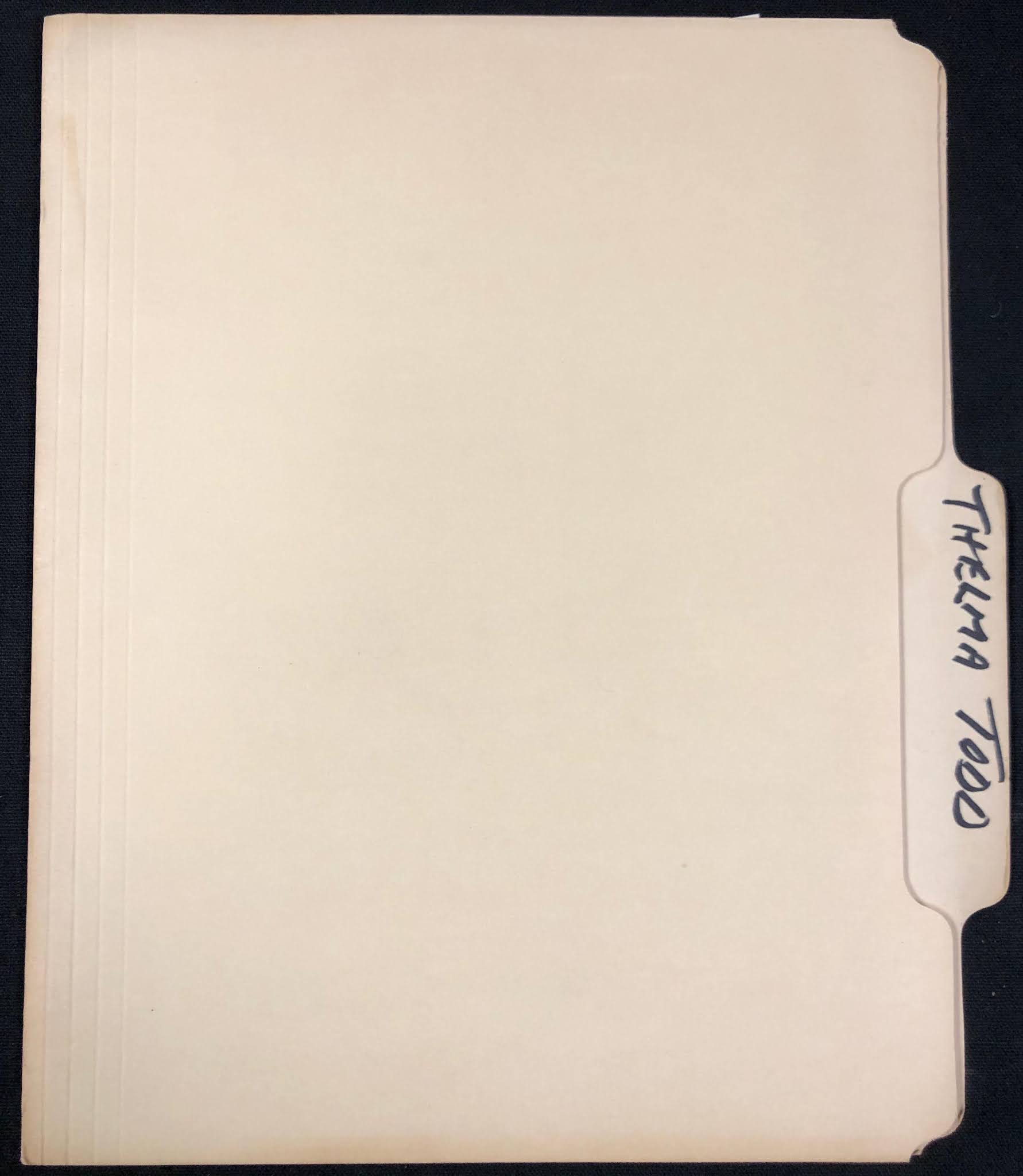 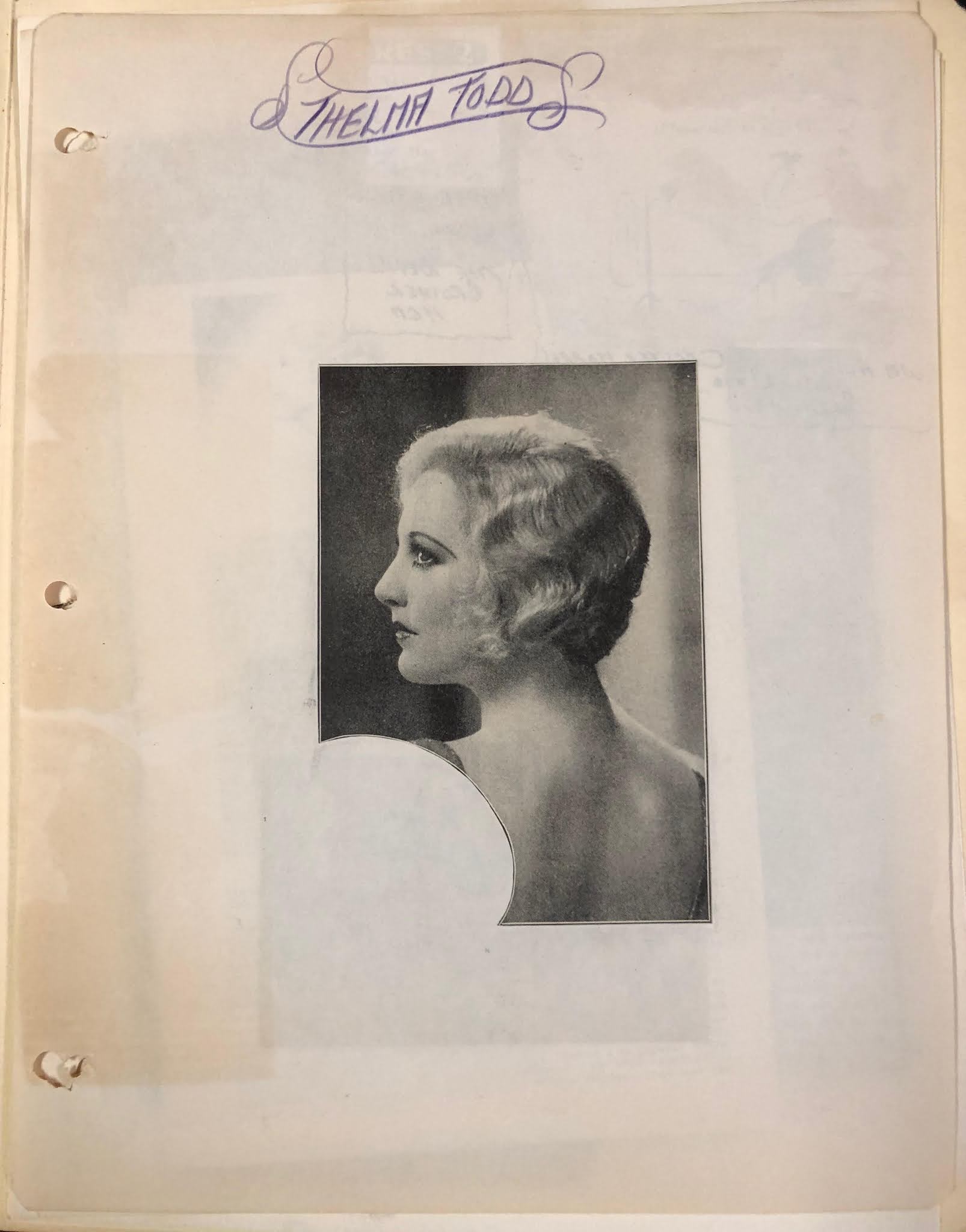 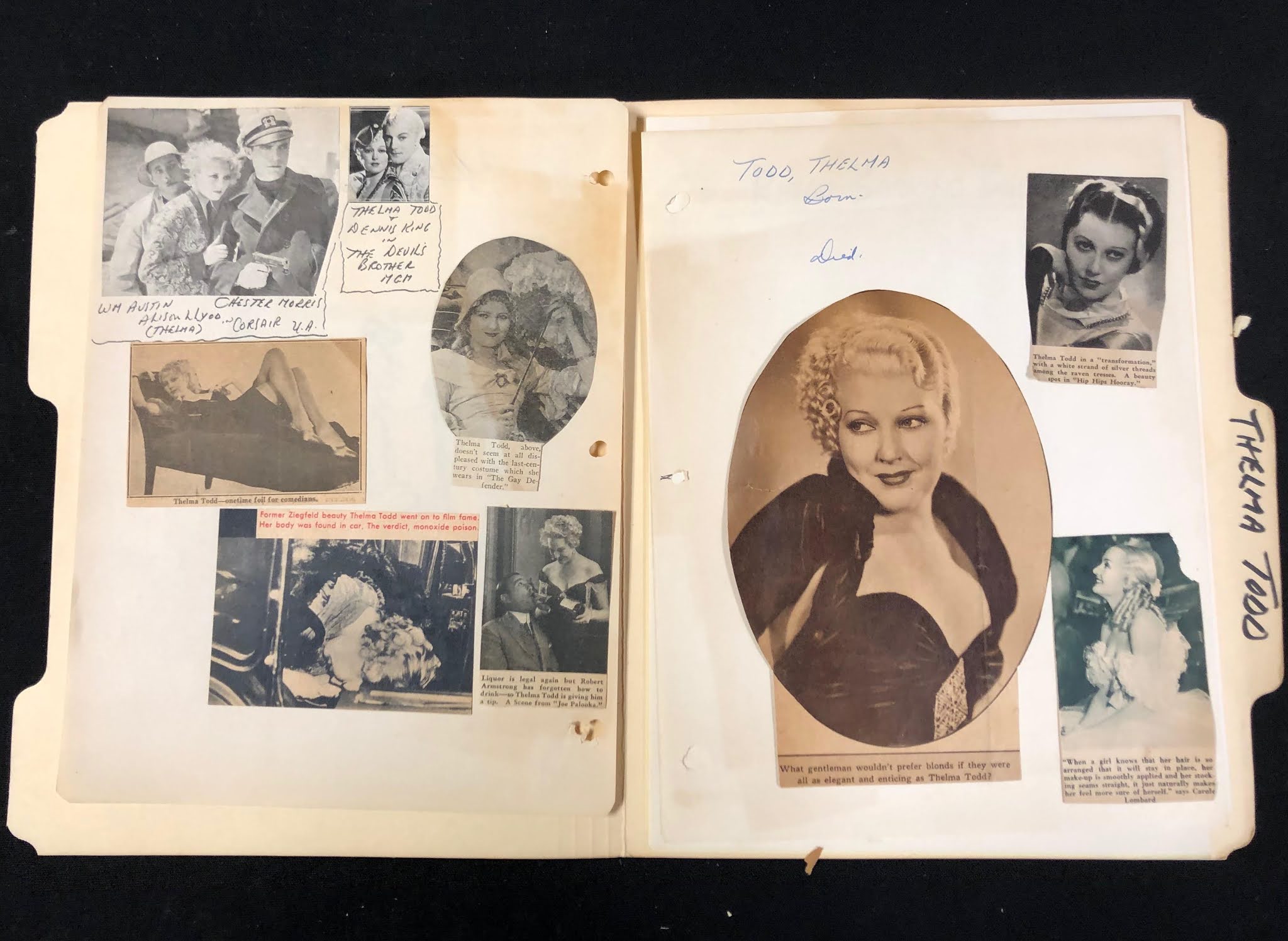 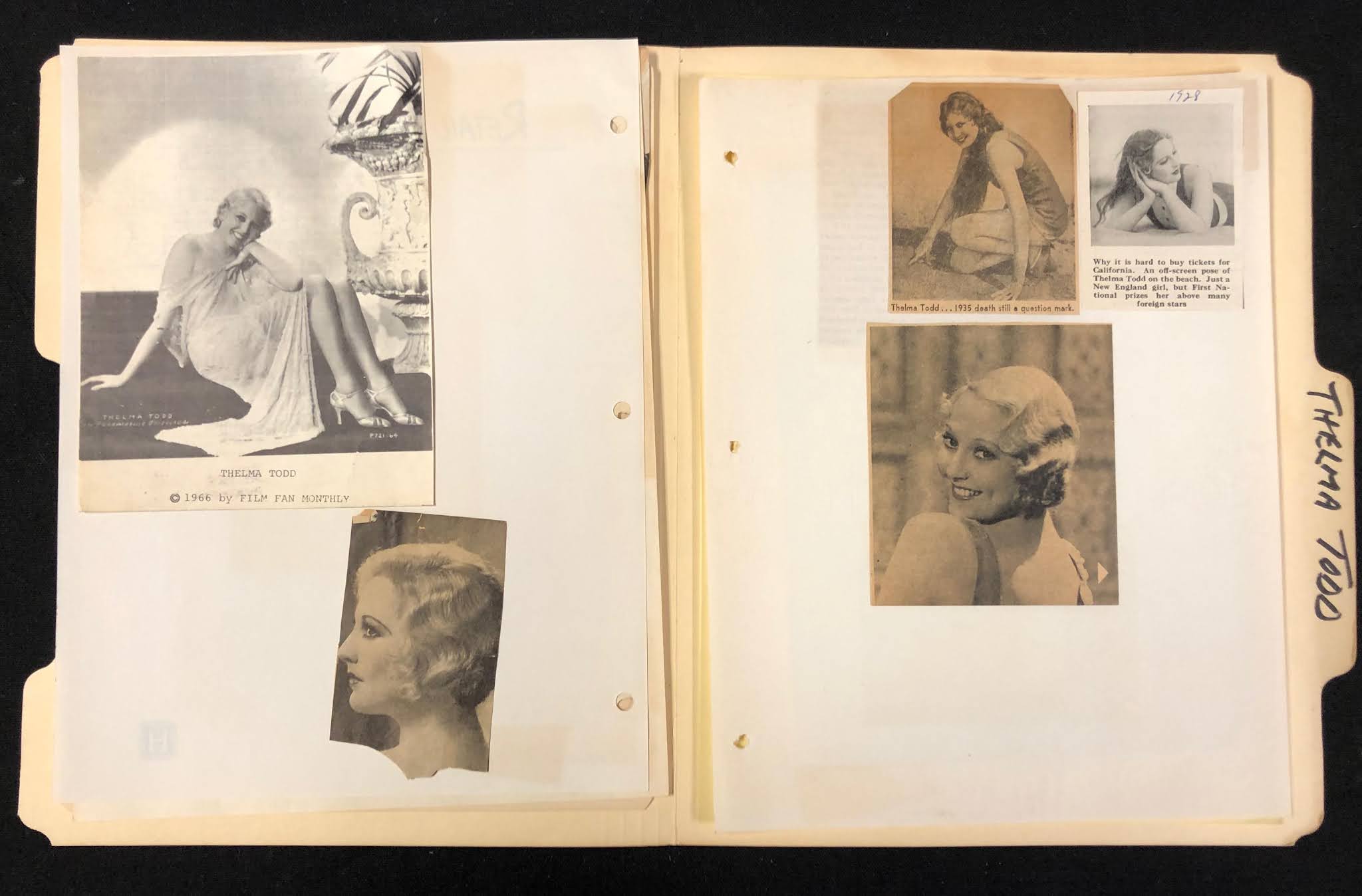 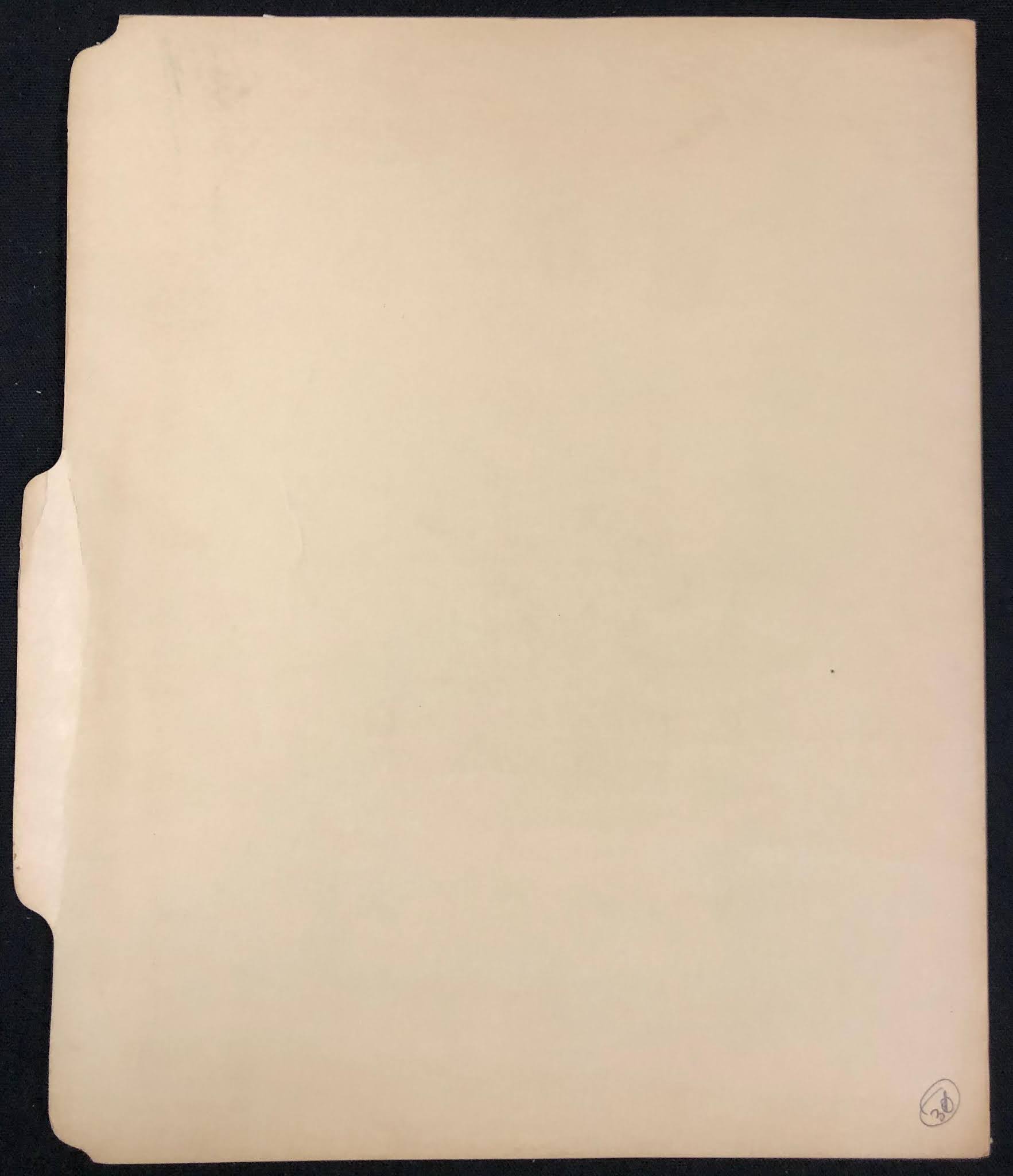 Posted by Benny Drinnon at 10:06 AM No comments:

Thelma Todd At Movie Premiere In 1929

Silent film footage of The Broadway Melody and The Divine Lady movie premieres in 1929. A list of stars who appear is below the video, and also a link to the scene with Thelma Todd.

Posted by Benny Drinnon at 10:39 AM No comments: