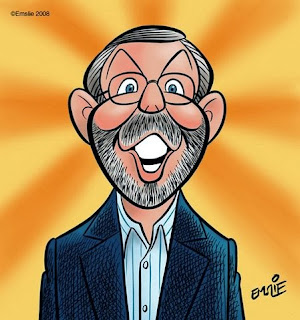 From Wikipedia, the free encyclopedia
Leonard Maltin (born December 18, 1950) is an American film critic and historian, author of several mainstream books on cinema, focusing on nostalgic, celebratory narratives. He is known for writing the shortest review in the U.S. and creating the Walt Disney Treasures series.

Maltin was born in New York City, son of singer Jacqueline (née Gould) [1923-2012], and Aaron Isaac Maltin [1915-2002], a lawyer and immigration judge.[1] He is married to researcher and producer Alice Tlusty. He has one daughter, Jessica Bennett ("Jessie") Maltin, born in 1986, who works with him (his production company, JessieFilm, is named after his daughter). Maltin is Jewish.[2] Maltin grew up in Teaneck, New Jersey, and graduated from Teaneck High School.[3] He was a friend of film critic Roger Ebert.[citation needed]

Maltin began his writing career at age fifteen, writing for Classic Images and editing and publishing his own fanzine, Film Fan Monthly, dedicated to films from the golden age of Hollywood. After earning a journalism degree at New York University, Maltin went on to publish articles in a variety of film journals, newspapers, and magazines, including Variety and TV Guide. In the 1970s Maltin also reviewed recordings in the jazz magazine, Downbeat. 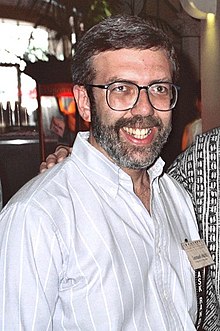 Maltin at Cinecon 26, circa 1990.
As an author, Maltin is best known for Leonard Maltin's Movie Guide (some editions titled as his ...Movie and Video Guide), a compendium of synopses and reviews that first appeared in September 1969 and has been annually updated since October 1987. (It was published under the title TV Movies until the 1990s, and in 2005 spawned a spin-off, Leonard Maltin's Classic Movie Guide, limited to films released in 1960 and earlier to allow the regular book to cover a larger number of more recent titles.) He has also written several other works, including Behind the Camera, a study of cinematography, The Whole Film Sourcebook, Leonard Maltin's Movie Encyclopedia, Our Gang: The Life and Times of the Little Rascals, and Of Mice and Magic: A History of American Animated Cartoons.
Since May 29, 1982, Maltin has been the movie reviewer on the syndicated television series Entertainment Tonight. He also appears on the Starz cable network, and hosted his own syndicated radio program, Leonard Maltin on Video, as well as the syndicated TV show Hot Ticket with Boston film critic Joyce Kulhawik (originally E! personality and game show host Todd Newton). Maltin currently hosts a television show called Secret's Out on ReelzChannel movie network. He also spearheaded the creation of the Walt Disney Treasures collectible DVD line in 2001,[4] and continues to provide creative input and host the various sets.
Maltin appeared on Pyramid twice as a celebrity player, in 1987 on the CBS $25,000 version, and in 1991 on the John Davidson version. He also appeared on Super Password as a celebrity guest in 1988.
In the mid-1990s, Maltin became the president of the Los Angeles Film Critics Association and is on the Advisory Board of the Hollywood Entertainment Museum. For nearly a decade, Maltin was also on the faculty of the New School for Social Research in New York City. He currently teaches in the School of Cinematic Arts at the University of Southern California.
In 1998, Maltin settled a libel suit brought by former child star Billy Gray, of Father Knows Best fame, whom Maltin identified as a drug addict and dealer in his review of the film Dusty and Sweets McGee for his movie guide. The statement appeared in print for nearly 25 years before Maltin publicly apologized for the error.[5]
Maltin currently hosts The Maltin Minute for DirecTV customers. He also wrote the introduction for The Complete Peanuts: 1983-1984.
In 1990, he took a look at the MGM years of The Three Stooges in a film called The Lost Stooges, available on a made-to-order DVD through the Warner Archive Collection.

Maltin was portrayed in an episode of the animated comedy South Park called "Mecha-Streisand" where he, along with actor Sidney Poitier and singer Robert Smith, fight Barbra Streisand, who has assumed the form of Mecha-Streisand, a giant, Godzilla-like robot version of herself. His own gigantic form was reminiscent of Ultraman with his initials on his chest.
He also appeared as himself in Gremlins 2: The New Batch. In a short segment, he gives a bad review of the first film (Gremlins) as several of the creatures creep up on him and strangle him to death (in his guide, Maltin's three-star review of the movie noted that it contained "gratuitous cameo appearances"). This was further spoofed in the Mad magazine parody of Gremlins 2, in which Maltin protests that he is going to be eaten by the Gremlins for giving their first film a bad review when Roger Ebert gave an even more scathing review, whereupon the Gremlins reply that they are waiting until Thanksgiving to attack Ebert, as "he will feed a family of fifteen"! He also made an appearance on the cartoon show Freakazoid! where he voiced himself, only to be abducted by monsters. And while he's been a "talking head" in countless documentaries, he also appeared as himself in a faux documentary, Peter Jackson's "Forgotten Silver."
Maltin starred on an episode of Entertainment Tonight, where he was presenting a time machine akin to one in the film The Time Machine. He sits in the machine and then vanishes, as does the character in the film.
Maltin is one of the few people to appear as a "guest star" on Mystery Science Theater 3000; during a Season Nine episode, he was forced by Pearl Forrester to retract his endorsement of the film Gorgo. In an earlier episode featuring The Undead, Mike Nelson impersonates Maltin and apologizes to viewers for his good review, saying he must have been on drugs. Upon this admission, he was awarded the Goatee of the Millennium award. Additionally, his rating of two-and-a-half stars to the film Laserblast is ridiculed in the episode featuring that film.

Maltin at the Santa Barbara International Film Festival in 2005.
In The Simpsons episode "A Star is Burns", Marge says "Did you know there are over 600 critics on TV and Leonard Maltin is the best looking of them all?". Lisa replies "Ewwww!"[6] In the 1995 video release of the original Star Wars trilogy, there was an interview with George Lucas conducted by Maltin included before the start of the movies. Maltin is listed in the Guinness Book of World Records for the world's shortest movie review; his two-star review of the 1948 musical Isn't It Romantic? consists of the word "No".[7] In 1985 he delivered a three-word movie review on Entertainment Tonight for that year's horror film spoof, Transylvania 6-5000. The review begins with a silent Maltin swaying to a recording of the Glenn Miller Orchestra playing "Pennsylvania 6-5000", wherein the instrumental melody is interrupted by the sound of a telephone ringing (part of the original recording), after which the band chants the title of the song. In his review, Maltin timed it so that his review began with the phone ringing: "Transylvania 6-5000 ... stinks!" In 2004 he delivered a five-word review for Scooby Doo 2: Monsters Unleashed. His two-star review consisted of the statement "It is what it is."
Maltin also selected and hosted a compilation of National Film Board of Canada animated shorts, Leonard Maltin's Animation Favorites from the National Film Board of Canada.[8]
Comedian Doug Benson's podcast "Doug Loves Movies" features a segment called The Leonard Maltin Game, in which the guest must guess the name of a movie based on a subset of the cast list in reverse order and a few intentionally vague clues from the capsule review of the movie in Leonard Maltin's Movie Guide. Maltin appeared on the podcast in February 2010 and played the game himself. He appeared on the show again in August 2010. In November 2010 Benson and Maltin played the game on Kevin Pollak's Chat Show. Maltin has repeated his appearances on Doug Loves Movies in September 2011 with Jimmy Pardo and Samm Levine, in September 2012 with Chris Evans and Adam Scott, and in November 2013 with Peter Segal, "Werner Herzog," and Clare Kramer.

I had a little on Leonard Maltin on this blog before at http://benny-drinnon.blogspot.com/2019/06/leonard-maltin.html and I've had this for a while, I just hadn't put it through till now.


I've drawn a character representing Leonard Maltin myself, though that was in unpublished comics, which could be seen as less popular than programs run on cable stations that not everyone has seen.  I had that character rating things, not necessarily anything important, he would just rate things. A character named "Maltie" also appeared in a story I wrote.which was supposed to be a Thelma Todd adventure, as one of a number of jolly elves who somehow failed to live up to expectations, none of them being particularly jolly.

But this blog is more concerned with the real life adventures of  Leonard Maltin, some of which also involve Thelma Todd. 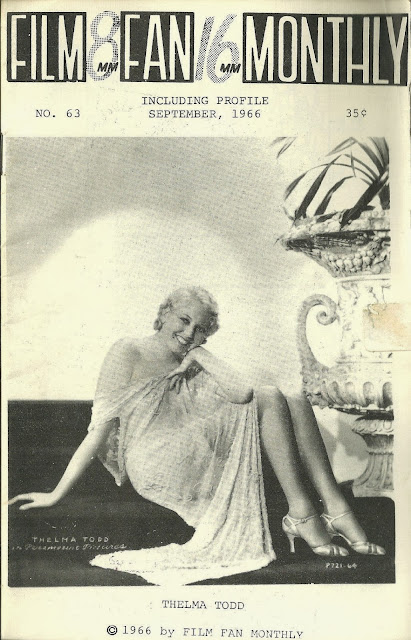 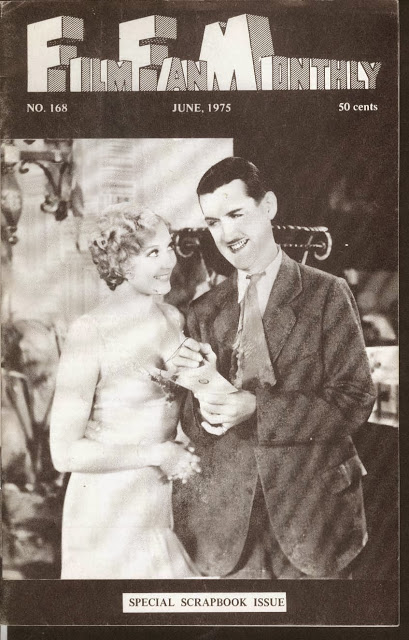 Thelma Todd on top row, second from left: next one to right is Billy Gilbert. 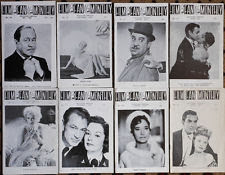 Thelma Todd may be seen making use of grapefruit slightly above center. 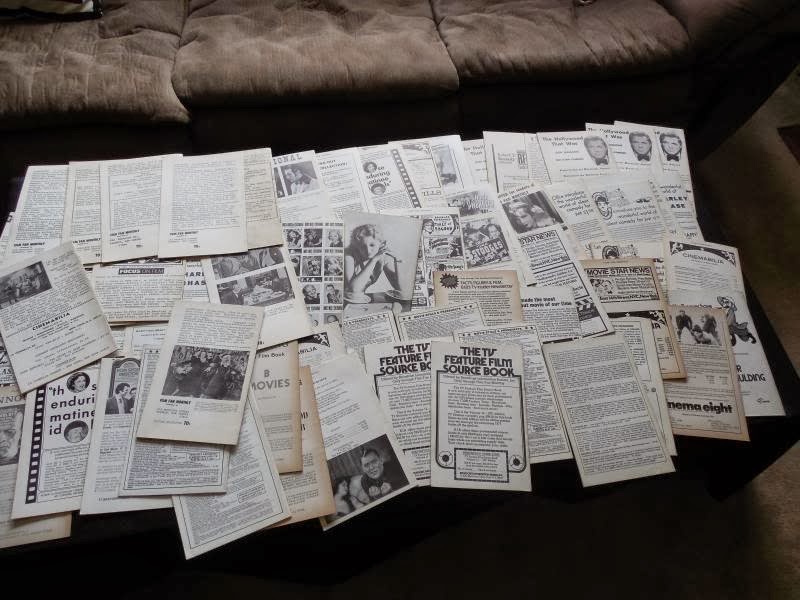 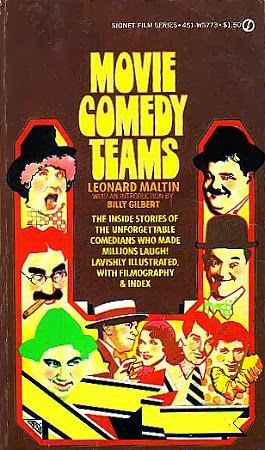 and THE GREAT MOVIE SHORTS 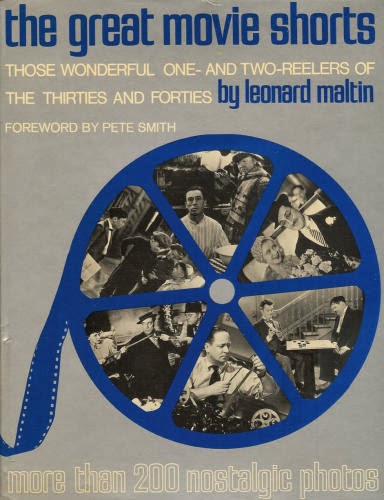 cover the films in the Thelma Todd series as well as those of other comedians in this period.

Maltin was later able to show some of the films on a program called "Leonard Maltin Presents" on the Odyssey channel, which began in 1999.

This is the intro for "The Boyfriends - Love Fever".

It seems that the Odyssey channel didn't get a lot of distribution on cable tv, and that as a result this program didn't get a lot of exposure during the years it was run. Which was unfortunate, as it was probably the best thing that Maltin did for television.


We've talked about the cartoon character "Tinker Bell" and Marilyn Monroe here before, they put a segment at the end of the "Peter Pan" videotape where Leonard Maltin states that the story that Tinker Bell was modeled after Marilyn Monroe was false. However, his 1973 book THE DISNEY FILMS states:

"The actual design of Tinker Bell was another problem, since the sprite had always been shown as merely a beam of light ( even in the silent film* ). Existing character sketches trace Tinker Bell's development from the inception in 1938 to the design finally used: in the 1940's the Disney artists considered modeling her after the current conception of female attractiveness, an idea that would have proved disastrous, if employed. Disney claimed in a magazine article that the final decision on Tinker Bell's looks was cemented by the popularity of Marilyn Monroe, after whose figure Tinker Bell was modeled."

This is almost the same story as in the segment at the end of the videotape, except that there they replace the part about Marilyn Monroe with Maltin's claim that the Marilyn Monroe story was false. Since Leonard Maltin himself had previously had the same story in his own book and attributed it to Walt Disney, we have a situation where we are told by the same man to accept the a story at one point and to reject it at another, with no reason given for the change. Actually there is reason to believe that the cartoon character was modeled after Marilyn Monroe, who was in fact well known at the time in spite of Maltin's claim that she was an unknown at the time that PETER PAN was released.

There is a tendency for the modern media to seize upon certain stories and insist that everyone accepts them, often for no reason or no reason that can be seen. This appears to be one of these cases.


*The silent PETER PAN has since become available. Tinkerbell is portrayed by an actress in the film. 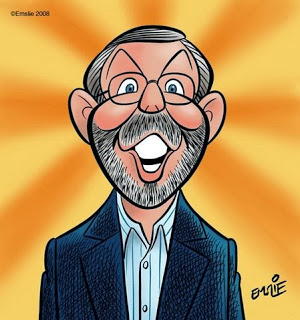