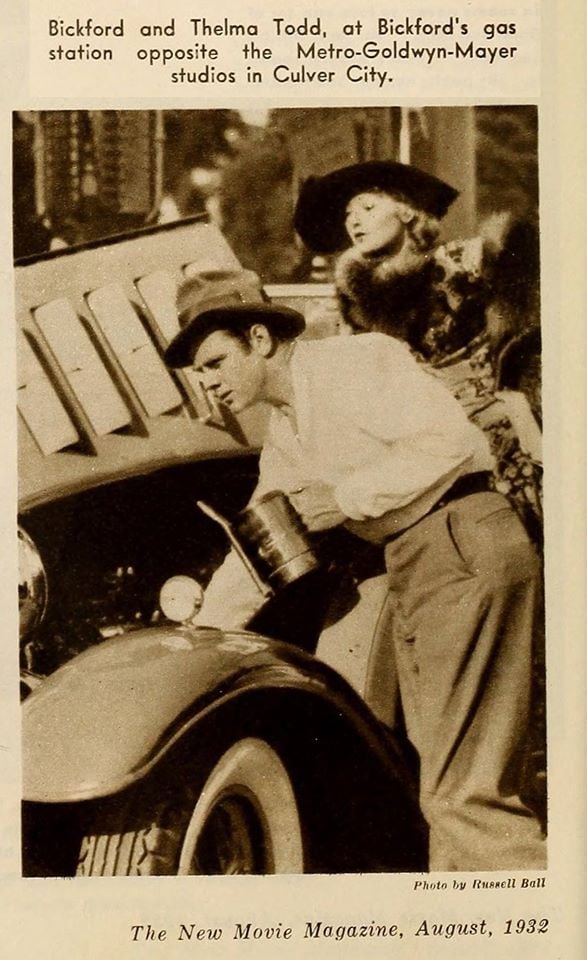 I wonder if the car in this photo in the August 1932 issue of the "New Movie Magazine" is Thelma's Lincoln. The earliest reference to it I have found in print to date is in a column in the April 6, 1932 edition of the "Hollywood Citizen-News." In "Roamin' 'Round in Hollywood with Dallas MacDonnell," she noted: "Here and there in Hollywood we catch glimpses of the following. . . .Thelma Todd, driving along in her new Lincoln." At that time, as reported in the "New Movie," Charles Bickford had opened as a sideline to his flourishing film career a service station just across the street from the MGM studio in Culver City. While Thelma was, of course, more often in Culver City than anywhere else due to her work with Roach, I believe the only time she worked at the MGM studio itself was when she made "Speak Easily" with Keaton and Durante in mid-May to early June 1932. As she would have driven there in her new Lincoln Phaeton, perhaps she took it across the street to Bickford's gas station for a fill-up and a photo-op. Can any of those here familiar with Thelma's Lincoln determine from what is shown of the car in this photo if it might be her Lincoln?

Posted by Benny Drinnon at 1:12 PM