A look at Wikipedia, or, what goes up must come down by another's hand.

Thelma Alice Todd[1] (July 29, 1906 – December 16, 1935) was an American actress. Appearing in about 120 pictures between 1926 and 1935, she is best remembered for her comedic roles in films like Marx Brothers' Monkey Business and Horse Feathers, a number of Charley Chase's short comedies, and co-starring with Buster Keaton and Jimmy Durante in Speak Easily. She also had roles in Wheeler and Woolsey farces, several Laurel and Hardy films, the last of which (The Bohemian Girl) featured her in a part that was truncated by her death.

Todd was born in Lawrence, Massachusetts to John and Alice Todd, and was a bright student who achieved good academic results. She intended to become a school teacher. However, in her late teens, she began entering beauty pageants, winning the title of Miss Massachusetts in 1925. While representing her home state, she was spotted by a Hollywood talent scout and began her career in film.

in Corsair (1931)
During the silent era, Todd appeared in numerous supporting roles that made full use of her beauty but gave her little chance to act. With the advent of the talkies, Todd was given opportunity to expand her roles when producer Hal Roach signed her to appear with such comedy stars as Harry Langdon, Charley Chase, and Laurel and Hardy. In 1931 she was given her own series, teaming with ZaSu Pitts (pronounced "Zay-soo," also her character's name) for slapstick comedies. This was Roach's attempt to create a female version of Laurel and Hardy. When Pitts left Roach in 1933, she was replaced by Patsy Kelly. The Todd shorts often cast her as a working girl having all sorts of problems, and trying her best to remain poised and charming despite the embarrassing antics of her sidekick.
In 1931, Todd became romantically involved with director Roland West,[1][2] and starred in his film Corsair.
Thelma Todd became highly regarded as a capable film comedian, and Roach loaned her out to other studios to play opposite Wheeler & Woolsey, Buster Keaton, Joe E. Brown, and the Marx Brothers. She also appeared successfully in such dramas as the original 1931 film version of The Maltese Falcon starring Ricardo Cortez as Sam Spade, in which she played Miles Archer's treacherous widow. During her career she appeared in 119 films although many of these were short films, and was sometimes publicized as "The Ice Cream Blonde."
In August 1934, she opened a successful cafe at Pacific Palisades, called Thelma Todd's Sidewalk Cafe, attracting a diverse clientele of Hollywood celebrities as well as many tourists.[3]
Todd continued her short-subject series through 1935, and was featured in the full-length Laurel and Hardy comedy The Bohemian Girl. This was her last film; she died after completing all of her scenes, but most of them were re-shot. Producer Roach deleted all of Todd's dialogue and limited her appearance to one musical number.[4]

On the morning of Monday, December 16, 1935, Thelma Todd was found dead in her car inside the garage of Jewel Carmen, a former actress and former wife of Todd's lover and business partner, Roland West. Carmen's house was approximately a block from the topmost side of Todd's restaurant. Her death was determined to have been caused by carbon monoxide poisoning. Todd had a wide circle of friends and associates as well as a busy social life; police investigations revealed that she had spent the last night of her life at the Trocadero, a popular Hollywood restaurant, at a party hosted by entertainer Stanley Lupino and his actress daughter, Ida. At the restaurant, she had had a brief but unpleasant exchange with her ex-husband, Pat DeCicco. However, her friends stated that she was in good spirits, and were aware of nothing unusual in her life that could suggest a reason for committing suicide.
The detectives of the LAPD concluded at first that Todd's death was accidental, the result of her either warming up the car to drive it or using the heater to keep herself warm. Other evidence, however, pointed to foul play. The Grand Jury ruled her death as suicide. Since her body was cremated, a second, more thorough autopsy could not be carried out. It was believed that she was the target of extortion, but refused to pay. It is also possible that she was locked in the garage by her assailant after she started the car. Blood from a wound was found on her face and dress, leading some to believe that she was knocked unconscious and placed in the car so that she would succumb to carbon monoxide poisoning.
Todd's death certificate states her cause of death as accidental carbon monoxide poisoning. She was cremated; after her mother's death, her remains were placed in her mother's casket and buried in Bellevue Cemetery in her home town of Lawrence, Massachusetts.
Complicating matters, there was an apparent murder two years later involving Todd's ex-husband Pat DiCicco and another movie actor as the victim. According to E.J. Fleming's book The Fixers (about MGM's legendary "fixers" Eddie Mannix and Howard Strickling), Wallace Beery (one of MGM's top stars), gangster Pat DiCicco, and Albert R. "Cubby" Broccoli (who was also DiCicco's cousin and eventual producer of the James Bond films) allegedly beat comedian and movie actor Ted Healy to death in the parking lot of the Trocadero nightclub on December 21, 1937. The book claims that Beery was sent to Europe by the studio for a few months, while a story was concocted that three college students had killed Healy. Immigration records confirm a four-month-long trip to Europe on Beery's part immediately after Healy's death, ending April 17, 1938.[5] A pencil drawing of Beery survives that was done on a film set by Healy, an amateur artist as well as the organizer and original leader of The Three Stooges.

For her contribution to the motion picture industry, Thelma Todd has a star on the Hollywood Walk of Fame at 6262 Hollywood Blvd. 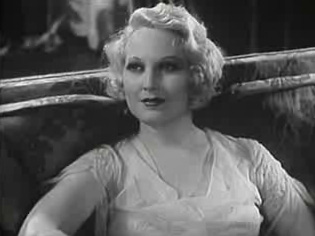 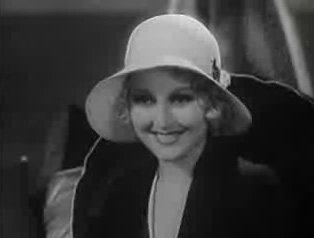 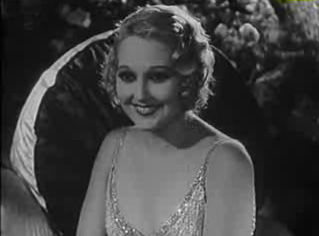 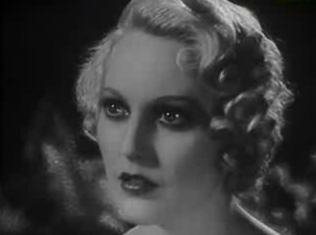 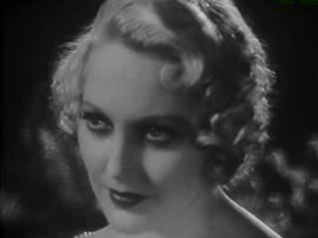 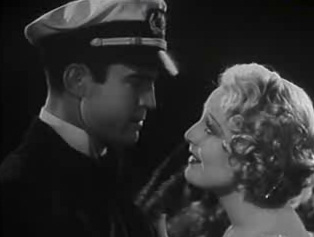 
Here we have the wikipedia entry for Thelma Todd. It's been that way a while, I guess, but there is no guarantee that it will remain as it is since anyone that wants to can put in whatever they want. I don't think I'll put anything else in as what I had previously put in was all removed.

The entry is mostly OK, but there are some problems with it. Thelma Todd didn't actually get into movies because she won a beauty contest:  Paramount was sent her picture by Napoleon Demara, a partner in a local film exchange. 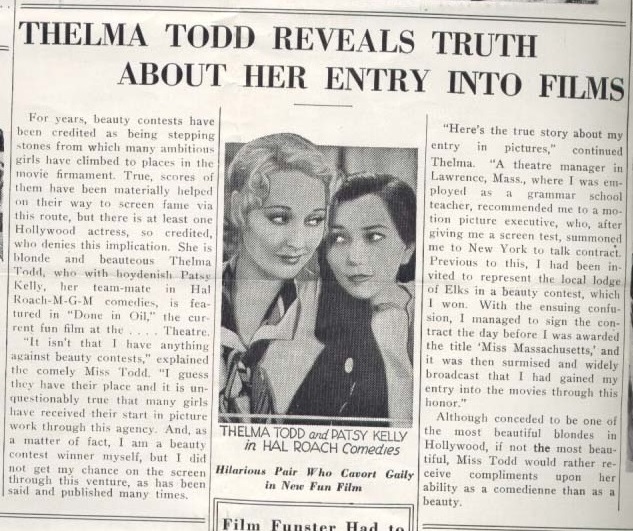 The grand jury did not rule her death a suicide, but ended as a hung jury because they were unable to come to a conclusion as to whether her death had been murder, suicide, or an accident.

Many sources will tell you that Thelma Todd came to Hollywood because of a beauty contest or that the grand jury ruled her death a suicide. That is because they all tend to repeat each other, not because the information that they have is correct. A great many errors have crept into our version of history because they are widely believed to be true by people who simply do not know any better.