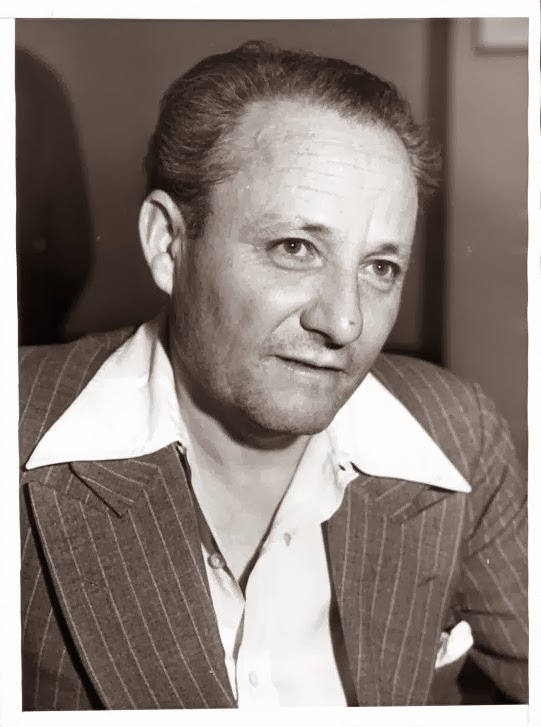 Roland West was the one who changed Thelma Todd's name to "Alison Loyd" for the movie CORSAIR. They later operated the Sidewalk Cafe together.

West was born Roland Van Zimmer to a theatrical family in Cleveland, Ohio, he began acting in vaudeville productions as a teenager. By his early twenties, he was writing and directing vaudeville productions.
Shortly afterward, he began directing films such as The Monster (1925) with Lon Chaney, Sr., The Bat (1926) based on the novel by Mary Roberts Rinehart (dramatized on stage by Rinehart and Avery Hopwood), Alibi (1929), The Bat Whispers (1930) (also based on the Rinehart novel and play), and Corsair (1931).
So established was West by 1930, that The Bat Whispers was billed on posters as Roland West's The Bat Whispers. However, he made only one more film in his career.
Roland West's first wife was beautiful actress Jewel Carmen, although the two would eventually become estranged, and West began a longtime affair with actress Thelma Todd. Following Todd's death in 1935 and his divorce from Carmen in 1938, he married actress Lola Lane sometime after June 25, 1946 [1] and remained married to her until his death in 1952.
Following Todd's death and his divorce, West rarely worked and withdrew into virtual seclusion. In the early 1950s his health began to decline and he suffered a stroke and a nervous breakdown. He died in Santa Monica, California in 1952, aged 67.

West has long been considered a murder suspect in many conspiracy theories due to the unusual circumstances surrounding the death of his longtime mistress, actress Thelma Todd. Todd and West began their affair shortly after meeting on a yachting excursion to Catalina Island in 1930. The two eventually became business partners and would move in next door to each other in California. Their relationship was described as volatile and West was described as being controlling and possessive.[2]
Todd was found dead in the garage of her home in December 1935. An autopsy concluded that she died of accidental carbon monoxide poisoning caused by the exhaust of her car. Some conspiracy buffs have suggested that Todd was really murdered by West aboard his yacht, the Joyita. This theory states that he then planted her body in her garage to be found later and staged the scene to resemble an accident. The Joyita would gain further infamy in 1955 when her entire complement of 25 passengers and crew went missing in the South Pacific.
No evidence concerning allegations against West has ever surfaced and neither he nor anybody else was ever charged with any crime surrounding Todd’s death. (According to the Internet Movie Database, in 1952 West gave a deathbed confession to actor Chester Morris implicating himself in Todd's death, but West was in ill health by that time and the confession was never independently confirmed.) However, the bad publicity surrounding his alleged involvement in Thelma Todd's death hurt his reputation and have largely overshadowed his film work.

"West has been variously described as 'very closed in', 'a very odd man,' and 'vacant'. The fact that he kept to himself as much as he did - even shutting himself off from those he worked with - has rendered him something of a mystery man." - John McCarty, THE FEARMAKERS, 1994.

Because West tended to be distant, sneaky, and even legally dubious, certain aspects of his life seem somewhat murky to this day. His relationship with Thelma Todd was controversial. As the term "mistress" is used to mean a kept woman, I would not use that term to describe Thelma Todd's relationship with West, who did not support her. West himself said," We were partners. If she wanted to buy lunch, she bought it. I bought mine. Would you believe it? I never bought Thelma Todd anything - no jewelry, no clothes, no presents. The only flowers I ever bought Thelma were the flowers I put on her casket." They were involved in business, but they were involved in private life as well.

According to Donati, West also was not legally married to Jewel Carman, although she is frequently referred to as his wife. It also seems that West didn't support Jewel Carmen, who was rich, and was said to have been the one who financed the Sidewalk Café.

Roland West did not work in the movies after making the movie CORSAIR with Thelma Todd. His career did not end because of the death of Thelma Todd, as has frequently been said. It had ended some time before that, by his own choice. West did not seem to like working in a studio. While still employed by the movie industry, West was known to work at night because he didn't like studio bosses around to tell him what to do.

West did regard producer Joseph Schenck as a friend, and was involved in an income tax evasion scheme with him which was also related gambling as it involved a casino that Schenck owned in Mexico. All of this came out when Schenck came to trial for income tax evasion in 1941.

As the Sidewalk Café is said to have operated at a loss, it is likely that it was, among other things, a tax shelter. Roland West continued to  operate the Sidewalk Café for years and left it to Lola Lane when he died, after which she gave it to the Paulists, the present owners.

You occasionally come across references to Roland West having made a "deathbed confession" to having killed Thelma Todd. This is an "as told to story", supposedly having been handed down from Chester Morris, who was himself dead and unable to verify it when the story first saw print. There is no proof that Roland West every made such a confession.

There was a lot of suspicion of West, and there was reason to question his testimony:

Brad Schreiber:
"Could jealousy as a spurned/potential lover have been a motivational factor for West? Certainly, he contradicted himself in testimony. West insisted he heard running water in Todd's bathroom around 3:30 a.m. but did not find her in her room when he arose later in the morning. He then revised his statement and claimed Shafer told him the water noise "could have been the carbonator that pumps water to the fountain," downstairs in the cafe. Also unconvincing was West's initial assertion that his dog began whining just before the water sound and "never" whined normally. Some pages later, he changed his words, saying his dog whined every time its blanket came off."


But it's also been said that Roland West was blamed just because he was handy, and because he wasn't well liked. But then, he himself disliked some of the same people.


In 1934, Harrison Carroll reported that Thelma Todd's interest in the Sidewalk Café was listed under the name of "Alison Loyd", the name she had used for the movie CORSAIR in 1931. Usually this name was thought of as something of a joke, but West took it seriously and made a point of putting the name "Alison" on the flowers he sent to Thelma Todd's funeral. It was like he was sending a message out to the world that he thought he was right and everyone else was wrong.


Concerning the story that Thelma Todd died on the Joyita, I think it was connected with that vessel's later notoriety, when Thelma Todd was lumped in with the misfortunes of other people who were associated with the vessel. 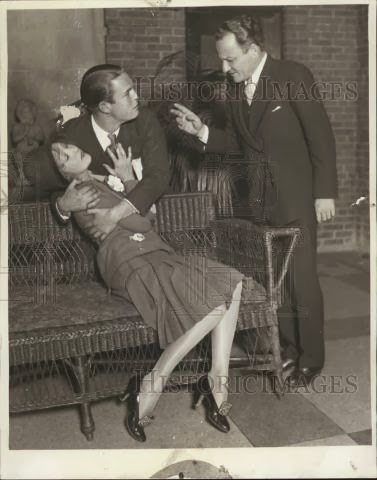 The caption for this picture was "Wrong way to choke a lady". 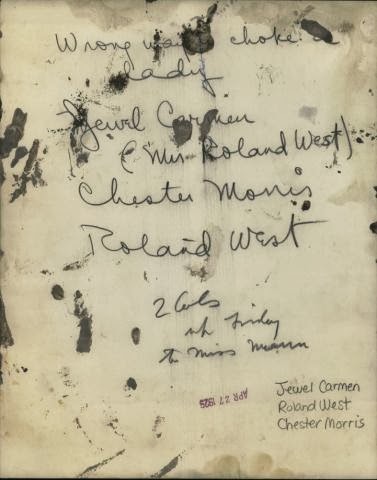 Chester Morris and Jewel Carmen as he signs a contract to produce a radio version of their movie ALIBI.

Roland West with brother-in-law Rudy Schafer in the garage where Thelma Todd was found dead. 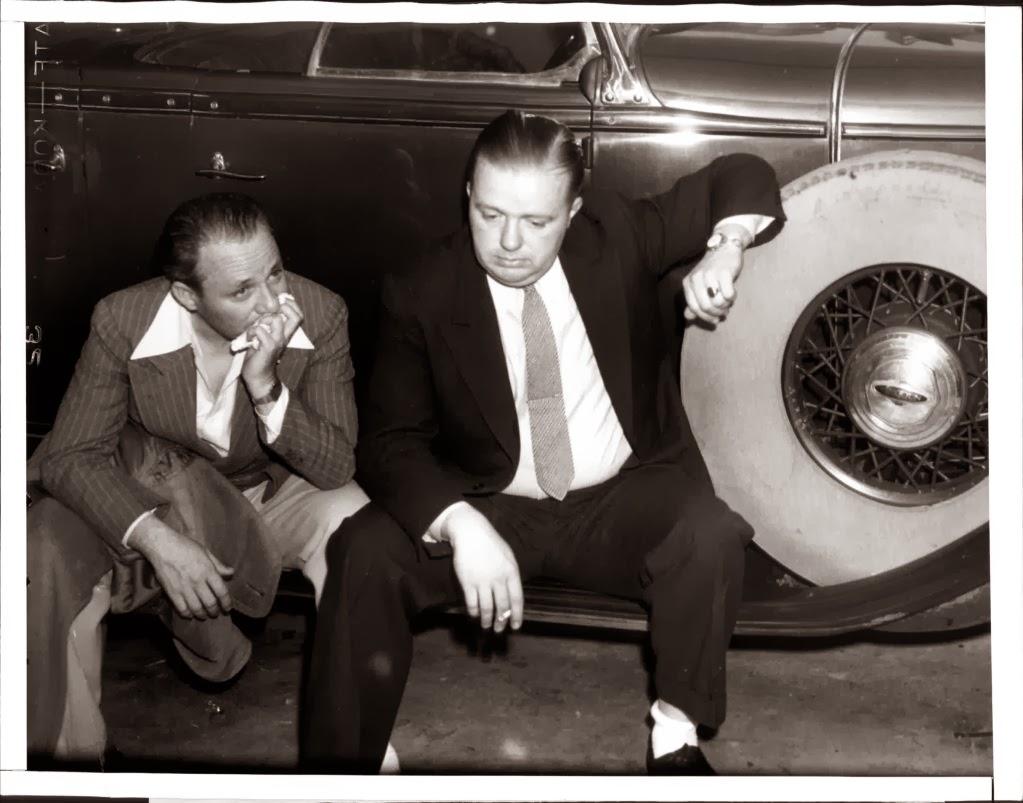 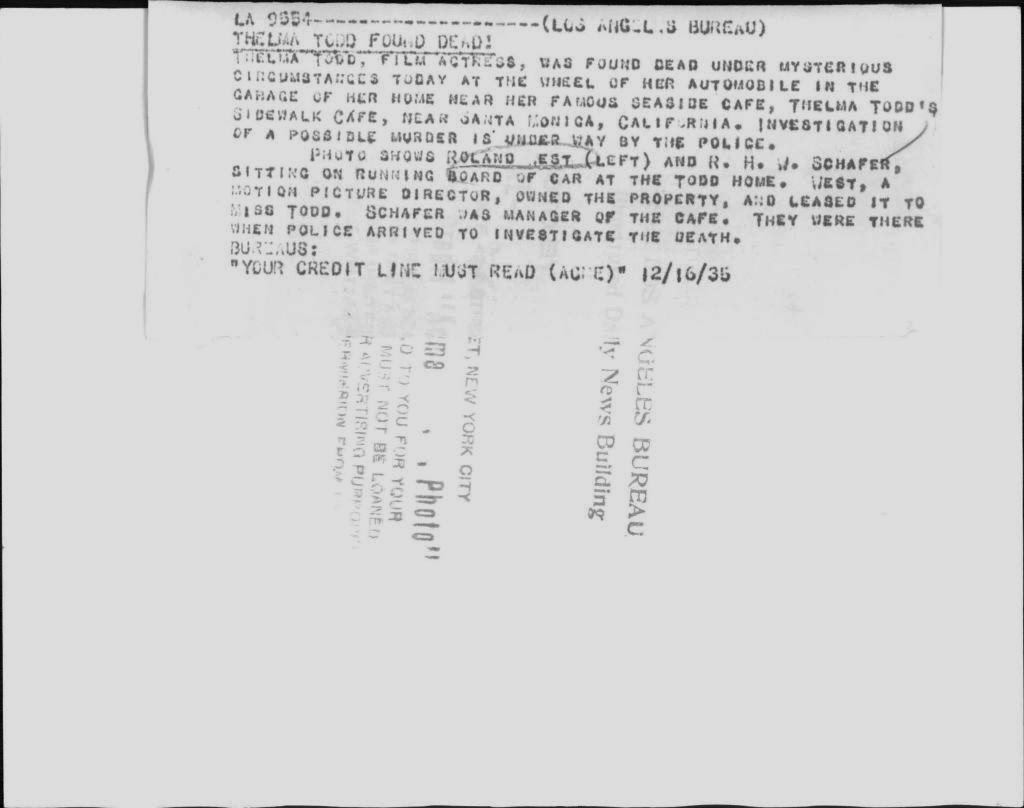 Roland West with Thelma Todd's mother, who stood by him while others viewed him with suspicion. 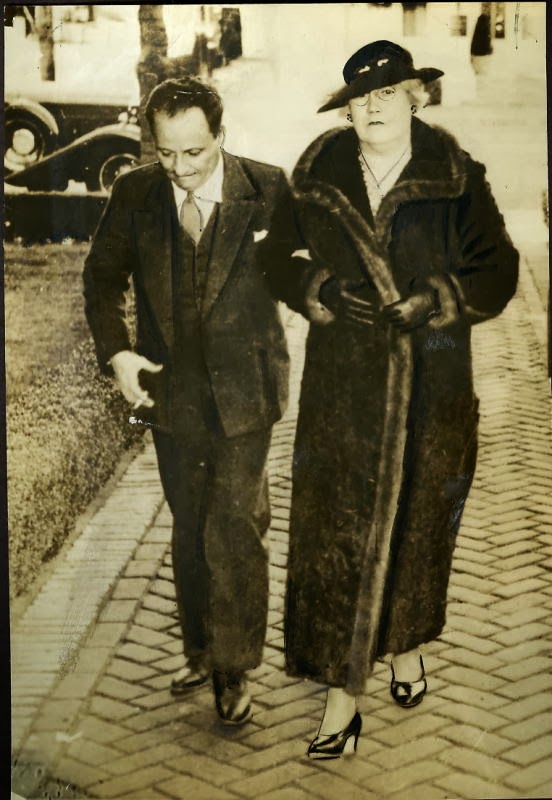 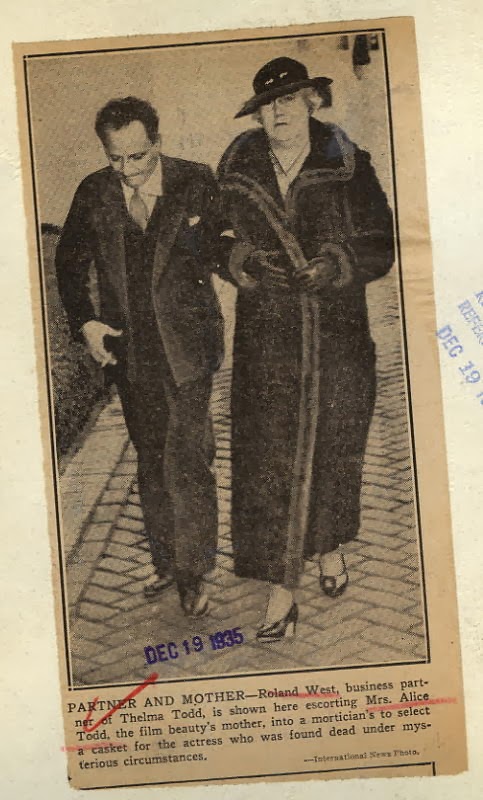 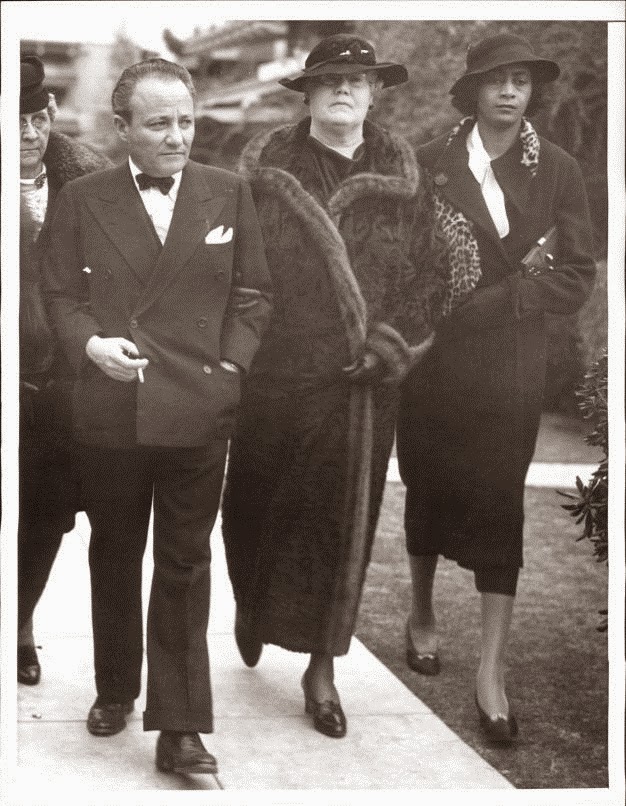 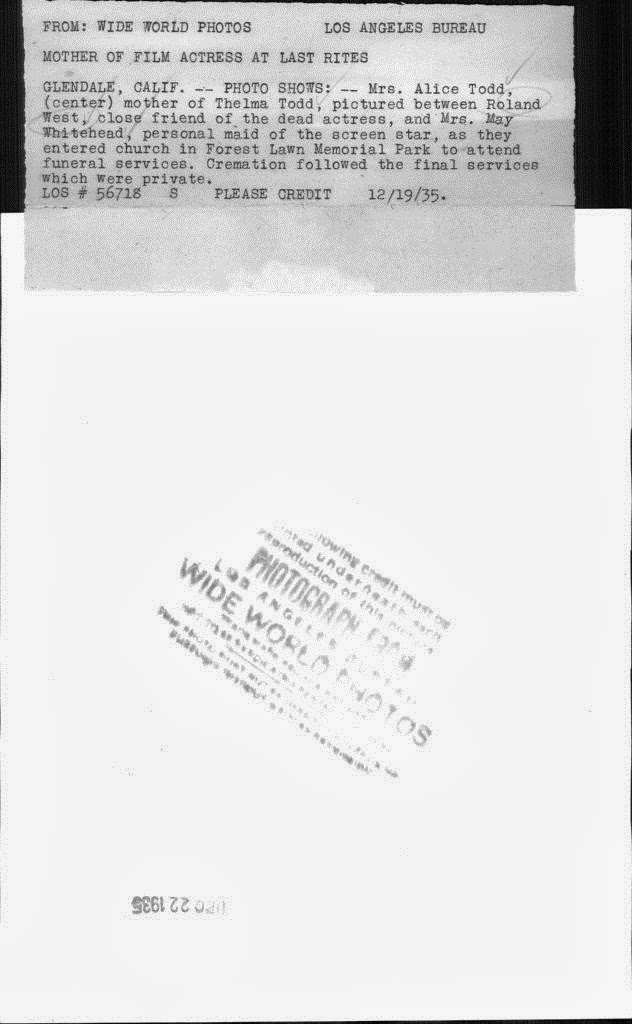 Lola Lane was in the movies in the thirties, 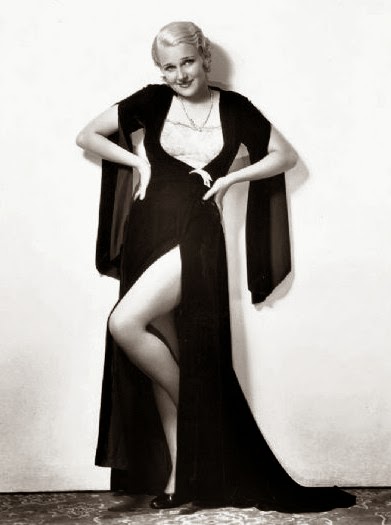 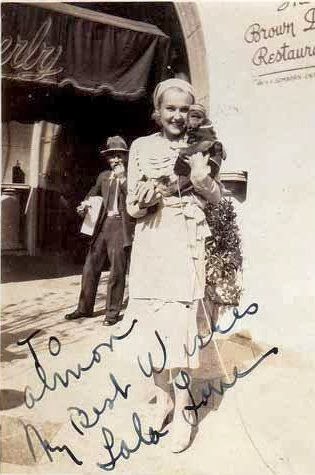 One of the old photos that had been run before when Thelma Todd was in the headlines was used again when Roland West died.

The new caption can be seen on the back above the earlier caption. The date at the top of the picture was from the first time they used the picture. 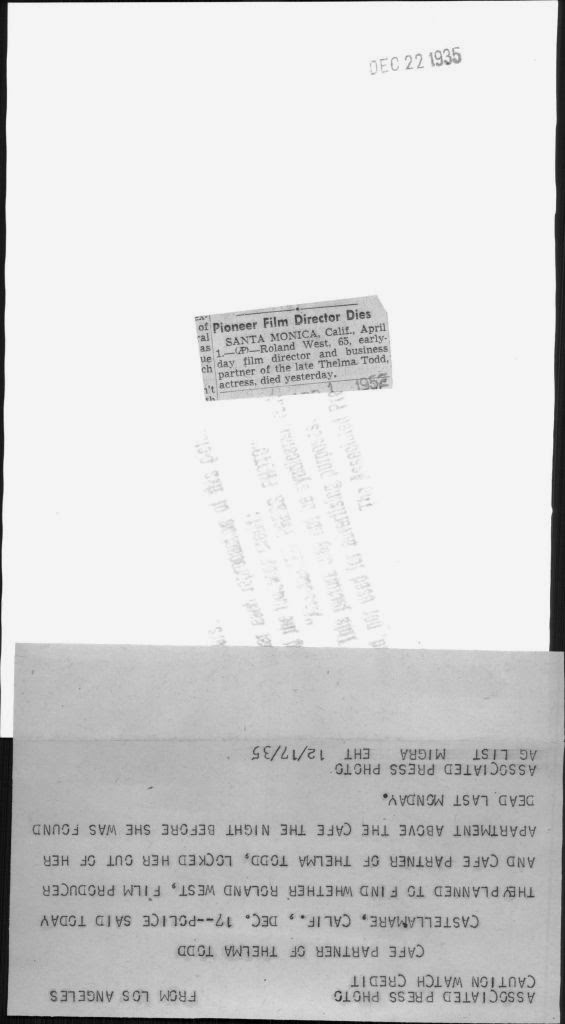 Posted by Benny Drinnon at 2:22 PM