TESTIMONY OF A DEATH By Patrick Jenning And Marshall Croddy

Another book about Thelma Todd. 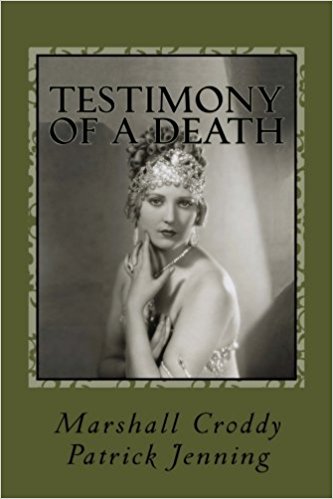 This book was published a couple of years ago, I just hadn't written about it here before. After I first read it I was very ill and had to be hospitalized for a couple of months. That was from the aftereffects of chemotherapy, however, and not from the book.

Actually this book is similar to Donati's, and comes to the same conclusion in that the authors feel that the death of Thelma Todd must have been nothing more than an unfortunate accident. They go on to say that some of the stories in other books came from things that were misunderstood or distorted in retelling, something that I had written about before.

But I do not agree with everything that is in their book. I don't like the way they were using the word "myth". A myth is something that is known to be untrue, not something that you simply do not believe. Part of the problem is that Jenning and Croddy did not prove what had actually did happen to Thelma Todd. Because of that, they can only believe in one theory and disbelieve another.*

There were conflicting stories about some things, such as the nickname "Hot Toddy". You would not know there was any controversy about that from this book, which fails to mention that some people thought that it was perfectly all right to call Thelma Todd "Hot Toddy".  Mickey Daniels called her "Hot Toddy" in the 1931 Boy Friends comedy LOVE FEVER.  Incidentally, Thelma Todd was called "Toddy" throughout SEAL SKINS, in which she called Zasu Pitts "Pittsy": they evidently called each other "Toddy" and "Pittsy" all the time, and not just when they were making this film.

The name was also used for the Andy Edmonds book. Concerning that book, Jenning and Croddy say "The tenor of HOT TODDY is inductive and imaginative, rather than deductive and critical" ( page 206 ).

Their own book is guilty of the same. The authors make references in several places to using their imaginations or "sensing" things. On page 128 we are told that "One can easily imagine" something, which is not exactly the sort of thing to say in a book that is arguing against the use of imagination in the production of what purports to be history.

One of the complaints the authors have is that Andy Edmonds depicted Thelma Todd as "promiscuous", yet on page 195 she is described as being one of Roland West's "paramours": the word implies an illicit relationship. Which was what was going on according to none other than Jennings and Croddy themselves**, they just don't like the word promiscuous. And after complaining about Thelma Todd being called promiscuous, on page 289 they put in a story that Jewel Carmen ended up being a prostitute in Mexico, which is not true.


TESTIMONY OF A DEATH does not contain information I have concerning the amphetamine tablets mentioned in the Andy Edmonds book.

"The book HOT TODDY by Andy Edmonds said Thelma Todd was taking diet pills that contained amphetamines. But diet pills containing amphetamines seem to have come into use after the second World War. Something that criticism of the book seems to have somehow missed, even though some of the same people found lots of other mistakes, some of which aren't even in there."

https://www.ncbi.nlm.nih.gov/pmc/articles/PMC2377281/
states that amphetamine tablets came into use in 1937. Widespread use ( and abuse ) of these tablets does seem to have followed the second World War.

It appears that Jenning and Croddy have themselves perpetuated this same story since they say that Thelma Todd took "pick up pills", presumably amphetamines, commonly called "pep pills".***

This association is well known and I remarked on it back when Patrick Jenning made a similar statement in a letter to CLASSIC IMAGES. Bugsy Siegel was associated with Pat DeCicco, but I don't know how far back that association went. Thelma Todd, Pat DeCicco and Patsy Kelly were all associated with Jean Malin, who was linked to Dutch Schultz and through him to Lucky Luciano... you can link them, all right, but it doesn't necessarily prove anything. I'm willing to agree that the record shows that Luciano wasn't out in California himself in that period, but I don't know if that really proves a lot, either.

All in all I prefer Donati's book, but I admit I'm biased. I helped Donati with that one.


*Page 213 says that "With Luciano, the story broadens into one of mythic proportions, with Todd combatting crime and corruption on a grand scale. Edmonds' claim that Luciano was known as 'Charley Lucifer' among his contemporaries - a fact somehow unnoticed by the chroniclers of organized crime in this century- suggest the full flowering of this fable, with Todd as a matyr opposing the devil Luciano's schemes to enslave the Hollywood community in gambling and sin." For all their talk of myths, the beliefs of Jenning and Croddy themselves have to be accepted on the basis of faith and therefore are like a religion.


**Specifically, they state that Thelma Todd and Roland West were living in sin, only they didn't use that term, either. They did refer to Thelma Todd as Roland West's "mistress" on page 242. The use of that term also implies an illicit relationship. It also implies that a woman is being supported by a man financially, which was not supposed to have been the case here.


Hollywood And The Underworld:
benny-drinnon.blogspot.com/2018/09/hollywood-and-underworld_9.html

TESTIMONY OF A DEATH discussed along with other accounts in SHOCKING AND SENSATIONAL by Julian Upton:
https://books.google.com/books?id=tixfDwAAQBAJ&pg=PA10&dq=thelma+todd+shocking+sensational+julian+upton&hl=en&sa=X&ved=0ahUKEwjH-JbD5avdAhUMRqwKHQVACTUQ6AEIJzAA#v=onepage&q=thelma%20todd%20shocking%20sensational%20julian%20upton&f=false