Hollywood And The Underworld

Abbott and Costello meet Frank Costello, as told by the daughter of Lou Costello. Reposted from "Who's On First? Abbott And Costello" on facebook. 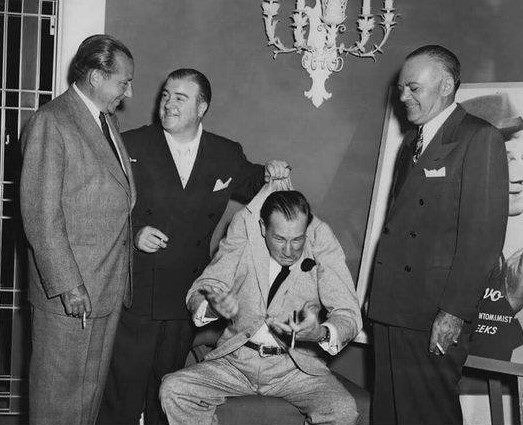 Chris Costello:
I changed the profile photo to ABBOTT AND COSTELLO MEET THE KILLER, and then found this photo of dad, Bud, and mobster Frank Costello (I believe he's far left). Called "The Prime Minister," Frank Costello was a good friend of both my dad and his brother, Pat.
In the photo here they staged a goofy shot with Bud looking as if he's ready to be carted off. The amusement on the faces of these two guys is hysterical to meas they appear so out of their element.

Dad had a favorite saying, "Only three types of people come from Paterson, New Jersey -- a comic, a priest, or a gangster!"
I recall family saying that when Costello was in town he would often visit our home and hang with dad. I was very young and cannot recall ever meeting the man, but after recently watching a documentary on Amazon on crime families, and the history of the Mafia (very good, by the way), I was fascinated by Frank Costello and how he escaped death on a couple of occasions when a hit had been put out on him.

And no, there is absolutely no relationship with Frank Costello.

Email ThisBlogThis!Share to TwitterShare to FacebookShare to Pinterest
Labels: Abbott and Costello, Frank Costello, Hollywood And The Underworld