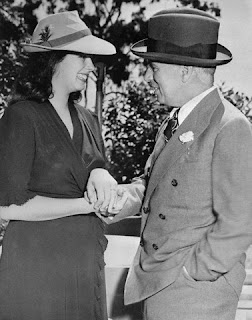 Catherine Hunter was Charlie Chaplin's secretary in the thirties and in 1936 made an uncredited appearance in MODERN TIMES as a "representative of the press".


Period newspaper articles called her "Thelma Todd's best girl pal " and said that at one point they were roommates in Hollywood. Here is something Catherine Hunter wrote about her friend Thelma Todd for one of the fan magazines.

Thelma Todd, Five Times Engaged But Never Married, Is On A Man Hunt


Not what Hollywood's done to Thelma Todd, but what Thelma's done to Hollywood! She marches into Hollywood a sedate little school marm, and presto, without a wink or a smile from Thelma, the most eligible batchelors are at her feet. But she has her method.


Now believe me, this little Toddy, despite the torrid adjective applied to her so often, NEVER gets really hot, but is terribly bothered. By all the eligible males from the Cape Cod coast from whence whe hails, and where she left a lasting impression ( judging by the optimistic Bostonians who have phoned and written regularly for five years! ) to California where she's caused as big a flurry as the gold rush of '49.


Contrary to what others have written about Thelma, she did not enter the movies via a beauty contest. Five years ago Paramount, setting up the usual hue and cry for new faces, learned of the young lady from an enamored exhibitor in her home town of Lawrence, Massachuesetts. It was he who submitted Thelma's picture. She was signed sight unseen and told to report immediately to the Long Island studios. Thelma, then eighteen, was teaching the three R's to a most enthusiastic class of boys in her home town. Even in those days her lure was felt by her young pupils, when bitter fistic enounters were staged back of the small town school house as they fought to see who was going to curry favor with "teacher" that day. And Thelma gets no bigger thrill than from the fan letters of those boy pupils of hers, who one and all have assiduously followed her career.


So you see Hollywood hasn't been the only city to feel the attraction of the special Todd brand of charm. Unlike Jean Harlow, Thelma doesn't rely on sex to put her over; nor like svelte Connie Bennett does she capture men by her languorous sophistication. No, hers is a much more insidious, dangerous fascination. For she's utterly charming - simple - natural. And naively unaware of the spell she casts. Then what IS this charm she has, you ask? I've known her well for five years and I can't define it. So I thought I'd have a talk with her about it. I'd been mulling all this over in my mind when the phone rang. She invited me to drive up to Noah Beery's trout farm - about ninety miles from Hollywood.


When we were well on the way, I popped the question.


"Thelma, what is this with you? You've had as many beaux as Solomon had wives. What is this secret of your fascination for men?"


She actually blushed. That's one of her charms, I mentally made note. Few girls can do that nowadays. And she was actually flustered. Another note in her favor. But then I knwe how Thelma dislikes talking about herself. "My fascination for men?" she asked, a little dazed.


"You heard me the first time," I replied tersely. Ours is a friendship of long standing, and like all friends, I often take advantadge of a situation. "You know you've slews of men calling you up, sending you flowers and books - inviting you out. And the when they bet all hot and bothered, you toss them cooly aside. I was always under the impression that Hollywood was a manless town till you came along. But it's girls like you who corner the market, and the rest of us females either take your left-overs - or else!"


"July 29 - the same day Clara Bow made her debut," she answered. "Maybe that's the answer. But this is too silly - let's change the subject!"


"No! It's my solemn duty to inform the great American public about this great power you have. If you haven't it, can you explain the grandest assortment of engagement rings I've ever seen? Five knock-outs that I know about. There's the emerald you got from the Boston admirer, the square cut rock you accepted from that poor San Francisco banker, to say nothing of the sapphire and diamond from the tennis champion - "


"And last eh marquiese from Abe Lyman," she tersely concluded. "Every one's been returned, hasn't it?"


"Fickle," I said unfeelingly. But I'll let you in on a secret. She's anything but. Listen to this.


"You know I'm anxious to get married - just like any other normal girl. You know the afternoons we;ve spent traipising around the suburbs looking at all the 'model homes for newlyweds'. Yes I want to get married - and have a dozen babies." This she said with wistful defiance, if you can picture that combination.


"The mother conplex?" I asked.


"Yes, if you want to call it that. Or maybe it's that old New England infulence you hear about. You see, I was fortunate in having a mother and father who were genuinely in love for sixteen years."


Her father's death is something Thelma doesn't like to talk much about. Or the horrible passing of a much-loved little brother who was crushed beyond recognition before her very eyes during a summer vacation in Vermont when they were youngsters. Tragedy has played no small part in Thelma's life, which explains her devotion to her mother with whom she lives here in Hollywood.


All she lacks is the right man. And along with the man, her heart's set on a real New Enland home, no matter how incogrous in this country so typicaly Spanish. Chintzes, hoked rugs, old mahogony. Appearances are decietful. She'd never feel comfortable in a Louis Fourteenth boudoir! And I'll let you in on something else. Right now there's a magnificent check deposited to her account in a Hollywood bank for the purchase of such a place.


"That's hard to answer off- hand. But I think one who's about ten years older than I. Who's understanding and tolerant. One who works, but also knows how to play. That's an important combination. But most essential of all, one whose intellect I can thoroughly respect, a man who will know when to cater to my whims and when not to."


"What was the matter with the Bostonian?" I asked.
"Well, the San Francisco man. He seemed most attrractive."


"He almost filled the bill, but he was insanely jealous, and you know you can't live like that."
"The insurance broker?" I went on.
"Too much of a playboy, no sense of responsibility and much too agreeable to make life intersting."
"The tennis champion?"

"Also a green-eyed monster at heart. And Abe Lyman? I had a few qualms about religion at first, but these days people are broad-minded and I dismissed that scruple. That almost materialized. As you know, I've established a trust fund for my mother and want to work another year so she'll always be comfortably provided for. I wouldn't let any man do that! And then, above everything else, as I've told you, I want a home. How could I have a permanent one anywhere in the country with his band? A traveling salesman would be equally as effective as a husband- if not so harmonious, " she said with a twinkle.
We soon arrived at Beery's. Old Noah himself, minus the ark, came tearing out.
"Thelma!" he breathed unctuously and rapturously, "how perfectly ravishing you look!" And durn it, if the girl didn't blush again. Beery raved on. Thelma was actually embarrassed.
"You are the limit - acting like a school-girl instead of an ex-school marm. If you hear that line once a day, you hear it a dozen." And s'help me, she blushed again.

Her modesty is overwhelming. One of the reasons, I'm sure, why women, too like Thelma - no small accomplishment for a "vamp" if you can apply that odious word to her. Underneath her clowning, and no one has more capacity for it than Thelma, she's a serious, straight-thinking young woman. Utterly unspoiled by all the adulation she recieves, she has that rara avis in Hollywood - a distinct inferiority coomplex. After five years I should know. She has the power of absolutely fascinating men. And do you know that these five men she's been engaged to haven't married yet? When she returned their rings, each and every one wrote back expressing heartbroken regret, assuring her of their everlasting friendship and not only that, but the old place in their hearts if she ever changed her mind. Surely a great reflection on her sincerity of charachter.
So here's giving you the low-down - all of you great he-men who read this. Thelma's on the lookout of a real person in the form of a matrimonial partner. Amd heavens! I almost forgot to tell you - she can cook! And how! So you know the requirements. If you haven't them she won't be interested. One of you lucky guys can get her. Only don't blame me if you're killed in the stampede!

On with the Big Parade!

Posted by Benny Drinnon at 4:53 PM