Thelma Todd had some problems with the studios telling her to lose weight. Although Mae West was popular in the 1930's and they observed at the time that she bucked the trend, the studios insisted that the other girls had to be thin. The problem resulted in some deaths when the dieters went too far. Let's get the skinny on this sick phenomena, which actually had it's unhealthy roots in the silent era, and unfortunately is still with us today.

That's not the way a woman's supposed to look, but that was what we were told. 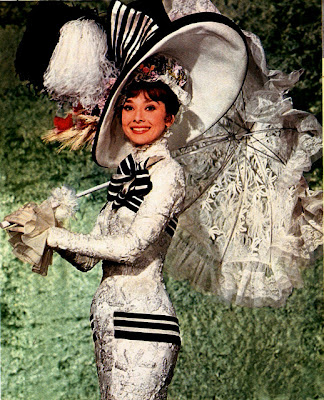 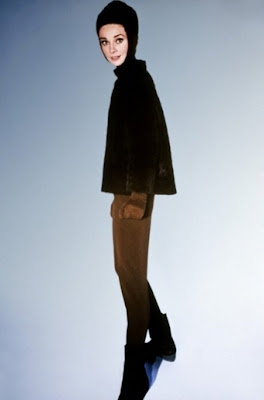 I don't know about this one, they could have distorted it to make her look even skinnier.

From edrefarral.com ( see link at bottom of page ) :

Actress Audrey Hepburn struggled with anorexia and depression - which was unknown to the public during her career. She was known to lose weight under pressure and to be "strange" about food. Rumor has it that current actresses are being "harassed" by the media who points to Audrey as an example of a thin woman without an eating disorder, but that was NOT the case!

A little on Anorexia from Wikkipedia:

From Wikipedia, the free encyclopedia
Jump to: navigation, search
For other uses, see Anorexia nervosa (disambiguation) and Anorexia (disambiguation).
"Anorexic" redirects here. For the use of the term as an appetite suppressant, see Anorectic.
Anorexia nervosa is an eating disorder characterized by an obsessive fear of gaining weight. The terms anorexia nervosa and anorexia are often used interchangeably, however anorexia is simply a medical term for lack of appetite. Anorexia nervosa has many complicated implications and may be thought of as a lifelong illness that may never be truly cured, but only managed over time.
Anorexia nervosa is often coupled with a distorted self image[1][2] which may be maintained by various cognitive biases[3] that alter how the affected individual evaluates and thinks about her or his body, food and eating. Persons with anorexia nervosa continue to feel hunger, but deny themselves all but very small quantities of food. The average caloric intake of a person with anorexia nervosa is 600–800 calories per day, but extreme cases of complete self-starvation are known.[4] It is a serious mental illness with a high incidence of comorbidity and the highest mortality rate of any psychiatric disorder.[5]
Anorexia most often has its onset in adolescence and is most prevalent among adolescent girls. [6] However, more recent studies show that the onset age of anorexia decreased from an average of 13 to 17 years of age to 9 to 12. [7] While it can affect men and women of any age, race, and socioeconomic and cultural background,[8] Anorexia nervosa occurs in females 10 times more than in males.[9] While anorexia nervosa is quite commonly (in lay circles) believed to be a woman 's illness, it should not be forgotten than ten per cent of people with anorexia nervosa are male.
The term anorexia nervosa was established in 1873 by Sir William Gull, one of Queen Victoria's personal physicians.[10] The term is of Greek origin: an- (ἀν-, prefix denoting negation) and orexis (ὄρεξις, "appetite"), thus meaning a lack of desire to eat.[11] However, while the term "anorexia nervosa" literally means "neurotic loss of appetite" the literal meaning of the term is somewhat misleading. Many anorexics do enjoy eating and have certainly not lost their appetite as the term "loss of appetite" is normally understood; it is better to regard anorexia nervosa as a self-punitive addiction to fasting, rather than a literal loss of appetite.


The problem is sometimes severe enough that it results in death. Marie Prevost was such a case. 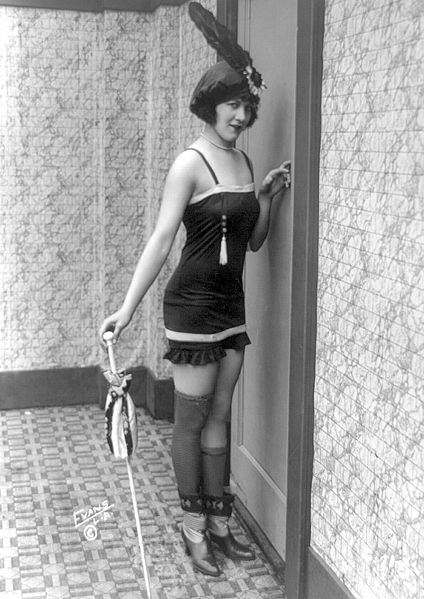 They said she wasn't thin enough 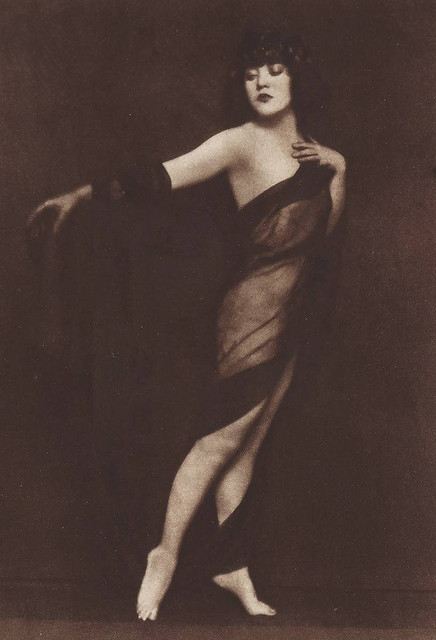 Marie Prevost died of starvation in the 1930's, trying to lose weight for the movies.

Marie Prevost (November 8, 1898 – January 21, 1937) was a Canadian-born actress of the early days of cinema. During her twenty year career, she made 121 silent and talking pictures.

Born Mary Bickford Dunn in Sarnia, Ontario, she was still a child when her family moved first to Denver, Colorado and then later to Los Angeles. While working as a secretary, she applied for and obtained an acting job at the Hollywood studio owned by Mack Sennett. Sennett, who was from a small town outside of Montreal, dubbed her as the exotic "French girl", adding Dunn to his collection of bathing beauties under the stage name of Marie Prevost.
In 1919, Prevost secretly married socialite Sonny Gerke who left her after six months of marriage. Gerke's mother had forbidden him to associate with Prevost because she was an actress, so he was scared to tell his mother of the marriage—and he couldn't get a divorce without revealing that he was married. Prevost, fearful of the bad publicity a divorce would cause, would stay secretly married to Gerke until 1923.[1]

One of her first publicly successful film roles came in the 1920 romantic film Love, Honor, and Behave, opposite another newcomer and Sennett protégé, George O'Hara. Initially cast in numerous minor comedic roles as the sexy, innocent young girl, she worked in several films for Sennett's studio until 1921 when she signed with Universal.[2] At Universal, Irving Thalberg took an interest in Prevost and decided to make her a star. Thalberg ensured that she received a great deal of publicity and staged numerous publicity events. After announcing that he had selected two films for Prevost to star in, The Moonlight Follies (1921) and Kissed (1922), Thalberg sent Prevost to Coney Island where she publicly burned her bathing suit to symbolize the end of her bathing beauty days.[3]
While at Universal, Prevost was still relegated to light comedies. After her contract expired, Jack Warner signed her to a two year contract at $1500 a week at Warner Bros. in 1922. During this time, Prevost was dating actor Kenneth Harlan. Jack Warner had also signed Harlan to a contract and cast the couple in the lead roles in F. Scott Fitzgerald's The Beautiful and Damned. To publicize the film, Warner announced that the couple would marry on the film's set. The publicity stunt worked and thousands of fans sent gifts and letters to the couple. The Los Angeles Mirror got wind that Prevost was still married to Sonny Gerke and ran a story with the headline "Marie Prevost Will be a Bigamist if She Marries Kenneth Harlan". Warner was livid over the negative publicity and Prevost's failure to disclose her first marriage despite the fact that the publicity stunt was his idea. Warner quickly arranged an annullment and, when the publicity surrounding the scandal died down, Prevost and Harlan were quietly married.[4]
In spite of the bad publicity, Prevost's performance in The Beautiful and Damned brought good reviews. Director Ernst Lubitsch chose her for a major role opposite Adolphe Menjou in 1924's The Marriage Circle. Of her performance as the beautiful seductress, Ernst Lubitsch said that she was one of the few actresses in Hollywood who knew how to underplay comedy to achieve the maximum effect.[5] This performance, praised by The New York Times, resulted in Lubitsch casting her in Three Women in 1924 and in Kiss Me Again the following year. c. 1923
Just as her career was blossoming, Prevost's mother was killed in an automobile accident while traveling in Florida with actress Vera Steadman, another Canadian friend, and Hollywood studio owner, Al Christie in 1926.

Devastated by the loss of her only remaining parent, Prevost began drinking heavily and developed an addiction to alcohol. Her marriage to Harlan ended in a 1927 divorce. Prevost tried to get past her personal torment by burying herself in her work, starring in numerous roles as the temptingly beautiful seductress who in the end was always the honorable heroine. After seeing Prevost in The Beautiful and Damned, Howard Hughes cast her as the lead in The Racket (1928). During filming, Hughes and Prevost had a brief affair. Hughes quickly broke off the affair leaving Prevost heartbroken and furthering her depression. After playing the lead in The Racket, Prevost's days as a leading lady were over.[6]
Prevost's depression caused her to binge on food resulting in significant weight gain. By the 1930s, she was working less and being offered only secondary parts. A notable exception was Paid (1930), a role which, while secondary to star Joan Crawford, still garnered her good reviews. As a result of all this, her financial income declined and her growing dependency on alcohol added to her weight problems. By 1934, she had no work at all and her financial situation deteriorated dramatically. The downward spiral became greatly aggravated when her weight problems forced her into repeated crash dieting in order to keep whatever bit part a movie studio offered.

On January 21, 1937, at the age of 38, Prevost died from heart failure brought on by acute alcoholism and malnutrition. Her body was not discovered until January 23, after neighbors complained about her dog's incessant barking. A bellboy, who ignored the note Prevost posted on the door asking that no one knock on the door more than once, finally forced the door open. Prevost was found lying face down on her bed, her legs marked with tiny bites. Prevost's pet dachshund, Maxie, had nipped at her legs in an attempt to wake her up.[7]
Her funeral (which was paid for by Joan Crawford) at the Hollywood Memorial Cemetery was attended by Crawford, Clark Gable, Wallace Beery, and Barbara Stanwyck among others.[8]
In February 1937, it was discovered that Prevost's estate was valued at only $300[9] prompting the Hollywood community to create the Motion Picture & Television Country House and Hospital to provide medical care for employees of the television and motion picture industry.[10]
For her contribution to the motion picture industry, Marie Prevost has a star on the Hollywood Walk of Fame at 6201 Hollywood Boulevard


The well-known story from HOLLYWOOD BABYLON was analyzed at www.findadeath.com:

"Taken directly from the book Hollywood Babylon, comes this Kenneth Angerism: "Her romantic looks didn't fit her Bronx (false) honk, and blonde (probably false) Marie tried to down her heartbreak in bourbon. Marie dragged on until 1937 when her half-eaten (false) corpse was discovered in her seedy (false) apartment on Cahuenga (false) Boulevard. Her dachshund had survived by making mincemeat of his mistress (false). Aside from being a well known work of fiction, it is a good picture book, and in it you will find proof indeed that Marie was not consumed by her pooch, but it looks more like the worried dog was trying to wake her. Warning, if you don't want to see Marie's corpse, do not click here. You can see, she was intact."

We find many mistakes in HOLLYWOOD BABYLON, although it is frequently cited as a source by many other authors. But Marie Prevost was in fact a starved star. 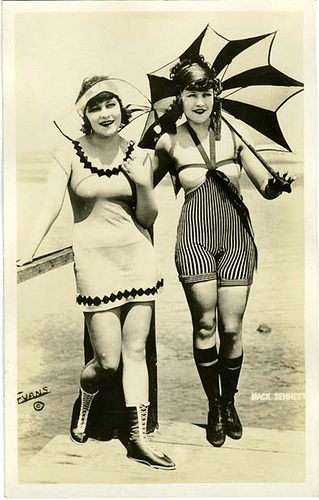 Phyllis Haver isn't as thin as Marie Prevost, and to me she looks better. 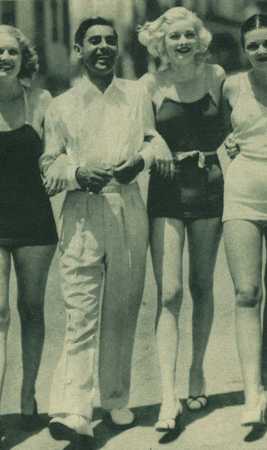 Early in her career, Lucille Ball dieted to the point that it harmed her health. Notice how thin her legs are in this picture from ROMAN SCANDALS, with Eddie Cantor. 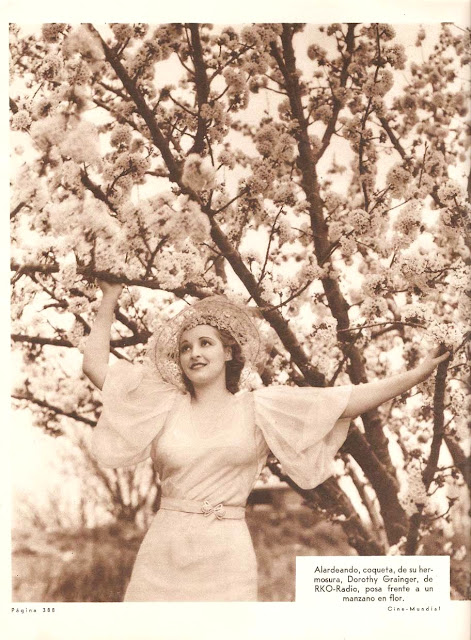 Dorothy Granger
Some beautiful girls seem to have mostly appeared in comedies because they weren't considered to be skinny enough for the other movies. Dorothy Granger was one, Marie Wilson was another. I still remember a scene in THE BIG BROADCAST OF 1938 where Martha Raye admired herself in front of a mirror and said, "What a shape!" A lot of the men thought so, too, but that wasn't what the movies usually had in them.

The problem of anorexia is still with us today. So are unrealistic expectations of what a woman should look like that appear to be based on victims of starvation. 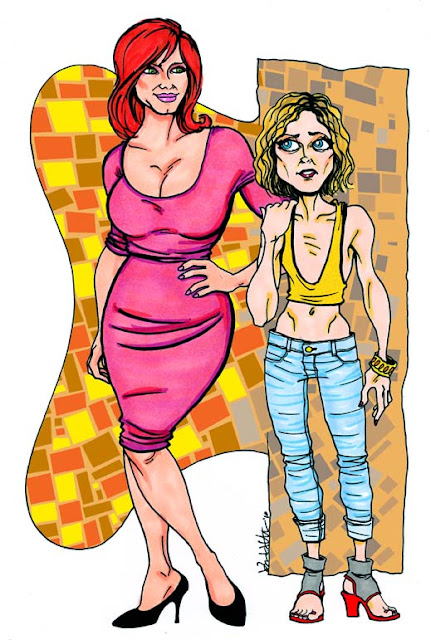 http://www.findadeath.com/Deceased/p/marieprevost/prevost.htm
Posted by Benny Drinnon at 11:55 AM