Four Jills In a Jeep And Friends 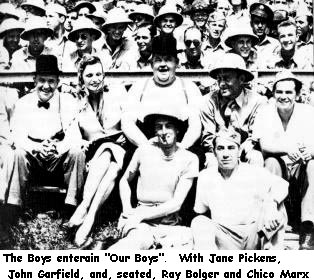 From Wikipedia, the free encyclopedia
The Hollywood Victory Caravan was a three-week railroad journey of 1942 that brought a number of famous performers across the United States to raise money for war bonds. Along the way there were numerous stops, which coincided with parades, performances, and other events. Some performers were present for the entire journey, others joined or left as their schedules permitted. Members of the Caravan were received by Eleanor Roosevelt at the White House.
Performers included Laurel and Hardy, James Cagney, Bing Crosby, Bert Lahr, Pat O'Brien, Groucho Marx, Claudette Colbert, Cary Grant, Bob Hope, and Desi Arnaz.
A comedic 19-minutes short was made in 1945 to celebrate the event which starred many of the celebrities.

The Hollywood Victory Caravan toured the Carribean on a converted Army bomber termed "The Flying Showboat."

Shown in this astounding photo is the full cast of entertainers deployed to
cheer up our boys overseas during WWII. The prominent group included Eddie
Dowling President of Camp Shows, Ray Bolger, Mitzi Mayfair, Louis Polanski, Stan
Laurel, Oliver Hardy, Jane Pickens, Benay Venuta, and Show M.C. John Garfield.
They are all shown just before taking off from Mitchel Field, NY, in a U.S. army
bomber, converted into a "flying showboat", for a two week tour of Caribbean
bases w they will present "Live Shows" for army and navy men. This would be the
first stop on the first USO Tour.

They traveled around the U.S. by train.

Bert Lahr, the Cowardly Lion without the costume. He made some short subjects in the 1930's, as did Bing Crosby. Jimmy Cagney had a brother William, who was in the movie PALOOKA with Thelma Todd and Lupe Velez. 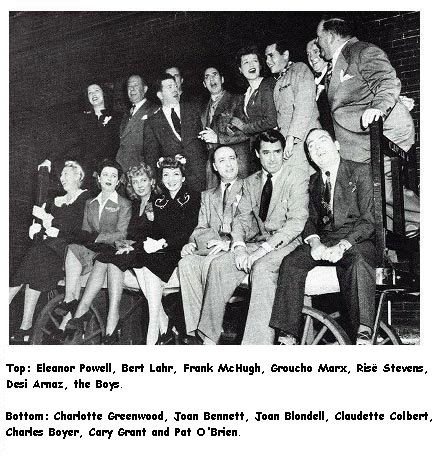 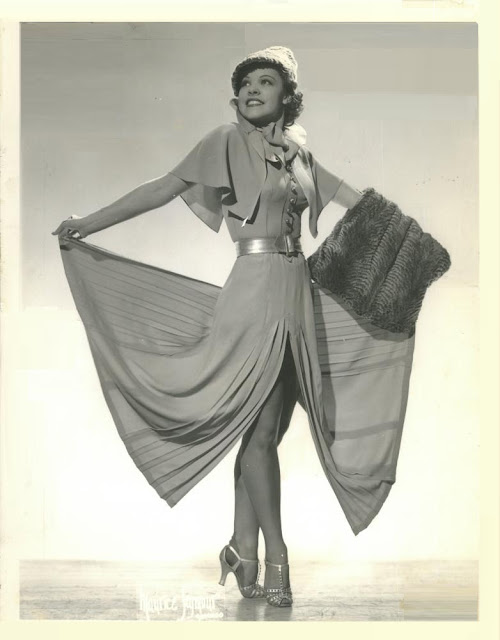 Mitzi Mayfair as she looked in the 1930's. In addition to dancing on Broadway, she made some short subjects in Hollywood at that time.

Allthough Mitzi Mayfair had been in "The Hollywood Victory Caravan" earlier in the war with Laurel and Hardy, she is remembered more today for her later tour with Kay Francis, Carole Landis, and Martha Raye, which was dramatized in the movie FOUR JILLS IN A JEEP. The film version was actually based on an account given by Mitzi Mayfair, rather than on the book by Carole Landis that had the same name and covered the same events. 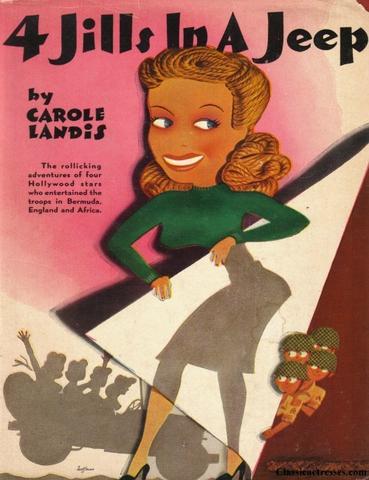 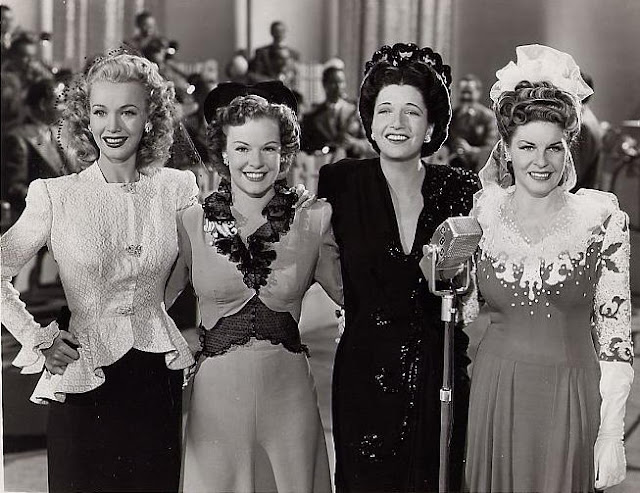 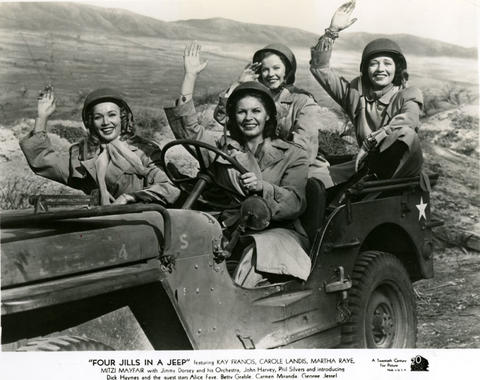 Lobby card for the movie.

Four Jills in a Jeep. 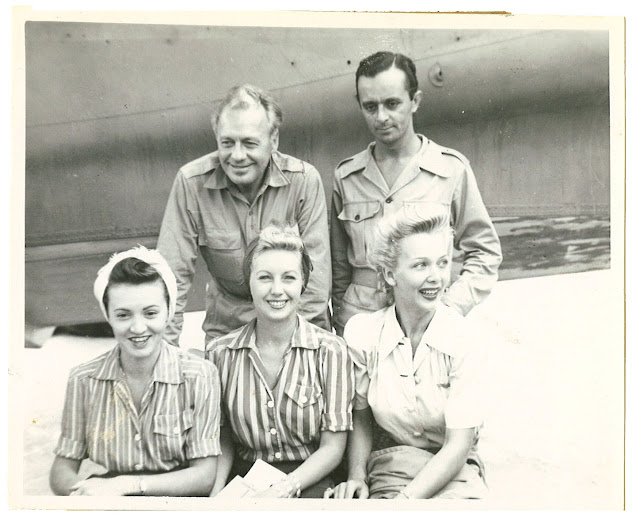 Although Hollywood made a movie based on their exploits, the "Four Jills" were not really appreciated by Hollywood. They didn't seem to do well in the movies after the war, despite the sacrifices they had made and the hardships they had endured to help our fighting men. Carole Landis contacted Malaria and amoebic dysentery and was never really the same again.

The sad fate of Carole Landis has been covered in a number of books on "Hollywood's Unsolved Mysteries", including the ones by former Hollywood reporter John Austin. I was able to communicate with John Austin myself a few years ago. Here is an e mail message that he sent me on August 5, 2002 concerning Carole Landis:

"I knew Carole very well toward the end of WWII and her camp shows
and, in fact,as a Special Service Officer for the U.S, Army, travelled
with
her and her troupe through the North African Campaign and, later in
Great Britain.

I also saw a lot of her when we both returned to California following
WWII and the filming of Four Jills In A Jeep. Unfortunately, Carole had
"bad
press," aka word of mouth, from a coterie of gossiping Bel Air matrons
and was also
unfortunate in her choice of men such as the slimy, pompous Englishman
Rex
Harrison. He led her down the
garden path and. eventually, to her death even though she was pregnant
with his child.

It was too bad. She was a wonderful person, beautiful, and a good,
journeyman actress. I have thought about her a lot her since her
death because we had a good time together in London at the end of the
war.

The poorly explained death of Carole Landis continues to raise questions to this day. Rumor had it that she had killed herself because she'd gotten pregnant and didn't know what to do, which was the same story that was told about Lupe Velez. But according to the records, Carole Landis was not pregnant and suffered from a medical condition that prevented her from having children.

There was also some doubt as to if she had actually comitted suicide. Some members of her family thought that she was murdered.

Rex Harrison's own testimony made it sound as if she was still alive when he found her and then he did nothing to help her, although the usual version had it that she was already dead when he got there. No one seemed to worry at the time that he had at very least failed to report a death of someone he had professed to love.


Special thanks to my brother Dale for digitally restoring the picture of Mitzi Mayfair in the 1930's. And special thanks to the many men and women who made many sacrifices during World War II in order that the country might be saved.

The fan club I have for Carole Landis 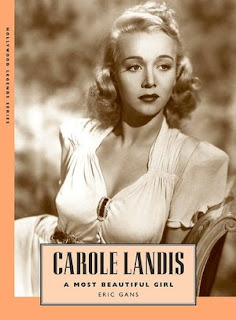