UNACCUSTOMED AS WE ARE

Thelma Todd was with Laurel and Hardy in their first talking picture in 1929.

Unaccustomed As We Are


Unaccustomed As We Are is the first sound comedy short film starring Stan Laurel and Oliver Hardy released on May 4, 1929.

Ollie brings Stan home for dinner, a very unwelcome surprise for Mrs. Hardy who storms out in a huff. Mrs. Kennedy, a neighbor from across the hall, offers to help the boys cook dinner; they, in turn, help to set her dress on fire. Mr. Kennedy, a cop, returns home and the boys hide the slip-clad Mrs. K. in a trunk. Unaware that his wife is within earshot, Mr. Kennedy starts bragging to the boys about his extramarital liaisons.

Unaccustomed As We Are is notable for being Laurel and Hardy's first sound film (the title was drawn from the popular cliché "Unaccustomed as we are to public speaking ..."). The soundtrack was lost for 50 years until it was traced on disc in the late 1970s. A silent version, with intertitles, was also released, as well as a Victor disc (featuring a synchronized music score and sound effects).[1]
This is the first film in which Hardy says to Laurel, "Why don't you do something to help me!" which became a catchphrase, repeated in numerous subsequent films. Also heard for the first time is Stan's distinctive, high-pitched whimper of distress.[1]
The plot of Unaccustomed As We Are was expanded into the feature film Block-Heads in 1938. In addition, the gag of the spaghetti ending on Ollie's lap was originally conceived for their 1928 silent film Habeas Corpus, but was left unfilmed.[1]

Early sound movies tended to be static, frequently confined mainly to interior sets with little or no camera movement, because of problems related to recording sound. They looked something like filmed versions of stage plays. It took a while for them to learn to make movies the way they had before and make movies with more movement and still be able to record sound, and for things to more or less get back to normal.

For a while, stage people were sought after for talking pictures as they had experience with speaking lines. Mae Busch had been a stage actress, something that no doubt helped her in this part of her career.

Laurel and Hardy's were able to adapt successfully to sound movies and evidently were less troubled by the transition than some of their contempoaries. Thelma Todd had already made talkies at this time, beginning with SEVEN FOOTPRINTS TO SATAN, and with Edgar Kennedy would be in the next at the Roach studio, HURDY GURDY.

Thelma Todd also made some talkies with Harry Langdon at Roach's during this period, but Langdon didn't seem to have Laurel and Hardy's success at that studio, and his series soon came to an end. But he would return, at one point replacing Stan Laurel in a movie with Oliver Hardy. 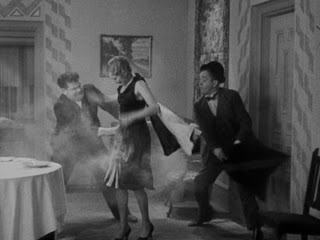 Thelma Todd Screen Captures From UNACCUSTOMED AS WE ARE:
http://www.lordheath.com/index.php?p=1_54_Thelma-Todd

Posted by Benny Drinnon at 1:01 PM

Email ThisBlogThis!Share to TwitterShare to FacebookShare to Pinterest
Labels: Hal Roach, Laurel and Hardy, Mae Busch, UNACCUSTOMED AS WE ARE