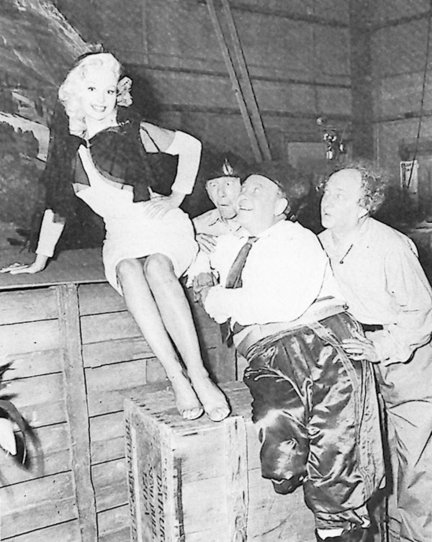 Greta Thyssen (born Greta Thygesen on March 30, 1933) is a Danish-born American film actress and former model. Born in Copenhagen, Denmark, she appeared in films and television shows between 1956 and 1967.

Thyssen arrived in the United States after winning the Miss Denmark crown in 1952. She attempted to follow in the footsteps of the reigning blonde sex symbols Marilyn Monroe and Jayne Mansfield by forging a movie career. She was Monroe's double in Bus Stop,[1] and appeared in Accused of Murder, Terror Is a Man, Journey to the Seventh Planet, and Three Blondes in His Life. In addition to her appearance on the television show Dragnet, she appeared as Roxy Howard, the title character in the third Perry Mason episode, "The Case of the Nervous Accomplice." Thyssen also appeared on Broadway in Pajama Tops as a replacement for June Wilkinson.[2]
Thyssen is probably best remembered for her appearances in the Three Stooges films Quiz Whizz, Sappy Bull Fighters and Pies and Guys. In her brief stint with the Stooges, she endured a cream pie to the face in the latter film. After appearing in Cottonpickin' Chickenpickers in 1967, Thyssen retired from acting.

Thyssen was married three times. Her third marriage was to Theodore Guenther produced one child in 1969.
As of June 2010, Thyssen resides in New York.[3]


Greta Thyssen was just beautiful. She was amazing. In BUS STOP they had her double for Marilyn Monroe so it would look as if Marilyn Monroe was built that way.

Why didn't they just use Greta Thyssen in the role? Hollywood doesn't work that way.

Of course, they did have Greta Thyssen in other roles. Some of  her best remembered roles were in the films of The Three Stooges. They always did use some of the best girls in those films. 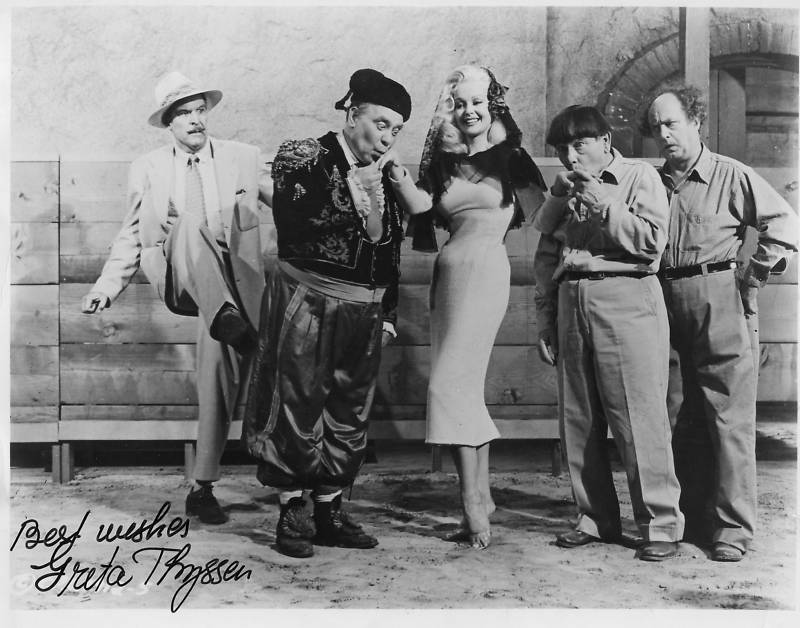 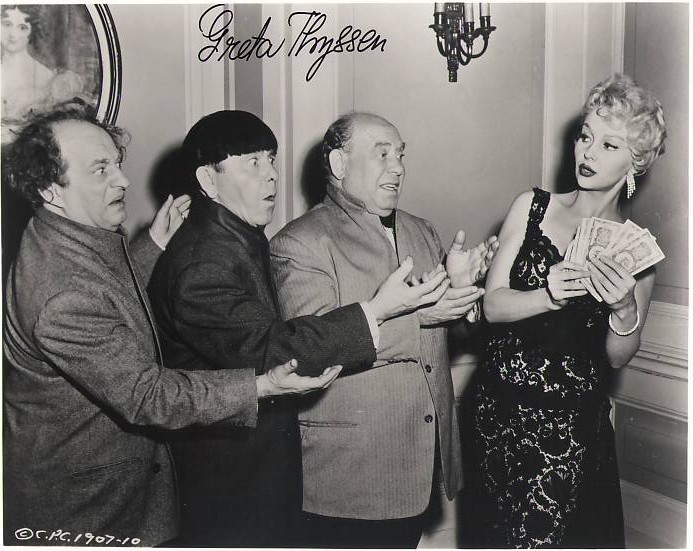 Oh, no, Moe! That's not the way to give Greta some cake! 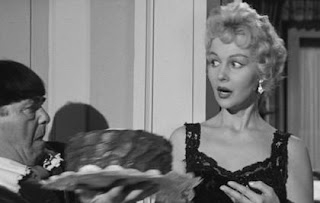 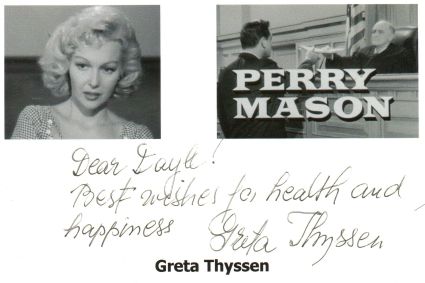 One of Greta Thyssen's earliest roles was "The Pirate Girl" on the television show TREASURE HUNT. The idea was later reused in the movie HOW TO SUCCEED IN BUSINESS WITHOUT REALLY TRYING, which had Maureen Arthur play a "Treasure Girl" on a fictional television program in the story.
You see many pictures of Greta Thyssen with other celebrities of the period.
Jayne Mansfield and Greta Thyssen
Greta Thyssen ( right ) with Jeanne Carmen at Ciro's  nightclub in Hollywood. 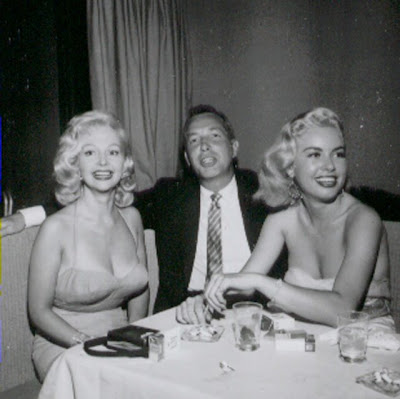 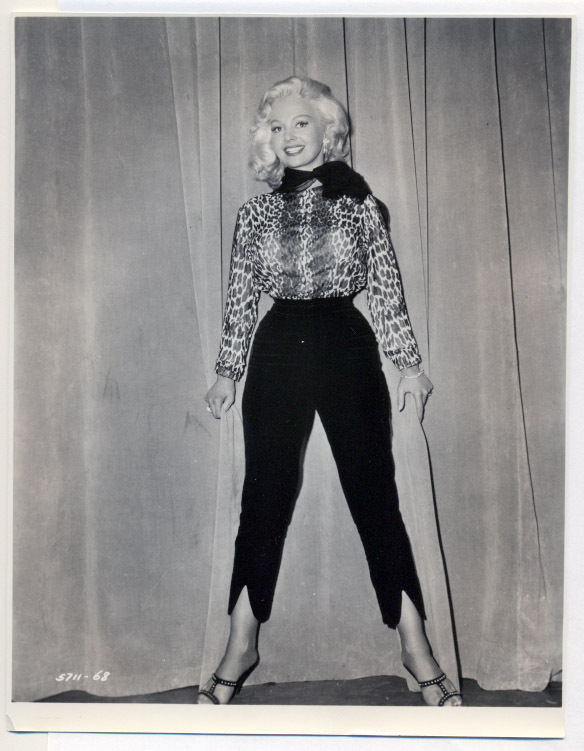 TERROR IS A MAN was a story about an experiment that sought to turn an animal into a man. 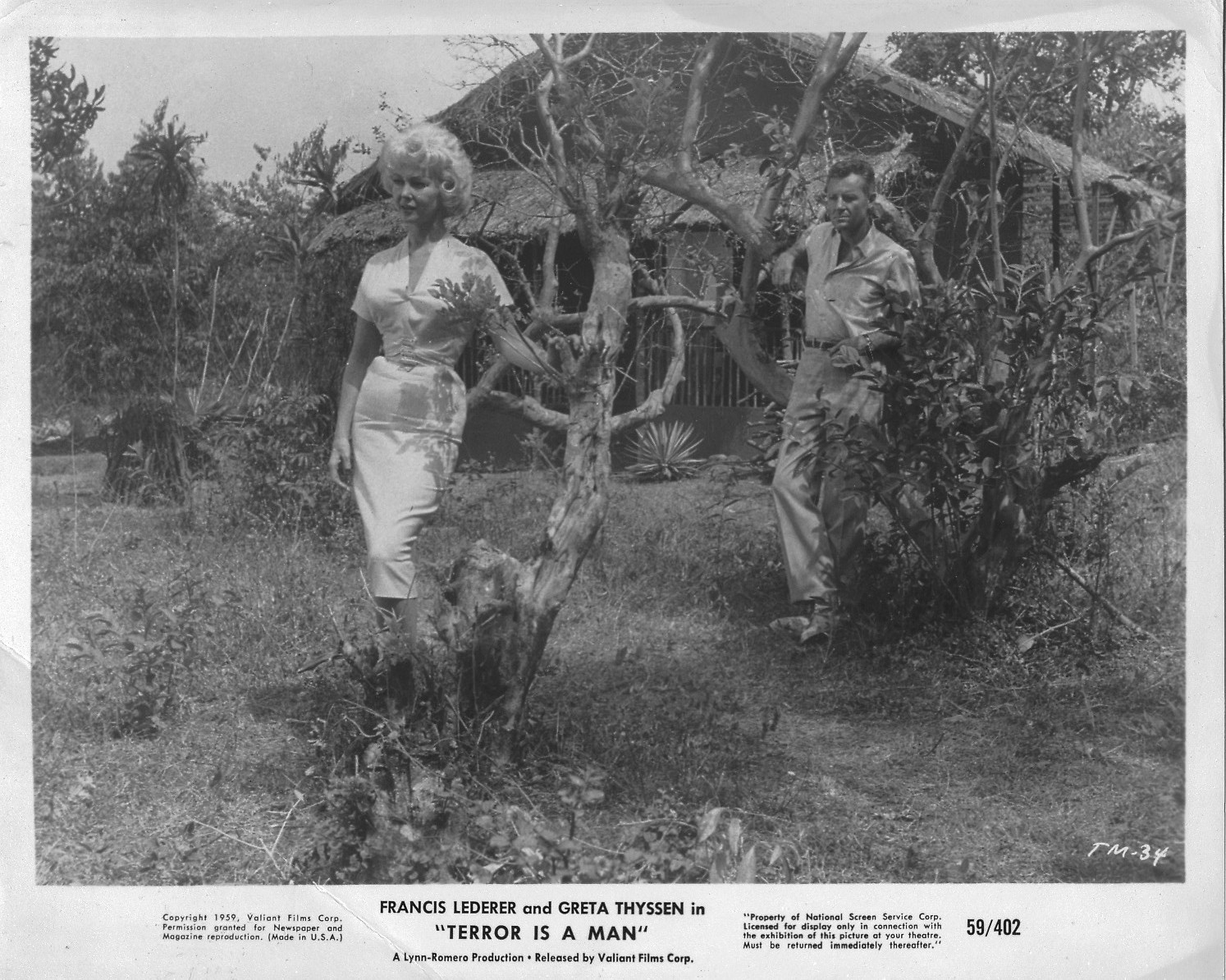 The story was fantastic. And so was Greta. 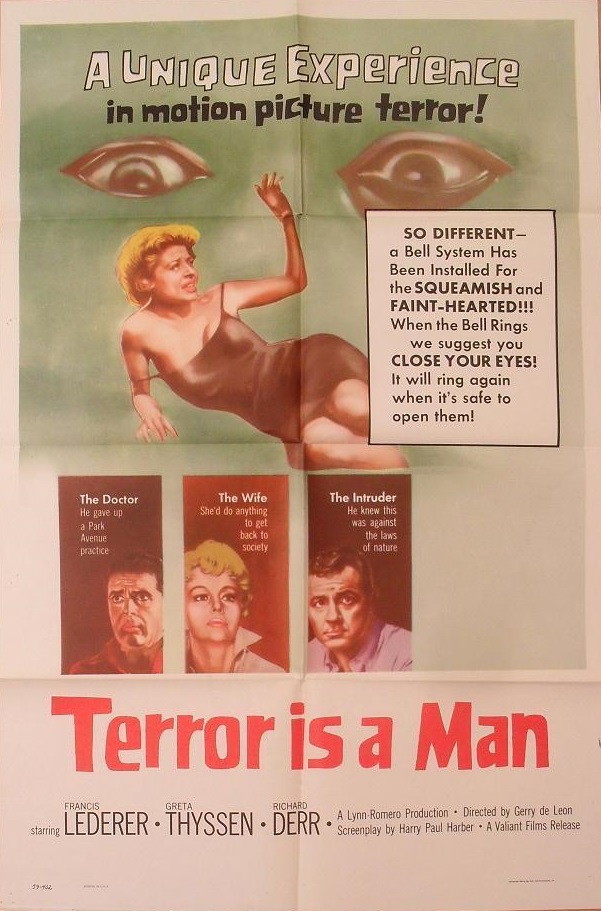 That poster doesn't do her justice.
I'd go ape for Greta myself. 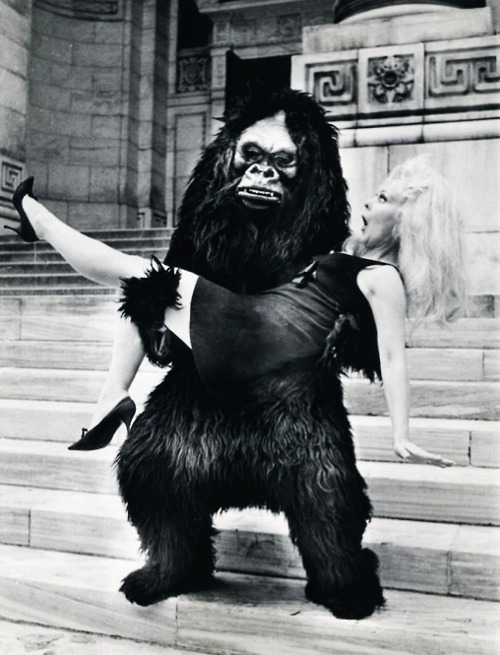 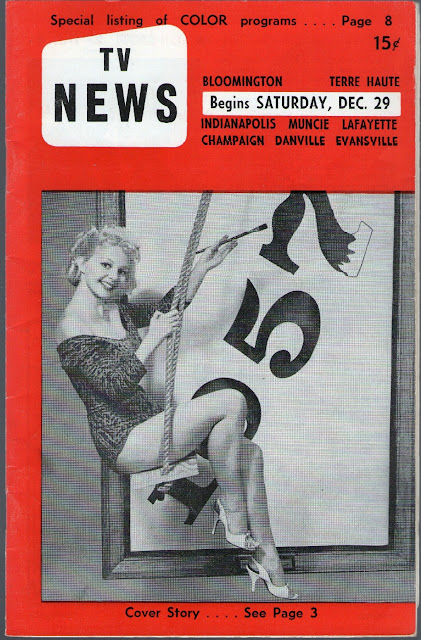