The Hal Roach studio had a 20th anniversary celebration. Here is an article about the party and a translation by Jorge Finkielman from the original Portuguese.


This is a partial translation of the article dealing with the party, omitting the opening dealing with the history of the studio. The grammatical structure of the original text was not really good but I tried to keep it anyway. Apologies for mistakes and necessary changes to make this as comprehensible as possible in English


In the meantime all of you, my dear readers, do you want to know a bit about the party isn't that true? I will drop here a few of my own impressions.

The first to come to talk with me, giving me a cordial and kind salute, was the delightful Florine McKinney. She, in person, is more beautiful and more interesting than in her Metro-Goldwyn-Mayer films. She danced all night with W.S. Van Dyke, the Metro director. And he was very apprehensive, looking at us laughing and lively talking, so she herself took me to him and officially introduced us... Now, Mr. Van Dyke!

Jean Harlow was brilliant. What a difference with the Jean that had spoken with me one year ago. She wasn't that mischievous child in pajamas... She had a very elegant outfit and was the attention of all eyes. She was the most fascinating, until Thelma Todd appeared with an even more elegant dress!

By the way of her hairstyle, everything in small pieces I think that she had to spent more than five hours to get ready for the big night!

And her dress, really, was giving the perfect impression of a fishing net... and how many people would not let caught... if it wasn't that there was also Pat de Cico, her husband, a taller guy than a goal-keeper and as strong as George O'Brien.

But, in truth he spent a long minutes in intimacy like Patsy Kelly, Thelma's new comedy partner and... in person the greatest person I met! You should see Patsy Kelly at a short distance. She is stupendous and really funny, specially, due to her way to say and describe misadventures.

Theda Bara and her husband, Charles Brabin, the famous director... Ruth Roland and Ben Bard, always kind and friendly to me. What a happy couple and since Ruth is still lovely despite the many years we saw her in serials. Harold Lloyd and Mildred Davies were seated in the same table with Ben Lyon and Bebe Daniels. It could be that Harold remembered his times when Bebe was his partner and both worked in that same studio?

Bebe changed a lot. She is still nice, a beauty -especially due to here very black and fascinating eyes... Ben Lyon looked like a college boy. He was always laughing and seemed to have a nice disposition. Bebe and Mildred, for a while, talked a lot -like any mother of this world- about their own kids and their things!

But - the highlight of the party arrived when Will Rogers and Groucho Marx decided to join a Hawaiian trio and perform old songs. A circle was formed around them!

Will is the most natural creature and without Hollywood stereotypes. Everybody was wearing a tuxedo - Will appeared with his blue coat and a black tie! It seems that he never combs his hair - just like Stan Laurel in his comedies; although off screen he spends a lot of grease to comb himself!

Kent Taylor, whom you'll see soon in Paramount's CRADLE SONG, is in person a nice and elegant guy, he was very happy. He partnered with a group and keep up with fashion. And today he is famous, nice and sentimental. The Last Round-Up, a typical western song, was performed by a trio to which everybody joined in the chorus. Laughter increased and the party turned more animated.

It wasn't a few more minutes when Stan Laurel joined a group headed by Will Rogers. He was enthusiastic and was asking to the circle what song did they wanted...

Stan Laurel was laughing hysterically. I have never such a happy comedian: he seemed to be dismissing the legend that said that comedians were serious gentlemen, devoted students of philosophy...

How many film celebrities... Raymond Griffith (remember him? what a great comedian?) danced several times with a wonderful blonde girl. I tried to figure out who was she. Finally, I found it - it was Sally Rand! That Sally was involved in several trials in Chicago due to her famous fan dance. Maybe you know about it... She danced but that meant nothing. The thing was that the puritan societies felt that the big feather fans that she used, hardly (ah!) as a dress, didn´t cover her enough!

But, looking at her so beautiful and elegant, who would not defend Sally Rand against any puritan society of this world?

Mother Harlow was as "platinum blond" as her daughter, that dangerous Jean, and - do you know how she treats to the beloved star? - Just by the name of Baby! O more than BABY! There were speeches! But, since Hollywood speeches are different - all with flair of jokes and good humor! Nobody attempted to say great sentences or to quote Latin or Greek writings! Will Rogers, who many people misunderstand the way he talks to the highest and more respected citizen, being sarcastic with Louis B. Mayer.

Louis B. Mayer is very tied with American politics. He was a friend and promoter of Hoover and his own friends are always politicians... Will talk, then, on the radio and said: "Oh, my dear listeners, what a great party we have here! Just movie people - the best simple people! Imagine that there is not among us a senator nor a representative. My friend, Louis B. Mayer, throws big parties. Just a few days ago, he made homage to Marie Dressler - but there were two senators, a governor... and another political figure... Here, no - just people and simple people like all of you! A splendid party! I came here to frankly talk many who are here, just to eat the desert of this feast... I may not have the guts to admit it! I came, also, because I was a Hal Roach employee... Yes, I made some films for him and I could still be here working if he would have not, one day, seen one of my films...

Polly Moran. Believe me, she never stopped for a second - and she was sad in the place when nobody talked to her. Polly was the first to push for conversation. She talked since she sat on the table. She laughed a lot and liked to tell her more or less peppered anecdotes! When they brought the big piece of the anniversary cake, she made a racket and screaming to the other side of the immense hall - she protested to Hal Roach because instead of cake they should have brought a "pie"!

Her husband does not laugh and talk much. Both were in front of my place. Among them, Ruth Roland, Ben Bard, Stan Laurel and other friends were seated. Mr. Malone is a nice guy. He possess as Polly's son, who should be by now forty and makes no secret of that. He seems to be the one who enjoys the most her jokes and feminine good humor. I was even thinking that he should have been a Polly Moran "fan" and in order to not spend money buying movie tickets to see her, he solved the issue in the best way - he married her!

Polly is one of the most popular figures among Hollywood professional photographers - since nobody else than her is in all of the nightly places of the movie city. Photographers, one by one, came to our table asking her to pose. Polly gets ready for the pose and - when one of them is about to shoot - she screams: "And be certain that my brilliants are appearing... I want my friends to see that I am making money now with my films...! And so, this is the way Polly Moran is, wild, talkative and inimitable in her pranks.

And the dances continued... with the sound of several orchestras that followed one to another, cocktails reached to the top of the heads... the laughter was prolonged... and the happiness reached its top... and the night was slowly ending... to give its place to a new day!

And the Hal Roach party left unforgettable memories, memories for all of those who were there...


The article as it originally appeared. 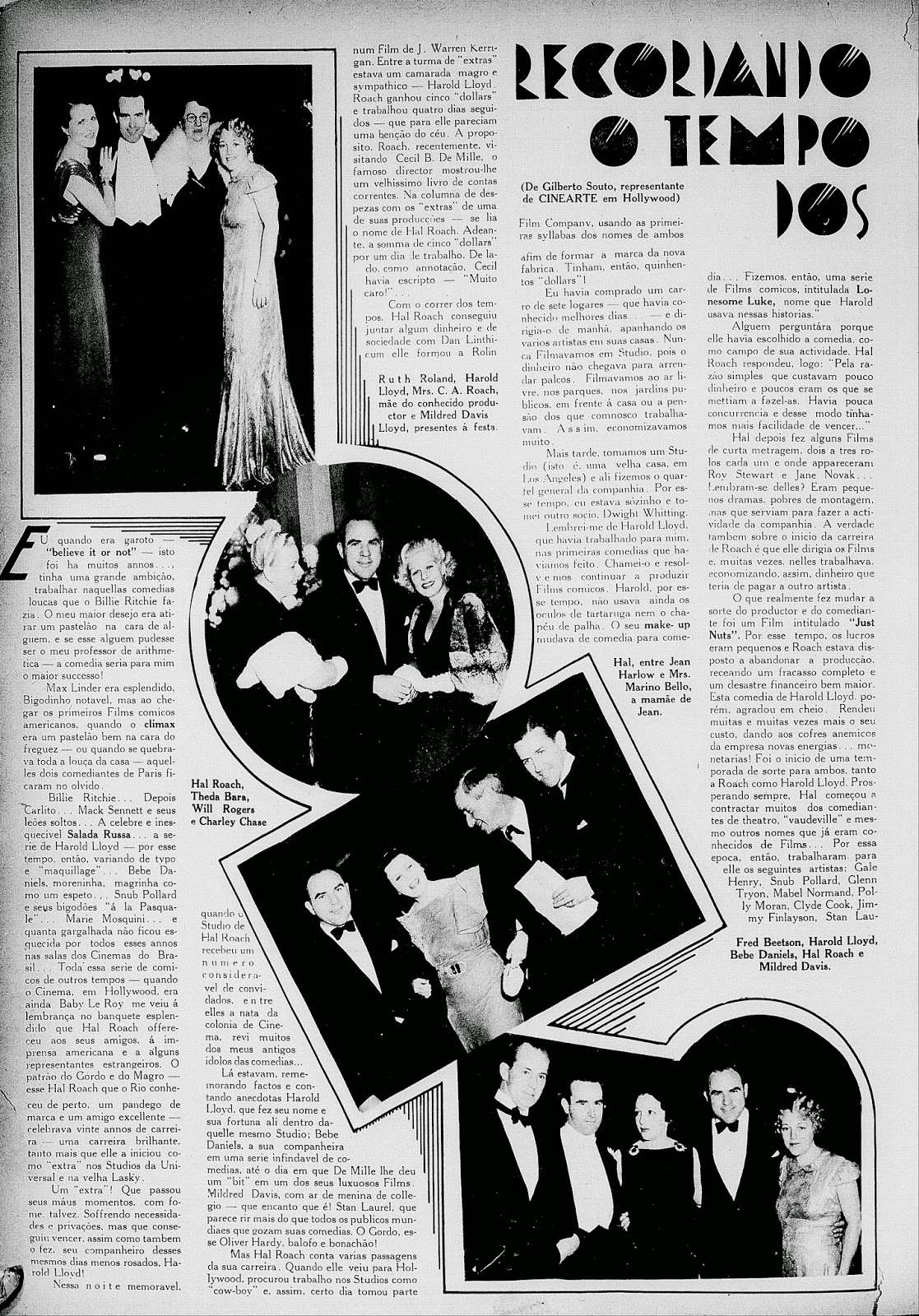 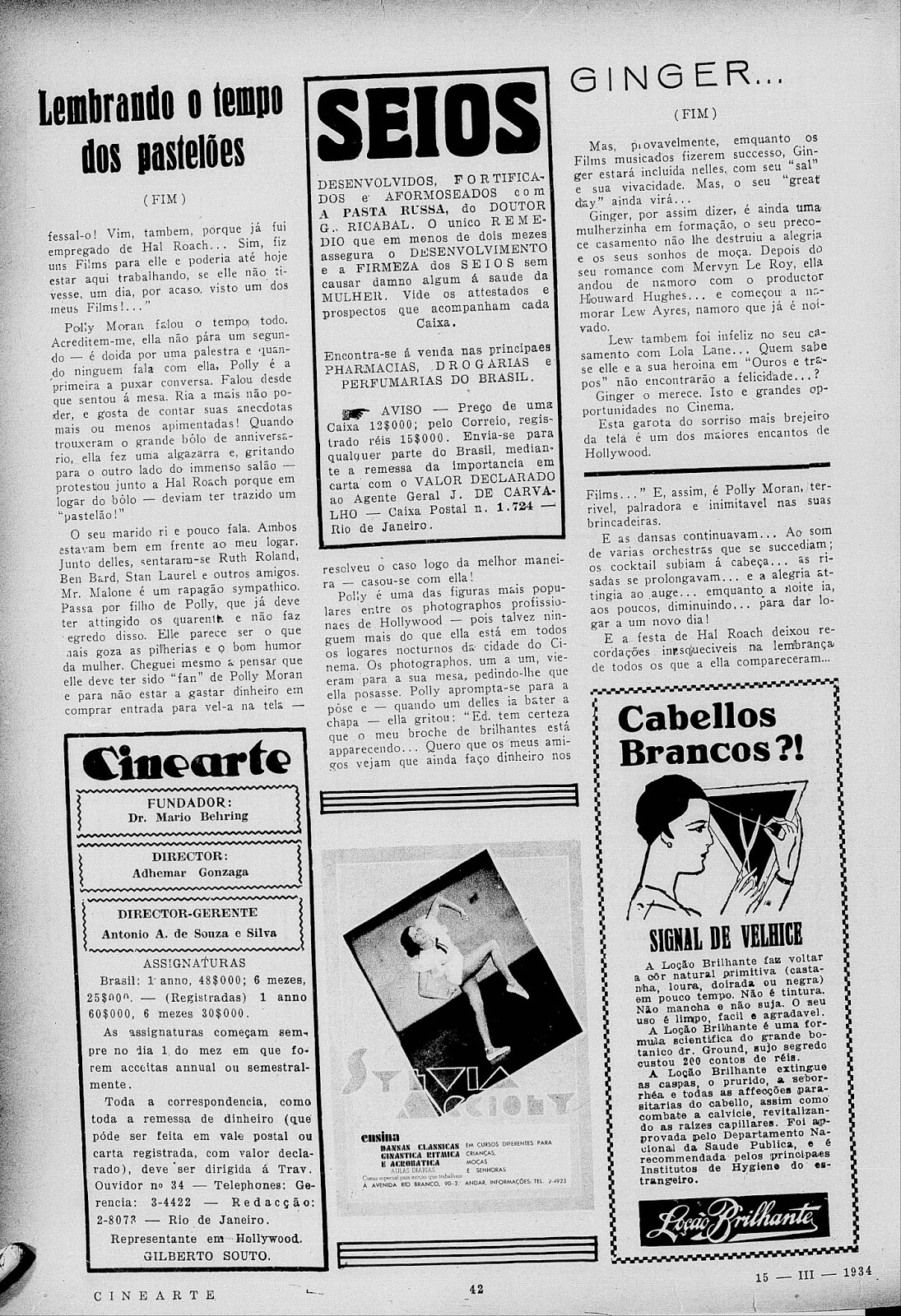