Here is something about Michelle Morgan's new book. 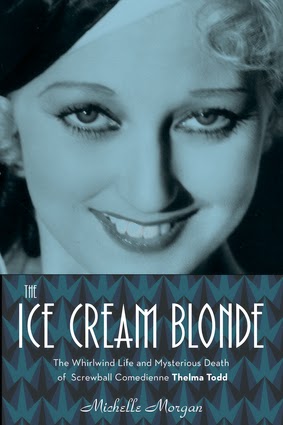 9781613730386
Media Copy
Overview
A beloved film comedienne who worked alongside the Marx Brothers, Laurel and Hardy, and dozens of others, Thelma Todd was a rare Golden Age star to successfully cross over from silent films to "talkies." This authoritative new biography traces Todd's life from a vivacious little girl who tried to assuage her parents' grief over her brother's death, to an aspiring teacher turned reluctant beauty queen, to outspoken movie starlet and restaurateur. Increasingly disenchanted with Hollywood, in 1934 Todd opened Thelma Todd's Sidewalk Café, a hotspot that attracted fans, tourists, and celebrities. Life appeared charmed for the beautiful Hollywood rebel when, just 29 years old, Todd was found dead in a garage near the café. An inquest concluded that her death was accidental, but in a thorough new investigation that draws on FBI files, interviews, photographs, and extortion notes—much of these not previously available to the public—Michelle Morgan offers fresh evidence surrounding Todd's death, proving what many people have long suspected, that Thelma was murdered. But by whom? The suspects include Thelma's movie-director lover, her gangster ex-husband, thugs who were pressuring her to install gaming tables in her popular café, and a new, never-before-named mobster. Coinciding with the 80th anniversary of Todd's death, the publication of The Ice Cream Blonde is sure to interest any fan of Thelma Todd, Hollywood's Golden Age, or gripping real-life murder mysteries.