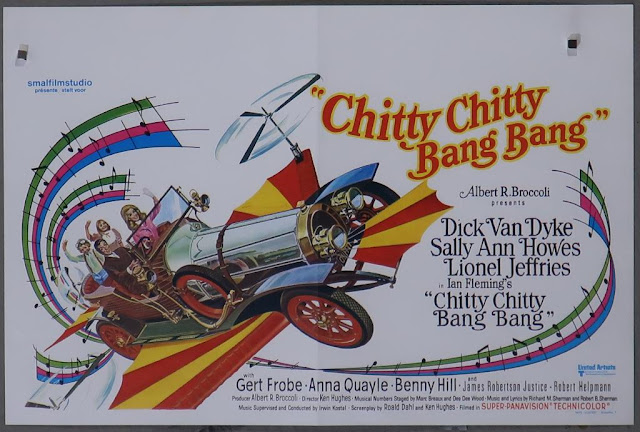 The 1968 movie CHITTY CHITTY BANG BANG could be seen as related to Thelma Todd because the producer was Pat DeCicco's cousin Cubby Broccoli. Then there's the character that was played by Anna Quayle. 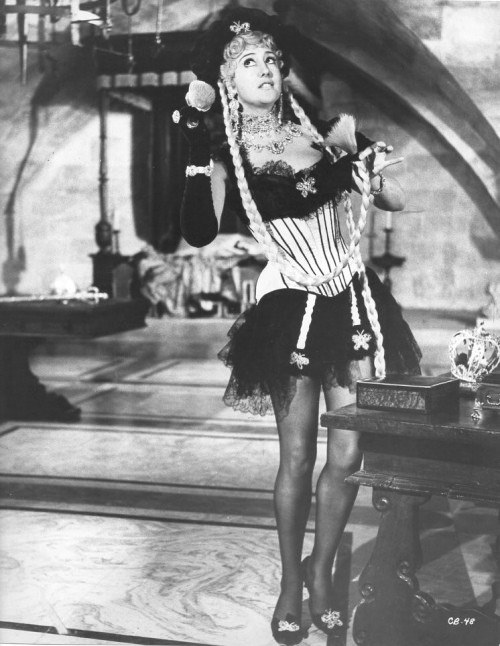 In CHITTY CHITTY BANG BANG, Anna Quayle plays "Baroness Bomburst", who does a song and dance number dressed in her underwear with a hat on. Reminds me of some of the publicity pictures of Thelma Todd in SPEAK EASILY. 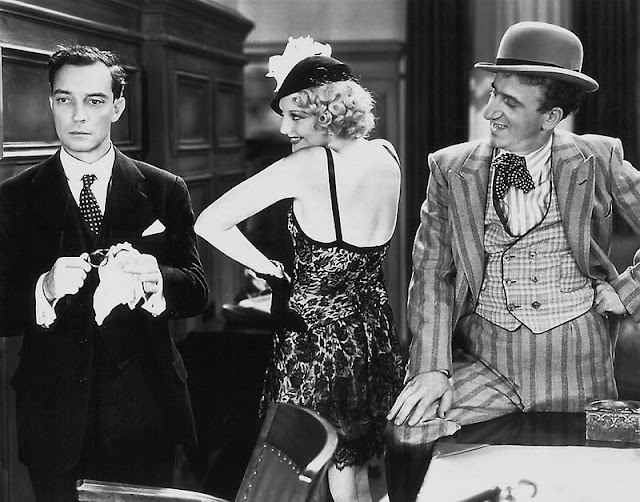 Anna Quayle's fluttery hand gestures appear to have been lifted from Zasu Pitts, who was teamed with Thelma Todd in a series of two-reel comedies at the Hal Roach studio.

It's like they were combining Thelma Todd and Zasu Pitts in one character. 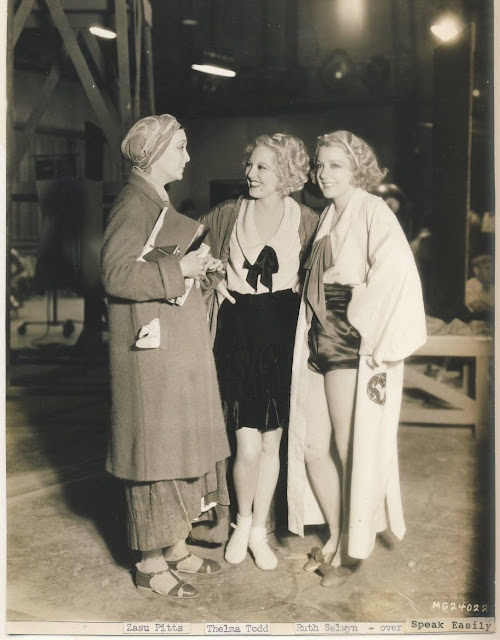 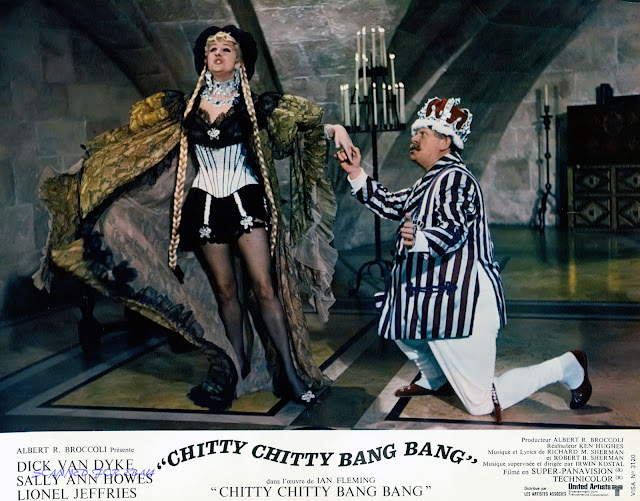 Instead of another girl, the Baroness is teamed with a Baron.
They are the main villians in the movie, although they aren't in the original book. Since he keeps trying to kill her you would have thought that she would have been considered a victim, .but it's presented as humor. And in what is supposed to be a movie for kids.

On the other hand, the movie starred Dick Van Dyke, who admired and emulated Stan Laurel, and it's not impossible that they were putting in other elements that were related to Stan Laurel without any thoughts of revenge.

It still looks bad. Especially in what was supposed to be a movie for little kids.

We discussed this business on yahoo in the Thelma Todd Club on Yahoo and later the Anna Quale Club, where the supposed humor involving murder attempts on Anna Quayle was not well thought of.

My brother Dale posted these messages in the Anna Quayle Club, in which he discussed the problems with this movie and it's historical connections:

"My brother Benny noticed something which has not been discussed here...Anna Quayle in that movie bore a striking resemblance to 1930s actress-commedienne Thelma Todd: he has a group for her. Thelma had a series of comedy short subjects teamed up with Zasu Pitts, whose trademark hand-fluttering gestures the Baroness also uses.
Cubby Broccoli was related to Pasquale "Pat" DiCicco, the man who was married to Thelma Todd, and both Pat and Cubby were in turn Married to the Mob. Some people say that The Mob had Thelma murdered to keep her in line, Pat happened to have an alibi. Since there was that kinship between Pat and Cubby, it is almost certain that any resemblances to Thelma that remain in Chitty Chitty Bang Bang were DELIBERATELY added.
And actually, Roald Dahl has made a carreer out of making Children's books and Children's movies out of those books. And under the veneer of Make-believe, they are ALL full to the gills with Sick Stuff.
Best Wishes, Dale D."

"I sent in links to the Wikipedia article when I discussed this earlier and there were photographs. The historical woman the Baroness character was based on was Eleonore Reuss of Kostriz, Princess-Consort of Bulgaria:
http://en.wikipedia.org/wiki/Eleonore,_Princess_Reuss-K%C3%B6stritz

Following the death of his first wife, Marie Louise of Bourbon-Parma, Ferdinand sought another wife to carry out the official duties required of the consort of a head of state. As a homosexual with no requirement to produce further heirs, Ferdinand stipulated to his assistant that he wanted a bride who did not expect affection or attention. A list of candidates was whittled down to Eleonore and she and Ferdinand subsequently married in Coburg on 28 February 1908. Initially entitled Princess of Bulgaria, Eleonore assumed the title Tsaritsa on 5 October 1908 following Bulgaria's declaration of independence from the Ottoman Empire.

Eleonore had presumably been carefully pre-informed of Ferdinand's sexual preferences and it is debatable whether the marriage was ever consummated. Certainly, Ferdinand demanded separate bedrooms for himself and Eleonore while guests of King Carol I of Romania during their honeymoon. As it was, Eleonore remained neglected by Ferdinand throughout their marriage, leaving her to raise her stepchildren and devote herself to the welfare of the Bulgarian people. Eleonore came into her own during the Balkans and First World Wars when, working tirelessly as a nurse, she was a cause of great comfort for many injured and dying Bulgarian soldiers. It was said that she had 'a special gift for relieving suffering'.

"Tsaritsa Eleonore became seriously ill during the final years of World War I, dying in Euxinograd, Bulgaria on 12 September 1917. Her last wish was to be buried in the cemetery of a 12th-century church at Boyana, near Sofia. This was granted. During the Socialist period the grave was dug, her jewelry stolen and then the decorative stones bulldozed back in the hole, with no visible marks left over the ground. However after the democratic changes in 1989, the original stones were excavated and the site was restored back to the original state."

--It would seem that the original was not considered a physical beauty but she had a great beauty of spirit.

And the central problem to all of this is WHY on EARTH did the author Roald Dahl choose THIS particularly unpleasant situation to add to a supposedly children's movie? The man had to have some severe problems of his own to focus on this situation-the author had basically carte blanche to choose any time period in the 20th century to set his story in and he chose THAT?? And the way the story plays out (with the attempted killings) was also not necessary, the author had to put that in there DELIBERATELY.

Since we have no Psychiatric examination records for Dahl we probably will never really know WHY-but the point is, Why is it even necessary to ASK Why? Why is it relevant to anybody or anything else to know why this sickness was even promulgated and passed off as humor in the first place?

Why was this sickness promulgated and passed off as humor in the first place?

That I do not know.

But it would have been better if they had never done it in the first place.