Another one that I put on the blog a while back and forgot about. The program is still available online. 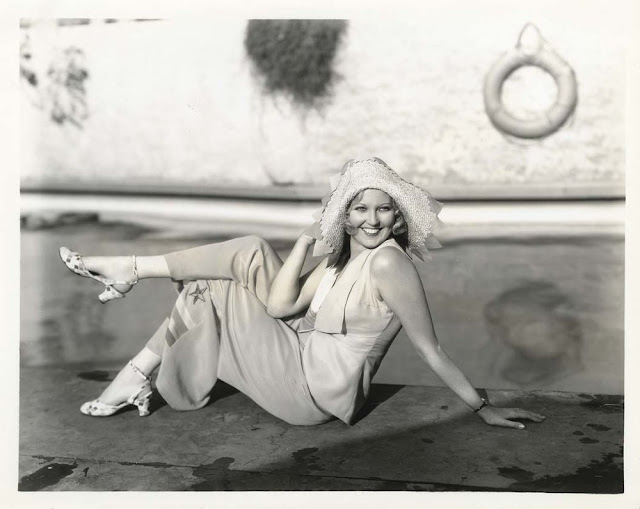 
Reference is made to a "Bloodthirsty District Attorney", which doesn't seem appropriate here. The District Attorney's office was notorious for calling questionable cases "suicides". Perhaps they were thinking of the Grand Jury Foreman, who did consider the case to be murder.

The "unusual clause" about Thelma Todd being thin was not really unusual as they made all the girls get skinny. It was considered an important enough problem that a series of articles was written about it in PHOTOPLAY magazine.

A "Mistress" is a kept woman: Roland West didn't support Thelma Todd financially. Although Jewel Carmen was called Roland West's "wife", Donati has said the two don't actually seem to have been married, in which case Roland West was simply involved with more than one woman rather than being married to one and having another one on the side.

Accident theory repeatedly called "eminently reasonable" while discussing Roland West: not everyone thought so well of it at the time. That theory was criticized for assuming that Thelma Todd didn't know of the dangers of carbon monoxide while it's dangers were well known and had been covered in the news.*

The impression is given that the Mafia was linked to the case because of something Roland West said: actually the gangsters had been mentioned earlier in the investigation.

The Grand Jury investigation did not reach a conclusion as stated. The case actually ended with a hung jury. The jurors were split between the suicide and murder theories, with none of them believing that it had been an accident.

Pat DeCicco said to have "no" ties to the Mafia: he at very least was associated with people with known underworld connections, such as George Raft.**

Roland West was retired and did not have his career ended by scandal as has frequently been said.

DA's office said to have tried to drag out the investigation: usually the story is that they wanted to get it over as quickly as possible. and that they had a history of doing that.

Some people call everything "forgotten", which seems kind of odd. Obviously somebody remembered it in order to make the program. "Obscure" seems more appropriate.

* I thought Donati's explanation seemed more reasonable than what they were saying at the time. Donati said that she must have fallen asleep in the car and then started the car upon awakening without opening the garage doors first.

Email ThisBlogThis!Share to TwitterShare to FacebookShare to Pinterest
Labels: Death Of Thelma Todd