Joyce Compton tells the story of her life in this letter to her fans. 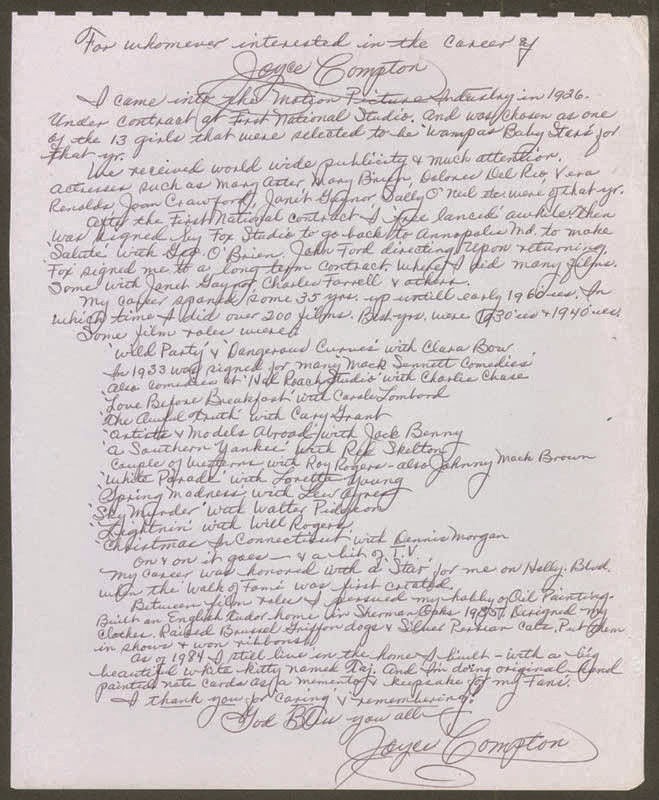 JOYCE COMPTON
Joyce Compton signs an autograph autobiography. Autograph Autobiography signed "Joyce Compton" twice, 1p, 9½x11¾. In full: "For whomever interested in the career of Joyce Compton: I came into the Motion Picture Industry in 1926. Under contract at First National Studio and was chosen as one of the 13 girls that were selected to be 'Wampas [Western Academy of Motion Picture Advertisers] Baby Stars' for that year. We received world wide publicity & much attention. Actresses such as Mary Astor, Mary Brien, Dolores Del Rio, Vera Renolds, Joan Crawford, Janet Gaynor, Sally O'Neel etc. were of that yr. After the First National contract I 'free lanced' a while, then was signed by Fox Studio to go back to Annapolis Md. To make 'Salute' with Geo.O'Brien. John Ford directing. Upon returning, Fox signed me to a long term contract. While I did many films, some with Janet Gaynor, Charles Farrell & others. My career spanned some 35 years up until early 1960ies.. In which time I did over 200 films. Best yrs. were 30ies and 40ies. Some film roles were: 'Wild Party' & 'Dangerous Curves' with Clara Bow; In 1933 was signed for many Mack Sennett Comedies; Also comedies at Hal Roach Studio with Charlie Chase; 'Love Before Breakfast' with Carole Lombard; 'The Awful Truth' with Cary Grant; 'Artists & Models Abroad' with Jack Benny; A Southern Yankee' with Red Skelton; Couple of Westerns with Roy Rogers - also Johnny Mack Brown; 'White Parade' with Loretta Young; 'Spring Madness' with Lew Ayres; 'Sky Murder' with Walter Pidgeon; 'Lightnin' with Will Rogers; 'Christmas in Connecticut' with Dennis Morgan On and on it goes - & a bit of T.V. My career was honored with a Star for me on Holly. Blvd. When the 'Walk of Fame' was first created. Between film roles I pursued my hobby of Oil Painting. Built an English Tudor home in Sherman Oaks 1935. Designed my clothes. Raised Brussel Griffon dogs & Silver Persian cats. Put them in shows & won ribbons. As of 1984 I still live in the home I built - with a big beautiful white kitty named Taj. And I'm doing original hand painted note cards as a memento & keepsake of my fans. I thank you for caring and remembering. God Bless you all - Joyce Compton". Joyce Compton (1907-1997) broke into films in the late silent era (1924) and made no fewer than 125 movies before retiring by the age of 50. She often played comic supporting roles. Among her best films were The Awful Truth (1937) and Sky Murder (1940). Between films, Compton designed her own clothes and engaged in her hobby of oil painting. She later designed hand-painted note cards as keepsakes for her fans. Lightly creased along right edge. Fine condition.