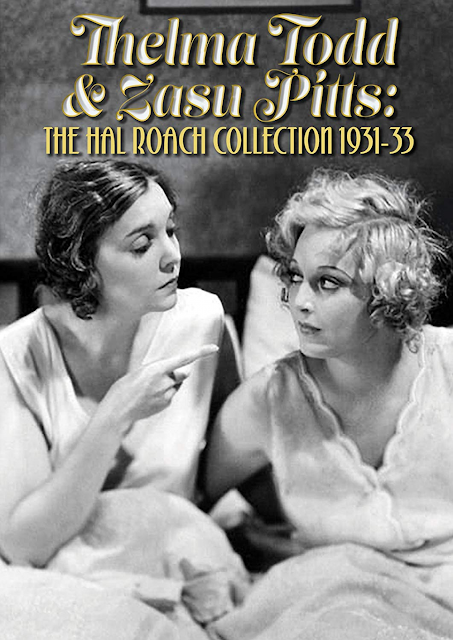 This set has commentaries by Richard M. Roberts, Randy Skretvedt, Brent Walker and Robert Farr. But I have to say that I do not agree with everything that they said. Unless Zasu Pitts actually said that communists should be castrated, they were guilty of misrepresentation.

The first three films or so had commentaries that didn't say much about Thelma Todd or Zasu Pitts, they just kept saying they'd get around to it later. They mentioned that there was a radio station at the studio, but failed to mention that Todd and Pitts had their own radio show while the series was in production.  A little about Zasu Pitts was spread over more than one of the commentaries, and then they had a little about Thelma Todd during the very last one. They failed to mention that she was seen as a popular type during the 1930's, like Jean Harlow and Joan Blondell at other studios, or that she was considered the queen of the lot at the Hal Roach studio. For some reason, Thelma Todd's petticoat was called a "negligee" repeatedly in the commentaries, although the two are not the same thing.

There was a recurring thread in the commentaries that physical humor wasn't funny when done by women.

Not everyone agrees. I don't. I thought Thelma Todd and Zasu Pitts were funny, but that some of the men in the same films were not funny. Thelma Todd and Zasu Pitts appeared to be having fun. It didn't come across as something that should be taken seriously. Charlie Hall, on the other hand, did not strike me as funny when he punched Bud Jamison in THE SOILERS. That looked serious. And when Guinn "Big Boy" Williams shot Blanche Payson in WAR MAMMAS ( 1931 ) that didn't strike me as funny either. That looked even more serious, and if there was supposed to be some reason why she wasn't killed in the story*, I think the commentary should have made some sort of explanation. Which they failed to do.

The impression that I got was that they either did not like Thelma Todd or had no interest in her. At one point they mentioned Donati's book when they were talking about Anita Garvin, but from what they said you would never know that it was a book about Thelma Todd. Incidentally, Randy Skretvedt's is the author of a book about Laurel and Hardy which has some information on Thelma Todd, as well as Anita Garvin and others who were at the Hal Roach studio.


*They could have said the gun was loaded with blanks.