THE FLYING IRISHMAN is a 1939 movie based on the real-life exploits of Douglas "Wrong-Way" Corrigan, who made a transatlantic flight to Ireland and claimed that he had gone the wrong way by mistake. Dorothy Appleby and Joyce Compton appear in the film with Corrigan and there was some publicity at the time about Dorothy Appleby making him flub his lines. 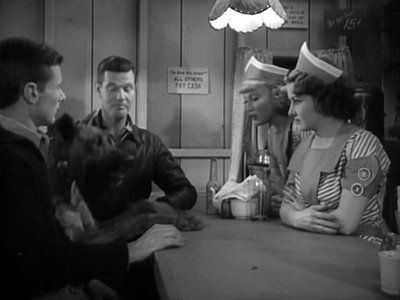 Douglas "Wrong-way" Corrigan as himself, with Joyce Compton as "Sally" and Dorothy Appleby as "Marybelle", the two girls at the diner in the story.


To me it sounded like what was going on behind the scenes was better than what they have in the movie. I would have liked to have seen that stuff where Corrigan was flubbing his lines because of Dorothy Appleby.